Tributes pour in for former US secretary of state Colin Powell 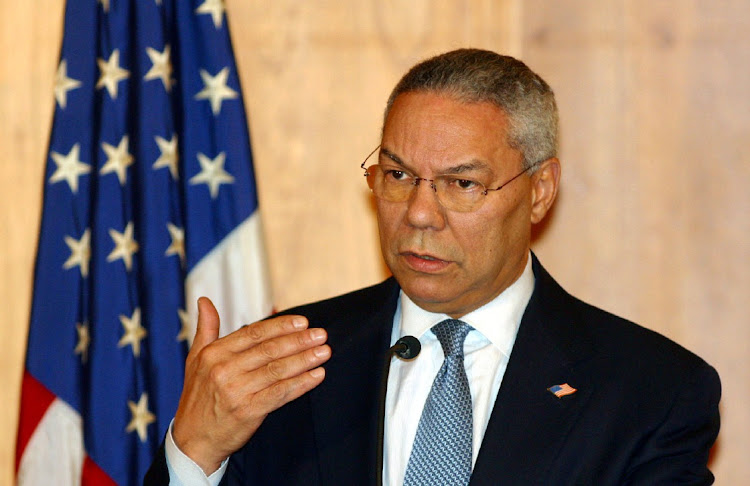 Washington — Colin Powell, the first black US secretary of state and top military officer, died on Monday at the age of 84 due to complications from Covid-19.

Powell was one of the US’s most prominent black figures for decades. He served three Republican presidents in senior posts and reached the top of the US military as it was regaining its vigour after the trauma of the Vietnam War.

A moderate Republican and a pragmatist, Powell was the top US general when US-led forces drove Iraqi troops from Kuwait in 1991 and the chief US diplomat when the US invaded Iraq in 2003.

Powell, as secretary of state under president George W Bush, will forever be associated with his controversial presentation on February 5 2003 to the UN Security Council, making Bush’s case that Iraqi president Saddam Hussein constituted an imminent danger to the world because of its stockpiles of chemical and biological weapons. Powell admitted later that the presentation was rife with inaccuracies and twisted intelligence provided by others in the Bush administration and represented “a blot” that will “always be a part of my record”.

In a brief statement, the Powell family said he had died on Monday morning from Covid-19. Condolences poured in, including from Bush. “Many presidents relied on Gen Powell’s counsel and experience,” Bush wrote in a statement. “He was such a favourite of presidents that he earned the presidential medal of freedom — twice.”

US President Joe Biden said: “Colin embodied the highest ideals of both warrior and diplomat. He was committed to our nation’s strength and security above all. Having fought in wars, he understood better than anyone that military might alone was not enough to maintain our peace and prosperity.

“From his front-seat view of history, advising presidents and shaping our nation’s policies, Colin led with his personal commitment to democratic values that make our country strong. Time and again, he put country before self, before party, before all else — in uniform and out — and it earned him the universal respect of the American people.

“Having repeatedly broken racial barriers, blazing a trail for others to follow in federal government service, Colin was committed throughout his life to investing in the next generation of leadership,” said Biden.

Former president Barack Obama called Powell an exemplary soldier and patriot. “He was at the centre of some of the most consequential events of our lifetimes... And although he’d be the first to acknowledge that he didn't get every call right, his actions reflected what he believed was best for America and the people he served.

“Along the way, Gen Powell helped a generation of young people set their sights higher. He never denied the role that race played in his own life and in our society more broadly. But he also refused to accept that race would limit his dreams, and through his steady and principled leadership, helped pave the way for so many who would follow.”

Former US secretary of state Madeleine Albright said: “My heart is sad for I have lost a friend. Colin Powell was an American icon whose career in public service will always be celebrated and remembered, but to me he was simply my friend Colin.”

In 2008, Powell broke with his party to endorse Democrat Obama, the first black person elected to the White House. Illustrating his deep misgivings about the evolution of the Republican Party as it moved to the Right in recent years, Powell endorsed Democrats Hillary Clinton in the 2016 presidential election and Joe Biden last year against Donald Trump. Powell called Trump a liar who presented a danger to the US.

Former British prime minister Tony Blair recalled Powell’s self-deprecating humour, his kindness to his staff and his “willingness to work across partisan division in the interests of his country”.

“Colin was a towering figure in American military and political leadership over many years, someone of immense capability and integrity, a hugely likable and warm personality,” Blair said.

US secretary of state Antony Blinken said Powell’s career in the US military was legendary. “By the time he retired from the military he was arguably the most respected and celebrated American in uniform.”

Former president Bill Clinton said Powell lived the promise of America. “He spent his life working to help the country, especially our young people, live up to its own ideals and noblest aspirations at home and around the world.”

Condoleezza Rice, former secretary of state, said: “Today our nation mourns the passing of a truly great man. Colin Powell spent the entirety of his life in service to his country. He was a trusted colleague and dear friend through some very difficult times.”

Defense secretary Lloyd Austin remembered Powell as a mentor and friend.  “The world lost one of the greatest leaders that we have ever witnessed. Alma lost a great husband, and the family lost a tremendous father and I lost a tremendous personal friend and mentor. He has been my mentor for a number of years. He always made time for me and I could always go to him with tough issues. He always had great counsel.”

Jimmy Carter called him a true patriot and public servant. “We were honoured to work beside him to strengthen communities in the US, help resolve conflict in Haiti, and observe elections in Jamaica. His courage and integrity will be an inspiration for generations to come.”

Update: October 18 2021
This story has been updated with more reaction.

A decorated soldier, Powell died due to complications from Covid-19 while being treated at Walter Reed National Medical Center, his family said
World
7 months ago
Next Article