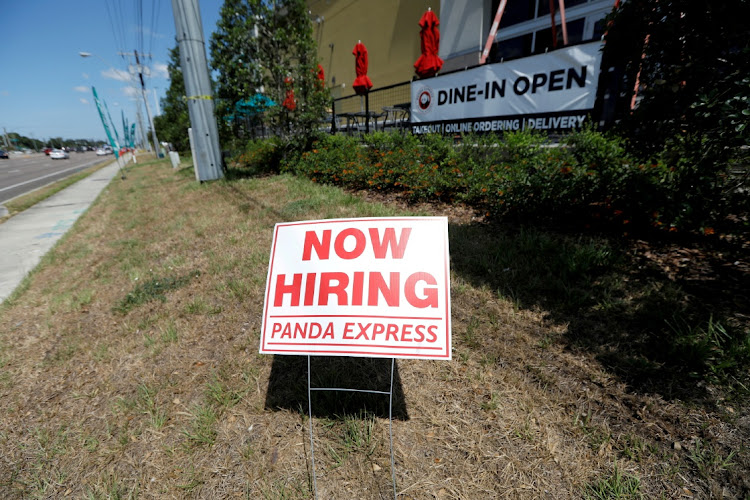 US job growth in September was the slowest this year, signalling a tempering of the labour market recovery and complicating a potential decision by the Federal Reserve to begin scaling back monetary support before year end.

The September increase was weaker than all but one estimate in a Bloomberg survey of economists. The median projection was for a 500,000 rise. US stocks fluctuated, Treasury yields rose and the dollar remained lower.

Consecutive months of sluggish job growth indicate a tug of war between employers — starved for workers to meet demand — and candidates who have been slow to return to the workforce. Nonetheless, school reopenings and the end of expanded federal unemployment benefits should lead to a pickup in hiring in coming months at a time when companies are boosting pay.

The labour force participation rate — a measure of the share of Americans who are employed or looking for work — fell by 0.1 percentage point to 61.6%.

In September, employment decreased by about 144,000 in local government education. The labour department said hiring last month was lower than typical, resulting in a decline after seasonal adjustment. Payrolls at restaurants and bars rose only slightly.

Chairperson Jerome Powell said after last month’s policy meeting that “a reasonably good employment report” for September would be needed to meet that test.

“Bottom line, I think the Fed would think it prudent to keep tapering on schedule and start the process next month,” said Roberto Perli, a partner at Cornerstone Macro and a former Fed economist. “But it will probably add caveats to the language to leave itself room to stop tapering if things get worse.”

Vaccine mandates, specifically in healthcare and education, put into place by employers and some states in recent weeks could also be contributing to churn in the labour market and adding to hiring challenges. The report showed employment in nursing and residential care dropped 37,600.

While health concerns about the Delta variant likely weighed on hiring in August and September, cases are dropping or poised to start falling in a majority of states, which could bring more Americans back to the labour force in coming months.

While payrolls at leisure and hospitality firms improved from August, job growth in the industry has slowed markedly from earlier in the year. Hiring firmed in construction, while payrolls rebounded in wholesale and retail trade.

A measure of the breadth of job gains across industries in September declined to a five-month low.

Meantime, average hourly earnings advanced 0.6% in September, the strongest monthly advance since April. The increase highlights how companies are trying to attract workers by offering higher wages. The average hourly workweek increased to a four-month high of 34.8 hours.

Women older than 20 left the workforce last month, and so did adult Black men, who saw their participation rate drop 0.7 percentage point to 66%.