Democrats and Republicans agree to suspend the limits until early December 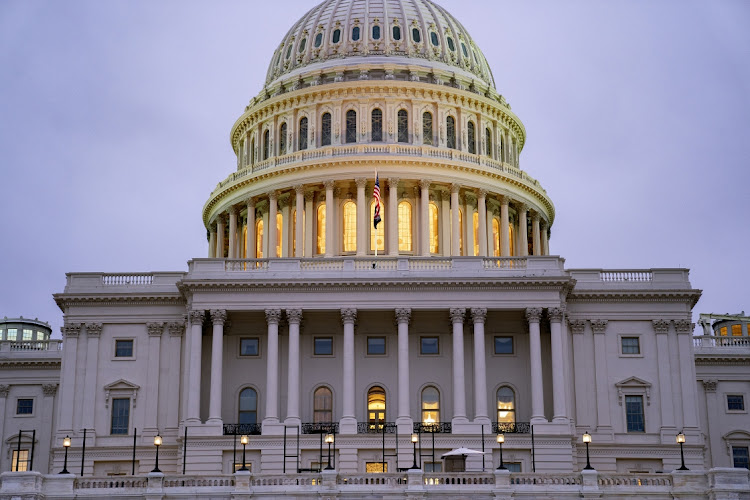 The US Capitol in Washington, DC, the US, October 7 2021. Picture: STFANI REYNOLDS/BLOOMBERG

Senate majority leader Chuck Schumer for Thursday night set up votes on a short-term debt ceiling increase  that would leave the battle to be rejoined less than two months from now, in the middle of an already packed congressional agenda.

Schumer and GOP counterpart Mitch McConnell struck a deal would raise the statutory debt ceiling by $480bn, according to a Senate aide. The amount would allow the Treasury to meet obligations through to December 3, the same day that the current stopgap government spending bill runs out.

Schumer set up a procedural vote and another for final passage after Republicans agreed to expedite the process. However, McConnell was still working on gathering enough Republican votes to move the debt ceiling bill forward.

The White House said in a statement that President Joe Biden looks forward to signing the bill once it is passed.

News of the deal early on Thursday added fuel to a rally in stocks. The S&P 500 Index headed for a third day of gains as the risk of an economically devastating tightening in fiscal policy receded for now.

McConnell was still working to get at least nine other Republicans to vote for Schumer’s procedural motion — called cloture — which needs 60 “yes” votes to advance the debt ceiling legislation to the floor. Democrats could then use their 50 votes plus a tie-breaker cast if necessary by Vice-President Kamala Harris to pass the bill.

North Dakota Republican Kevin Cramer said he would vote against cloture and against passing the legislation. He said McConnell had not yet rounded up the votes he needs.

“We’re having conversations with our members and kind of figuring out where people are,” Thune said. “In the end we’ll be there but it’s a painful birthing process.”

But Schumer’s scheduling of votes Thursday was a positive sign that the legislation was headed toward passage.

The bill would also have to be passed in the House, which like the Senate is scheduled to be out of session next week. However, House members could be called back to Washington on 72 hours notice.

The announced deal comes after weeks of partisan brinkmanship over how to raise the debt ceiling, which treasury secretary Janet Yellen has warned would be breached around October 18 without congressional action.

While the agreement averts an immediate crisis, it means the partisan battle over the debt will again be on the calendar just as Congress confronts the deadline to keep the government open, with regular fiscal-year funding running out. Democrats are also likely at that time to be trying to get an infrastructure bill and a massive tax and spending plan through the House and Senate, with their slim majorities.

That could be politically perilous for Democratic lawmakers still sharply divided over Biden’s $4-trillion worth of economic plans — particularly for moderates in swing states who worry about the overall cost.

By synchronising the next debt ceiling date and the shutdown cliff, Congress is more likely to address them both in a single piece of legislation. Such a bill could include a top-line spending level agreement for fiscal 2022 that addresses GOP demands for higher defense spending — thereby allowing full-year appropriations bills to be included.

McConnell first offered the deal on Wednesday and leaders negotiated the details into Thursday. On the Senate floor Thursday, he said Republicans still want to force Democrats to raise the debt ceiling in December using a process known as reconciliation, which would leave Republicans entirely removed from the process — and from any political fallout.

Schumer has rejected that idea, instead trying unsuccessfully to clear it with only Democratic votes on a swifter path. He had argued that there wasn’t enough time before the mid-October deadline. The process would take about two weeks, according to budget experts.

McConnell’s short-term debt-limit move was designed to call the Democrats’ bluff while showing Republicans were willing to be flexible, according to a person familiar with this thinking.

“Now there will be no question. They will have plenty of time,” McConnell said Thursday.

Another concern among McConnell and Republicans was that continuing the standoff might push Democrats to alter the filibuster rule, which gives the minority significant power to bottle up legislation. Democratic Senator Joe Manchin of West Virginia has repeatedly said he won’t jettison the filibuster, Republicans worried that a potential default would change his mind.

During discussions about the deal on Wednesday, Cramer said, some Republicans said “let’s not tempt fate and push Joe Manchin to wreck the Senate and end the filibuster”.