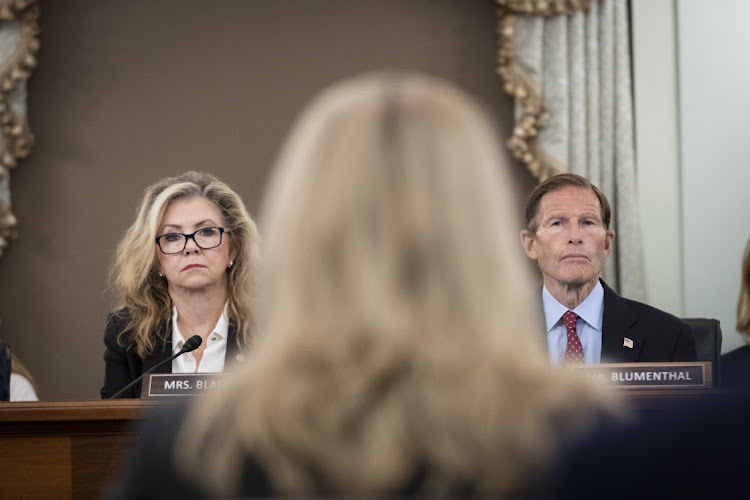 Senator Marsha Blackburn, a Republican, left, and senator Richard Blumenthal, a Democrat and chair of the Senate commerce subcommittee, listen to testimony from Frances Haugen, Facebook whistle-blower, in Washington, DC, the US, October 4 2021. Picture: DREW ANGERER/BLOOMBERG

Washington — US legislators pounded Facebook on Tuesday, accusing CEO Mark Zuckerberg of pushing for higher profits while being cavalier about user safety and they demanded that regulators investigate a whistle-blower’s accusations that the social media company harms children and stokes divisions.

Coming a day after Facebook and its units, including Instagram, suffered an outage, whistle-blower Frances Haugen testified in a congressional hearing that “for more than five hours Facebook wasn’t used to deepen divides, destabilise democracies and make young girls and women feel bad about their bodies”.

In an era when bipartisanship is rare on Capitol Hill, legislators on both sides of the aisle agreed on the need for big changes at Facebook.

In an opening statement to a Senate commerce subcommittee, chair Richard Blumenthal, a Democrat senator, said Facebook knew that its products were addictive, like cigarettes. “Tech now faces that big tobacco jaw-dropping moment of truth,” he said.

He called for Zuckerberg to testify before the committee, and for the Securities and Exchange Commission and Federal Trade Commission to investigate the company.

“Our children are the ones who are victims. Teens today looking in the mirror feel doubt and insecurity. Mark Zuckerberg ought to be looking at himself in the mirror,” Blumenthal said, adding that Zuckerberg instead was going sailing.

Haugen, a former product manager on Facebook’s civic misinformation team who has turned whistle-blower, said Facebook has sought to keep its operations confidential.

“Today, no regulator has a menu of solutions for how to fix Facebook, because Facebook didn’t want them to know enough about what’s causing the problems. Otherwise, there wouldn’t have been need for a whistle-blower,” she said.

The top Republican on the subcommittee, Marsha Blackburn, said that Facebook turned a blind eye to children below 13-year-olds on its sites. “It is clear that Facebook prioritises profit over the wellbeing of children and all users.”

Facebook spokesperson Kevin McAlister said in an email before the hearing that the company sees protecting its community as more important than maximising profits and said it was not accurate that leaked internal research demonstrated that Instagram was “toxic” for teenage girls.

Haugen revealed she was the one who provided documents used in a Wall Street Journal investigation and a Senate hearing on Instagram’s harm to teenage girls.

The Wall Street Journal’s stories showed the company contributed to increased polarisation online when it made changes to its content algorithm; failed to take steps to reduce vaccine hesitancy; and was aware that Instagram harmed the mental health of teenage girls.

Haugen said Facebook had also done too little to prevent its site from being used by people planning violence.

Facebook was used by people planning mass killings in Myanmar and the January 6 assault on the US Capitol by supporters of then-president Donald Trump who were determined to toss out the 2020 election results.

Part of the problem is the puffery of technology marketing, but AI scientists themselves may also be partly to blame
Opinion
2 weeks ago