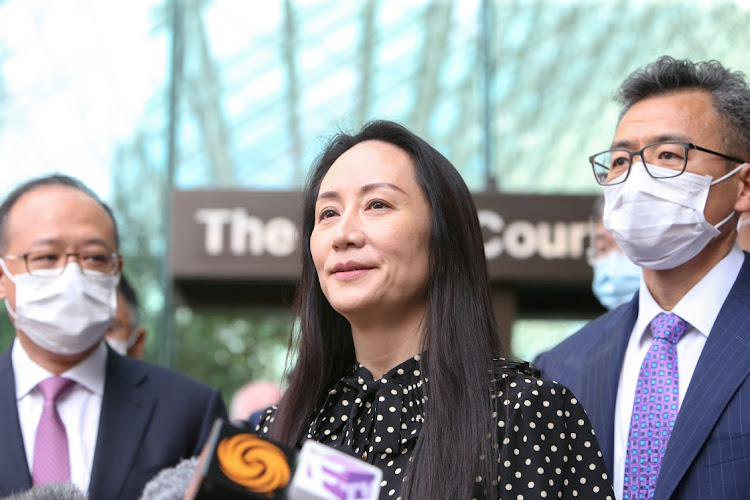 Huawei CFO Meng Wanzhou speaks to the media outside the Supreme Court in Vancouver, Canada, on September 24. Picture: REUTERS/JESSE WINTER

The admission by Huawei Technologies CFO Meng Wanzhou that she misled a bank about the company’s business dealings in Iran is unlikely to help the US as it continues to prosecute the company Huawei for the same charges.

While Meng’s admissions last week go to the heart of the financial fraud charges, legal experts say it will be difficult and perhaps impossible for prosecutors to use them against Huawei at trial.

And if the government were to try to use her admissions as leverage in any negotiations aimed at avoiding a trial, experts said, Huawei would probably say what she admitted was the result of extortion, or even a fabrication.

A spokesperson for the US attorney’s office in Brooklyn declined to comment, as did a Huawei spokesperson.

A US judge in Brooklyn on Friday accepted a deferred prosecution agreement between Meng and US prosecutors to end the case against her. Meng appeared via video from Canada, where she had been fighting extradition since her arrest in 2018 on a US warrant.

Her arrest was a key source of discord between Beijing and Washington, and also had repercussions for Canada. Within hours of the US agreement and Meng’s release, two Canadians who were detained shortly after Meng was taken into custody were freed from Chinese jails and flown home.

As part of the agreement, Meng acknowledged that Huawei controlled a company that operated in Iran, that its employees were Huawei employees, and that she had made false statements about the company at a 2013 meeting with an executive at a global bank, earlier reported as HSBC.

The statement of facts laid out in the agreement could be seen as an admission by a high-level officer of Huawei, said Roland Riopelle, a New York white-collar defence lawyer not involved in Meng’s case, “but if she is not available for cross-examination, it is almost certainly not admissible”.

Meng flew home to China on Friday and is unlikely to return to the US to help the government in its case against the company founded by her father, Ren Zhengfei.

In other cases, prosecutors typically call individuals such as Meng to the witness box to testify about their agreements with the government. But if Meng does not appear in court, Huawei cannot exercise its right to confront her as provided by the sixth amendment of the US constitution.

“If she does not come back, and no-one has the opportunity to cross-examine her, it is inadmissible,” said Charles Stillman, another New York defence lawyer.

The statement of facts identified Skycom Tech as a Hong Kong company that operated in Iran but was controlled by Huawei. It noted that Skycom was not a business partner, as Meng had claimed, and that Meng had falsely stated Huawei operated in compliance with applicable laws, regulations and sanctions.

Prosecutors said the deception by Meng and colleagues was intended to obtain banking services from global financial institutions in violation of US sanctions against Iran.

The statement of facts also could be raised by the US department of justice in talks with the company’s lawyers in an effort to avoid trial, experts said, even if it would not be allowed in as evidence.

Washington lawyer Juan Morillo, who often handles high-profile white-collar and cross-border cases, said it “gives them some additional leverage in negotiations with Huawei”.

But Morillo said the company could argue Meng’s agreement was also the “product of extortion” because she may have felt forced to sign it to gain her freedom. Ultimately, he said, the value would be minimal.

Huawei can also note that it did not sign the agreement and is not bound by it. In fact, a Chinese foreign ministry spokesperson on Saturday said “the so-called fraud charges against” Meng were “purely fabricated”.

“I’ve been in cases similar to this, and that’s what the strategy is going to be with Huawei,” said Morillo. “They’ll say, ‘This is a fabrication. This is the product of extortion and it has no binding effect on us at all’.”

Huawei faces wire fraud, bank fraud and conspiracy charges that included Meng. It also faces other charges, including for violating sanctions on Iran, obstructing justice, and conspiring to steal trade secrets from US technology companies. It has pleaded not guilty.