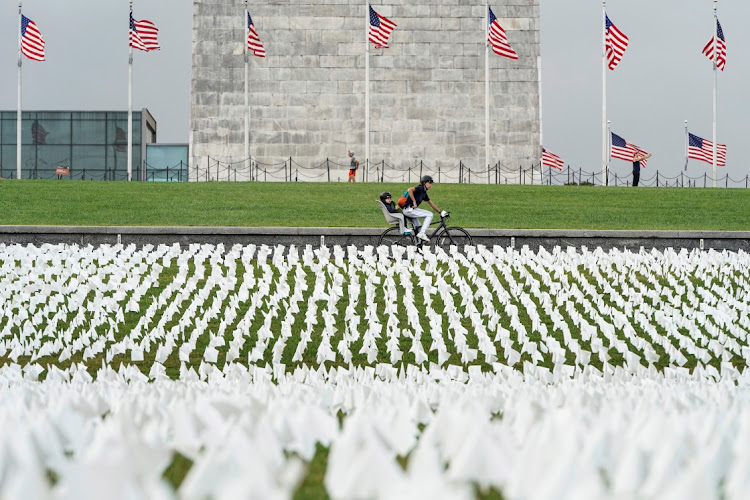 A cyclist rides past an exhibition of white flags representing Americans who have died of coronavirus. Pictures: JOSHUA ROBERTS

The US’s Covid-19 pandemic could surpass the number of dead in the 1918 influenza pandemic as soon as Monday, a milestone many experts say was avoidable after the arrival of vaccines.

The US has reported 673,768 deaths since the start of the pandemic, according to Johns Hopkins University data - just shy of the 675,000 that are estimated to have died a century earlier. The toll has increased by an average of 1,970 a day over the past week.

The deadly mark approaches despite the widespread availability of Covid-19 vaccines, which were developed in record time in a display of the extraordinary advances in medical science in the past century. The inoculations have been passed up by some 70-million eligible Americans, many of them encouraged by Republican politicians and conservative media.

“To have so many people who have died with modern medicine is distressing,” said Eric Topol, director of the Scripps Translational Research Institute, who noted there were no ventilators or vaccines in 1918. “The number we are at represents a number that is far worse than it should be in the US.”

The milestone also comes as the fast-spreading Delta variant has pushed the US into a dangerous new phase, upending hopes that the pandemic had passed and setting the stage for an uncertain winter.

Of course, the comparisons to the 1918 pandemic are highly imperfect. For starters, the US has about three times as many residents as it had a century ago, meaning the implied death rate is about a third as high.

The 1918 pandemic also targeted many young people, whereas Covid-19 has so far mostly killed those 65 and over, and the pandemics have played out at very different paces, according to John Barry, author of “The Great Influenza: The Story of the Deadliest Pandemic in History.” He said the 1918 pandemic did the majority of its damage during a 14- to 15-week stretch in the latter part of that year.

“That was much more intense, much more frightening,” Barry said of the earlier tragedy. But Barry said the stress from Covid-19 has been longer-lasting, “and the economic damage is light-years greater.”

There are other reasons why the numbers may not reflect significant differences. The 675,000 estimate from 1918-19 was based on extrapolations from spotty data. While imperfect in their own ways, Covid-19 statistics are probably better.

During extreme events such as pandemics, experts use so-called excess death studies as one way to estimate fatalities - essentially comparing the number of deaths in the outlier period with “normal” times. One excess death estimate from the US Centers for Disease Control and Prevention suggests there have been as many as 830,443 such fatalities during the Covid-19 pandemic, meaning the official numbers could be an undercount.

The unaccounted-for excess deaths may also reflect the price of disruptions in medical care and other indirect byproducts of the pandemic.

Vaccinations first rolled out in the US in December, and have been widely available for months. Since then, the vast majority of deaths have been among the unvaccinated.

“There is so much misinformation out there that some people cannot be convinced” of the benefits of vaccines, said Bertha Hidalgo, an epidemiologist at the University of Alabama. “Those are absolutely the deaths that can be prevented.”

Topol, the Scripps director, said the US has failed in other ways. Mask use has declined significantly, and most people are still using cloth masks, which have shown to be much less effective than surgical and N95 masks. He said there needs to be widespread distribution of medical-grade masks and rapid at-home Covid-19 tests that can help detect infections early on.

“Vaccines are a paramount part of the strategy, but we have failed on other measures as well,” Topol said. “We’re fighting this war with two hands behinds our back.”

Along with shortages of basic items come hefty price increases, which has fuelled fears of a wave of sustained inflation
World
1 month ago

Visits to US doctors are becoming a walk in the park