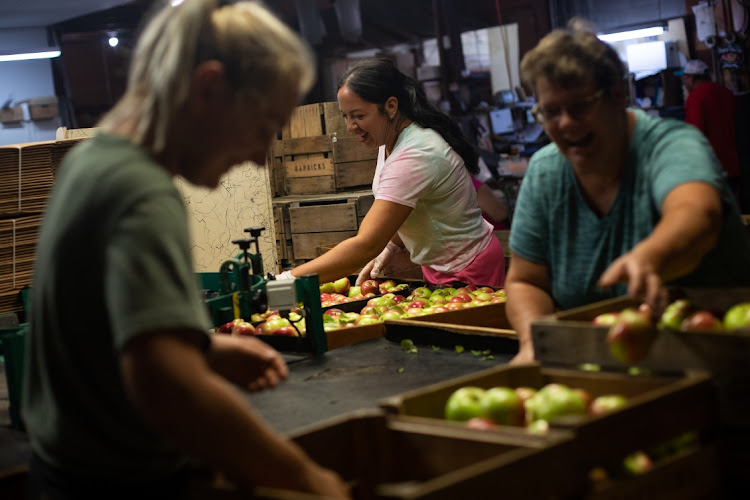 Workers sort apples at an orchard in Britton, Michigan, US, in this September 13 2021 file photo. Picture: BLOOMBERG/EMILY ELCONIN

The push for a $15 federal minimum wage may have stalled in Congress, but Covid-19 is helping steer the US ever closer towards a key objective of labour unions and their allies in the White House and on Capitol Hill.

An analysis of jobs posted from spring 2019 to spring 2021 from a sampling of cities shows many service-sector industries crossed above a $15 starting wage during the period, often by significant margins, according to Emsi Burning Glass, an analytics firm that tracks job postings to glean labour market insights.

The trend seems to have gathered steam in the recovery from the Covid recession, with several large employers, including Walmart, Target, Best Buy, and Chipotle Mexican Grill, bumping up starting or average hourly pay to $15 or more. Amazon.com recently announced it was boosting average starting wages for open logistics jobs to $18 an hour.

Ten states, plus DC, have passed laws that will incrementally raise their minimum wage to $15 over several years. Campaigning for the presidency, Joe Biden proposed raising the federal minimum wage, currently set at $7.25 per hour, to $15, but his administration would be hard-pressed to marshal enough votes in Congress — even among Democrats — to make that a reality.

That some companies are targeting $15 specifically suggests they are signalling that they are treating employees more fairly, which still represents something of a victory for the union-backed “Fight for $15” campaign, says Ben Zipperer, an economist at the left-leaning Economic Policy Institute (EPI).

In Los Altos, California, Smith.ai, a 330-person business that handles customer support for companies, recently raised its starting wage to $15 an hour, purposely choosing that rate in part because of all the attention on the issue. “I think people are looking at $15 as the new normal, kind of the new standard,” says co-founder Aaron Lee. “As we bump up to $15, we see a lot more applicants.”

The tight labour market has empowered workers to demand higher pay and improved conditions. The number of job vacancies exceeded new hires by 4.3-million in July, the most in data going back to 2000. Meanwhile, workers’ average hourly earnings climbed 0.6% in August, twice as much as forecast.

The tightness has sped up the rate at which Americans are hitting the $15 threshold, either because of supply-and-demand factors or state and local minimum-wage laws. The share of workers earning less than $15 an hour is dropping by about 1.5% a month so far this year, not adjusted for inflation, almost double the rate of the first seven months of 2019, according to Zipperer’s research. Today just under 20% of US workers still make below that level.

To be sure, a 5% rise in the consumer price index has chipped away at workers’ wage gains. Average hourly earnings adjusted for inflation are down 0.9% from August of last year.

Near Atlanta, John Culpepper keeps boosting the average wage at his Braselton, Georgia, staffing agency, which caters to the area’s big crop of distribution centres and manufacturers. It was $13.39 in the summer of 2020 and has since climbed 25%, to $16.80. Chalk it up in part to aggressive recruiting tactics by employers in the area. For instance, deep-discount retailer Ollie’s Bargain Outlet has taken to emailing its customers and offering $1,000 bonuses and jobs paying up to $20 an hour for warehouse work in nearby Commerce.

Employers that balk at the new pay rates are losing out, according to Culpepper, who owns four Express Employment Professionals offices in north Georgia. “A lot of them can’t do it, and so therefore they’re having labour shortages, which is affecting them getting product out the door,” he says.

Data from Emsi Burning Glass show a substantial portion of low-paying jobs in metropolitan areas went to $15 and above in the past two years. In Phoenix half of the employers seeking cooks at less than $15 an hour in spring 2019 had moved above that level by spring 2021. Two years ago the lowest wage advertised in job postings for cooks in Phoenix averaged $10.71 an hour, but that jumped 80%, to $19.24, two years later. In Philadelphia 88% of employers that offered less than $15 two years ago for labourers and material handlers had moved above that figure by 2021.

Then there is Chicago, where an ordinance took effect in July requiring employers with 21 or more employees to pay at least $15 an hour. The wage gains in some low-paying industries in the city have outstripped the new minimum, says Emsi Burning Glass chief economist Bledi Taska. For example, half of Chicago employers that offered less than $15 for personal-care aides two years ago were above that figure by spring 2021, with the average low wage in job postings climbing from $13.28 an hour to $17.78.

It is important to note that Emsi Burning Glass’s data come with some caveats. For starters, just 35% of job postings specify a wage or wage range. Also, the firm focuses only on large US metro areas, so its findings may not be representative of labour market dynamics in smaller locales. Still, Taska says a clear trend is visible from the millions of job announcements his firm analyses: “Even without a state mandate, the market is driving employers to go above that threshold.”

If it persists, the upward pressure on wages may wind up feeding into consumer price inflation, which is already trending higher because of a combination of supply bottlenecks and rising prices for a host of commodities. About half of small businesses reported raising prices since June, according to an August survey by the National Federation of Independent Business.

Greg Vojnovic, who owns Bojangles fast-food restaurants in northwest Georgia and Hot Dog Shoppes in Ohio, drives by billboards advertising $17-an-hour warehouse jobs and sees the effects on his ability to find workers. He’s already having “an extraordinarily hard time” hiring, and if the federal government adopts a $15 minimum wage, he says he would be forced to automate some functions. “You obviously couldn’t live on $15 an hour in New York,” Vojnovic says. But “the $15 minimum wage across the country just doesn’t make sense. The cost of living is just very different across the country.”

Progressive think-tanks and labour activists reject the idea that labour market dynamics may make the push for a higher federal minimum unnecessary, and they are pressing for even bigger gains. Zipperer’s think-tank, EPI, estimated in January that 32- million US workers would benefit from a $15 minimum wage by 2025 — two-thirds of them - because they will still be earning less than that and the remaining third because their pay may get a boost as employers rejigger their wage scales.

About 40% of the US workforce lives in states where the minimum wage is mandated to rise to $15 an hour, EPI estimates. “I don’t think it ends the conversation,” says Chris Figueredo, who oversees the Ballot Initiative Strategy Center, a nonprofit that pushes for progressive state ballot measures. “The fight for $15 is the floor. It’s not the ceiling.”

Newsom turned the special election into a referendum on his main Republican rival, Larry Elder, a Trump supporter
World
2 months ago

Brexit and Covid-19 have left gaps in the workforce, giving job-seekers more leverage
World
2 months ago