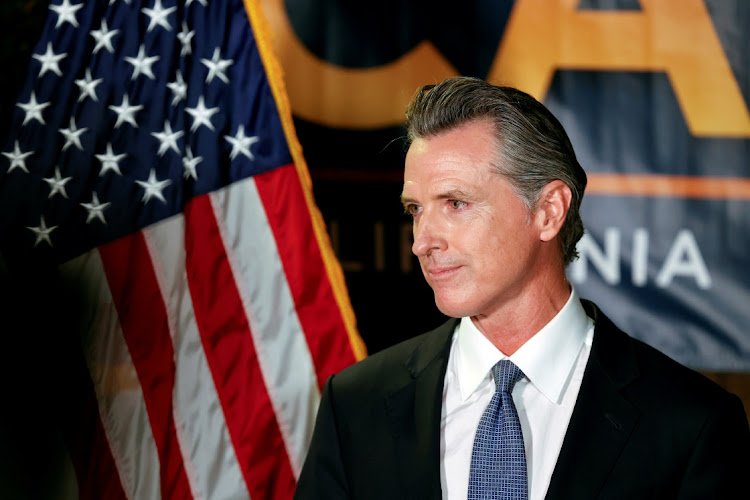 California governor Gavin Newsom makes an appearance after the polls close on the recall election, at the California Democratic Party headquarters in Sacramento, California, the US, September 14 2021. Picture: REUTERS/FRED GREAVES

California governor Gavin Newsom’s big win in Tuesday’s recall puts him on course to keep his seat in 2022’s scheduled election, after surviving a test of confidence over his handling of the pandemic and economic recovery.

Newsom avoided becoming only the second governor in California history to be recalled from office thanks to support from the Democratic party’s traditional base.

About 5.8-million Californians — 63.9% of voters — chose to let him stay in the special election, according to the secretary of state’s unofficial results as of early Wednesday. Newsom captured 62% of the vote when he was first elected in 2018.

Newsom will need to prioritise issues such as the safe reopening of schools and an expansion of housing for the middle class, said Davis, who lost the state’s first gubernatorial recall vote in 2003 to Republican Arnold Schwarzenegger, in an interview on Bloomberg Television.

The governor’s clear victory in the recall makes it less likely he’ll face a high-profile Democratic rival in next year’s primary and it boosts his chances of a decisive re-election in the general vote in November 2022.

“He’ll be in an even stronger position and really sort of unbeatable,” said Katie Merrill, a Democratic strategist who worked on deputy-governor Eleni Kounalakis’s 2018 campaign.

In remarks after polls closed on Tuesday, the governor called for unity, urging Californians to reject the “false separateness” that emerged during the recall campaign. “We have so much more in common as a state and nation than we give ourselves credit for,” Newsom said at the Democratic Party’s headquarters in Sacramento.

Newsom needed more than 50% of voters’ support to keep his job. Had he been recalled, the roughly 46 rivals running to replace him only had to get the most votes to win. Opponent Larry Elder, a conservative talk show host who supports former president Donald Trump, received 46.9% of the vote. The next most-popular candidate, YouTube personality and Democrat Kevin Paffrath, got 9.8%.

Newsom had turned the special election into a referendum on his main Republican rival, Elder.

Elder’s entry into the race two months ago helped crystallise opposition to the recall. His controversial views like eradicating the minimum wage and allowing employers to ask women whether they planned to have children were unpalatable to the majority of Californians, said Dan Schnur, a former spokesperson for Republican governor Pete Wilson who now teaches political communication at several California universities.

“Newsom didn’t win this election by talking about himself and his own accomplishments,” Schnur said. “He won by warning voters about the potential alternative.”

The 53-year-old former San Francisco mayor was the first governor to call for a statewide lockdown at the start of the pandemic. Initially his approval ratings were among the highest in state history. As the crisis wore on, however, Newsom’s appeal faded and opponents gathered more than the 1.5-million signatures required to trigger a recall election. The overwhelming majority of gubernatorial recall efforts fail, but Newsom’s aggressive pandemic-related business and school closures and his attendance without a mask at a luxury dinner party with lobbyists ignited the grass roots attempt to remove him.

Some Republicans already have signalled their intent to run for governor next year.

Elder suggested in his concession speech on Tuesday that he would challenge the governor a second time. “We may have lost the battle but we are going to win the war,” Elder said.

Anything can happen over the next year, as the Delta variant fuels the spread of Covid-19 and forest fires threaten the Golden State. Even though the governor has the luxury of a budget surplus, he’ll have to be mindful of the wave of dissatisfaction that led to the recall effort.

“The governor is a political animal,” said Mindy Romero, director of the Center for Inclusive Democracy in Sacramento. “He has to think abut the political consequences.”

So far, the governor has raised close to $4.5m for his 2022 run from donors, including Walt Disney, Amazon.com, and film director Steven Spielberg.

His supporters raised more than $70m to fend off the recall, but he won’t be able to use those unspent funds for next year’s fight. State campaign finance rules bar a ballot measure committee — which is how state regulators view the recall election campaigns — from transferring money to a candidate committee, said Jessica Levinson, an elections law professor at Loyola Law School in Los Angeles.

Once debts and other expenses are paid off, the campaign could donate the remainder to charity, give it to a political party committee, or refund it to donors, though the latter scenario rarely happens, she said. Even though those funds can’t be used for the next election, it’s an opportunity to curry favour with political organisations and committees aligned with the Democratic party, Levinson said.

“That’s a big bag of cash to be able to swing around,” she said.

Politicians aren’t averse to using wars to distract voters from domestic issues. Now, the US president could use a pressing matter at home to divert ...
Opinion
4 days ago

The package, estimated to raise more than $2-trillion, is slimmed down to appeal to business-minded Democrats
World
5 days ago
Next Article