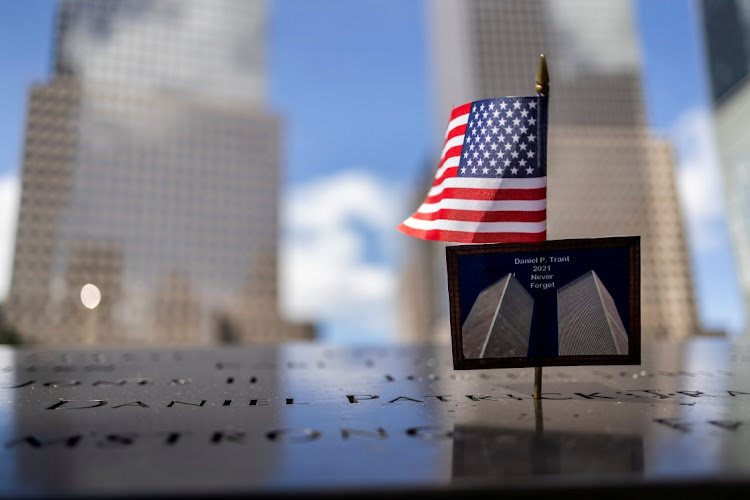 A postcard of the Twin Towers at the 9/11 Memorial on the 20th anniversary of the September 11 attacks in Manhattan, New York City, the US. Picture: REUTERS/CARLOS BARRIA

The Federal Bureau of Investigation (FBI) declassified a secret internal memo on its investigation into allegations that Saudi Arabia’s government provided assistance to the terrorists that carried out the September 11 attacks on the US.

The 16-page, partially redacted memo doesn’t draw any conclusion on the allegations, though it details links and contacts between the terrorists and Saudi nationals living in the US at the time, including one of the country’s diplomats.

The memo relates to contacts in the US by Saudi-born Nawaf al Hazmi and Khalid al Mihdhar, who were among the hijackers that crashed a passenger jet into the Pentagon.

The FBI’s release coincided with this weekend’s commemorations of the 20th anniversary of the attacks. It is the first document to be disclosed since US President Joe Biden this month ordered the declassification of materials that have remained out of public view. Documents will be released to the public over the next six months.

Saudi Arabia’s government has consistently denied having any role in the attacks.

In a statement, 9/11 Families United, a group representing families of victims of the attack, said the 2016 memo “puts to bed any doubts about Saudi complicity in the attacks”.

It implicates “numerous Saudi government officials, in a co-ordinated effort to mobilise an essential support network for the first arriving 9/11 hijackers”, the group added.

The families have long pressed for the FBI’s files to be declassified and publicly released. Some of the families believe that the FBI suppressed or even destroyed evidence pointing to a more substantial connection between the terrorists who perpetrated the attacks, most of whom were Saudi Arabian, and the Saudi government.

In a statement released on September 8, Saudi Arabia’s embassy in Washington said it supports full declassification of any documents and materials relating to the US investigation of the terrorist attacks and called charges that the nation was complicit in the strikes “categorically false.”

Twenty years on and 9/11’s children carry the dreams of those who died, with their own

They are making their way, moving up, looking forward — and, at the same time, always looking back
World
1 week ago

Despite the public’s rejection of ‘forever wars’, the US will need to maintain military pressure on radical networks
World
1 week ago

In 2001 a deeply wounded US responded to the horrific 9/11 attacks with the invasion of Afghanistan and, later, Iraq. A campaign that may have ...
Features
1 week ago
Next Article