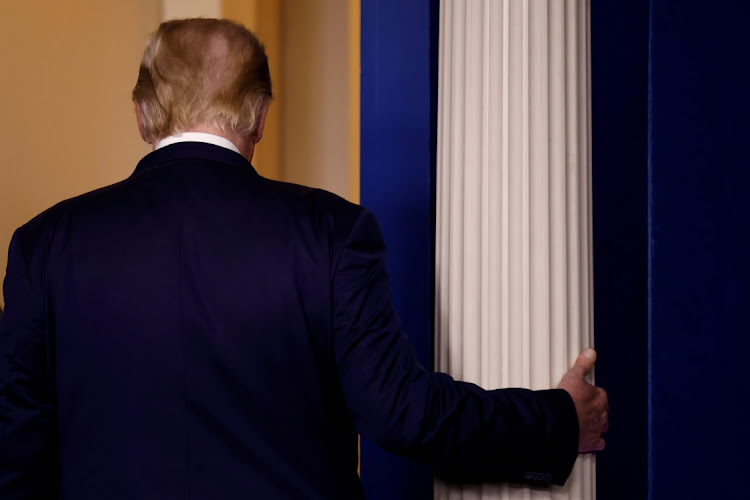 US President Donald Trump departs after speaking about the 2020 U.S. presidential election results in the Brady Press Briefing Room at the White House in Washington on November 5 2020. Picture: REUTERS/CARLOS BARRIA

Former US president Donald Trump frequently hints at another presidential bid, without actually announcing, a strategy that leaves him with access to a $102m war chest — an unrivalled haul that could scare off donors to other candidates and freeze the Republican 2024 race.

By not formally declaring, Trump is free to use money from his political action committees (PACs) to act very much like a candidate without the restrictions that come with an announcement. His coyness keeps the focus on him and maintains his fundraising advantage over would-be rivals.

While he has spent a tiny fraction of that money on rallies and is planning travel to early voting states such as Iowa, he has reported donating to very few of the Republican congressional candidates he has endorsed. Instead, the nine-digit bank account serves as a warning to would-be challengers of what they would have to raise to beat him.

Even if his Save America political action committee. which holds most of the funds, gave to a Republican candidate in every Senate and House race in 2022, it would still have more than $85m.

“His leadership PAC is a really powerful weapon that’s heavily armed right now but it’s not clear what he’s going to use it for,” said Larry Noble, a former general counsel at the Federal Election Commission.

Formally declaring a run would put that PAC money essentially off limits and trigger tighter rules and reporting requirements. An announced presidential candidate must register with the Federal Election Commission within 15 days of raising or spending $5,000 on his or her campaign.

“Making a formal announcement of his intentions to run as a candidate turns him from a US citizen into a highly regulated individual,” said Craig Engle, leader of Arent Fox’s political law practice.

In one of the clearest signs that he’s interested in running again, he has begun to hire operatives familiar with campaigning in Iowa. And on Tuesday night he announced that he would hold a rally in Des Moines on October 9.

Yet when pressed on his plans, Trump demurs, saying he isn’t “allowed” to answer but that his supporters will be “very happy” with his decision.

“Because the campaign finance laws are extremely complicated and unbelievably stupid, I’m actually not allowed to answer that question,” Trump told Fox News on August 17 when asked about a 2024 bid. “People, you’re going to be happy because I love this country and I hate to see what’s happening to it.”

Since it was created shortly after the 2020 election, Trump’s Save America PAC has raised more than $94m, but had spent about $4m by June 30.

Once he’s a candidate, Save America and his other leadership PAC, Make America Great Again, would be limited to giving his campaign $5,000 per election. Unable to use the PACs’ millions to pay its expenses, a new Trump presidential campaign would have to start raising money from scratch.

The same fundraising limits apply to other potential candidates, including rival Republicans as well as Biden and Vice-President Kamala Harris. Biden doesn’t have a similar leadership PAC but has $13.8m left over in his joint fundraising committee and $4.7m in his campaign committee, all of which he would be able to use for a re-election effort. Harris is expected to run for president only if Biden doesn’t seek a second term.

For Republicans, Trump’s sizeable war chest could shut down fundraising if donors feel their contribution to a rival can’t chip away at his advantage, making it a significant threat to anyone who steps into the race.

Trump has endorsed candidates in 2022 midterm election races, especially challengers to House incumbents who voted to impeach or convict him for his role in the January 6 attack on the US Capitol. But his PACs reported no contributions to candidates at June 30, when the last the last FEC reporting period ended.

Since then, both Representative Mo Brooks, his endorsed candidate for the US Senate in Alabama, and Max Miller, a congressional candidate in Ohio, said they had received donations from him.

Taylor Budowich, a spokesperson for Trump and his Save America PAC, said the former president is focused on using his PAC to help Republicans retake control of the House and Senate in 2022.

“President Trump is mobilising his MAGA political movement, the most influential force in politics, behind candidates and causes that will advance his America First agenda,” Budowich said in a statement.

At the same time, other would-be 2024 Republican contenders are running “shadow campaigns”, travelling to Iowa and other early voting states to stump for candidates in 2022 but not hiring staff or raising money with an exploratory committee, said Doug Heye, a former Republican National Committee communications director and Trump critic.

“They know the first person to do so would be target number 1 for Trump,” Heye said. “The will he/won’t he game keeps Trump’s name front and centre.”

‘We don't know how quickly or openly the court will reverse Roe [v Wade], but this decision suggests that it’s only a matter of time,’ abortion ...
World
2 weeks ago

In their first meeting, the leaders also discuss energy and Ukraine's future after chaotic withdrawal from Afghanistan
World
3 weeks ago
Next Article