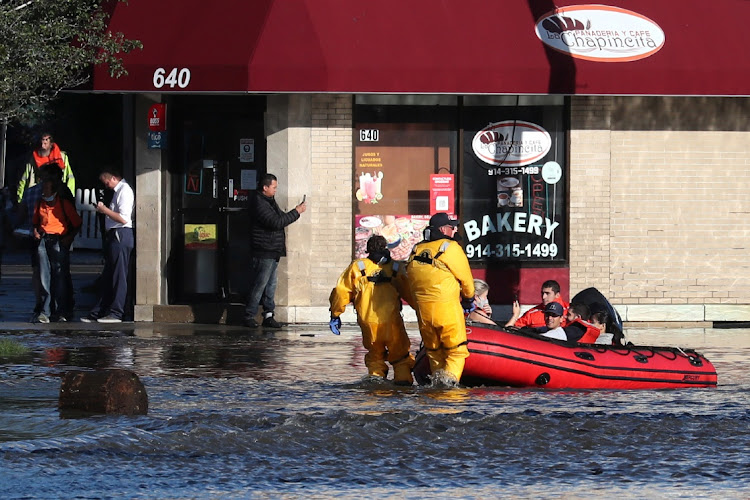 Recovery efforts were under way early on Thursday to bring back transportation systems serving millions of residents in the densely populated metropolitan area.

New York governor Kathy Hochul urged commuters to stay home from work and pleaded for patience to “give us some time to have complete restoration of the trains” after service was knocked out in much of the area, leaving many riders stranded overnight.

“This is one for the record books,” Hochul told CNN.

The storm dumped “extreme rain rates” of 5cm-7.6cm per hour along the Philadelphia to New York City corridor, the National Weather Service said.

The Long Island Railroad, which is also run by the MTA, said early on Thursday that services on most of its branches has been restored, but commuters should expect systemwide delays of up to 30 minutes.

At least 12 others were killed in New Jersey and Pennsylvania, according to officials and local news outlets. Tornadoes hit Maryland and New Jersey.

In Somerset County, New Jersey, the bodies of four people were recovered, according to Frank Roman, deputy chief of the county prosecutor’s office. Two victims were found in cars in Hillsborough, and two others were in Bridgewater, where they had exited their flooding vehicle and were swept away, Roman said in an interview.

Lora said the body of a man in his seventies was retrieved from floodwaters. The vehicle the man was riding in was swept away by the water and firefighters were swept under the vehicle, preventing them reaching him, CNN reported.

The governors of New York and New Jersey declared a state of emergency late on Wednesday.

All non-emergency vehicles were banned from New York City’s streets until 5am on Thursday due to the weather, city authorities said on Twitter.

At least five flash flood emergencies were issued on Wednesday evening by the National Weather Service, stretching from west of Philadelphia through northern New Jersey.

All New Jersey Transit rail services apart from the Atlantic City Rail Line were suspended, the service said on its website.

Tornadoes spawned by the storm ripped through parts of Pennsylvania and New Jersey, images on social media showed.

New Jersey’s Newark Liberty Airport said on Twitter it was experiencing “severe flooding”. It said it resumed “limited flight operations” close to midnight after all flight activity was suspended late on Wednesday.

More than 200,000 electricity customers were without power early on Thursday in five northeastern states that got most of the rains overnight, mostly in Pennsylvania and New Jersey, according to PowerOutage.US, which gathers data from utility companies. There were also outages in New York, Connecticut and Massachusetts, it said.

Update: September 2 2021
This story has been updated with new death toll.

Ida, the first major hurricane to strike the US this year, weakens after making landfall, but could still trigger heavy flooding
World
2 weeks ago