In their first meeting, the leaders also discuss energy and Ukraine's future after chaotic withdrawal from Afghanistan 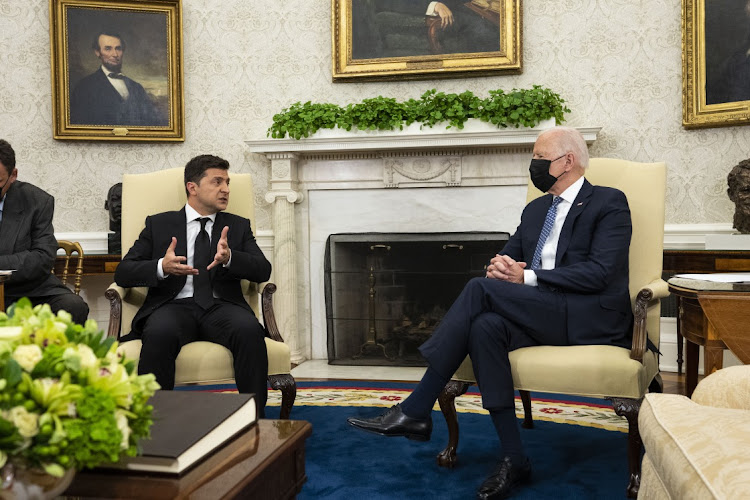 US President Joe Biden and Ukraine's President Volodymyr Zelenskiy, left, meet in the Oval Office of the White House in Washington, DC, the US, September 1 2021. Picture: DOUG MILLS/NEW YORK TIMES/BLOOMBERG

President Joe Biden sought to reassure Ukrainian President Volodymyr Zelenskiy that the US would counter Russian hostility towards his country as the leaders met for the first time on Wednesday at the White House.

Biden told Zelenskiy that the US “remains firmly committed to Ukraine’s sovereignty and territorial integrity in the face of Russian aggression”.

Zelenskiy thanked Biden for US donations of coronavirus vaccines and a new, $60m package of security aid, but said he would press the US president on Ukraine’s aspirations to join the defence alliance Nato.

Ukraine already participates in many Nato missions, including the evacuation of Afghanistan in August, but its admission to the alliance would be regarded in Moscow as a provocation.

Zelenskiy has had a complicated relationship with the US. A phone call with former president Donald Trump became central to Trump’s first impeachment after a whistle-blower complained that he held up military aid to pressure Zelenskiy to investigate Biden’s son. Trump defended the call as “perfect”.

Andriy Yermak, a Zelenskiy aid whose conversations with Trump’s then-lawyer, Rudy Giuliani, also factored in the impeachment investigation, accompanied the Ukrainian president to his meeting with Biden.

The meeting with Biden comes amid tensions over Nord Stream 2 after the US all but abandoned its years-long campaign to halt the construction of the undersea pipeline that would transport natural gas from Russia to Germany, bypassing Ukraine. Zelenskiy called the project Biden’s “loss”.

Zelenskiy is seeking more clarity on how Western allies will ensure the former Soviet state’s security, especially as its current gas deal with Russia expires in 2024 and Nord Stream 2 threatens its vital revenue as a transit country. His concern is that Ukraine could suffer if Biden makes concessions to win co-operation from Russian President Vladimir Putin on issues such as nuclear non-proliferation and China.

Zelenskiy told Biden that energy security is “important not only for Ukraine but for all of Europe because of commencing of Nord Stream 2”.

Already in 2021, the US has committed to spending $400m on security assistance for the country. Biden also plans to send an additional $12.8m in Covid-19-related aid.

Zelenskiy arrived in Washington on Monday and on Tuesday met with defence secretary Lloyd Austin and other cabinet officials to discuss energy, climate and security issues, according to the Biden administration. Austin signed a defence framework with Ukraine designed to help the country counter Russian aggression and expand co-operation over sharing intelligence and other matters.

Wednesday’s talks between Biden and Zelenskiy is their first in-person person meeting, though the two presidents spoke by phone in April and June.

Zelenskiy has said he wanted the US to be more involved in peace talks to end the seven-year military conflict in Ukraine’s Donbas region with pro-Russian separatists.

Biden helped ease tensions earlier in 2021 in a summit with Putin after Russia had stationed tens of thousands of troops on the Ukrainian border, saying they were military drills. But the situation has deteriorated in Donbas since March, and Russia plans more drills together with Belarus — which borders Ukraine on the north — later in September.

Biden visited Kiev several times as vice-president and was deeply involved in the nation’s reform efforts, fuelling hopes in Kiev that his administration would take an aggressive stance towards defending Ukraine’s sovereignty.

The US already supplies Ukraine with military hardware to help it fight Kremlin-backed forces in the conflict in its easternmost regions. Zelenskiy plans to discuss additional naval assistance with the US — which has provided some patrol boats — after the country lost several ships after Russia’s annexation of the Crimean Peninsula.

Zelenskiy has sought entry into Nato’s membership action plan, saying it is the only viable way to have protection from Russia. Biden said in June that Ukraine had to crack down further on corruption and meet other unspecified criteria before it can be considered for Nato membership.