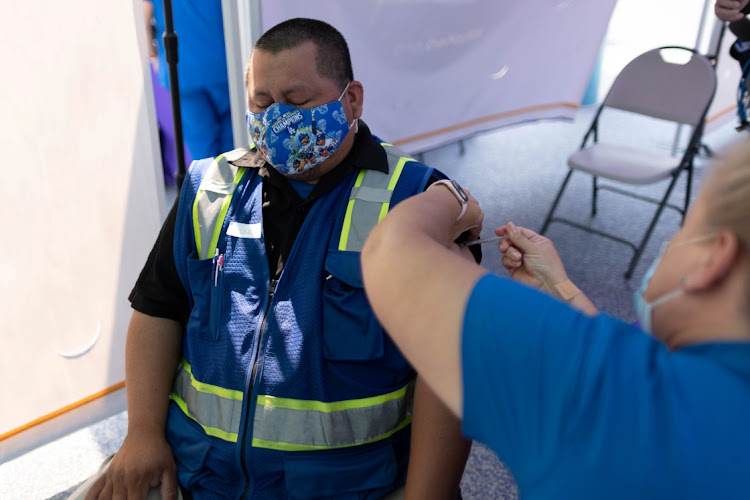 Theodoro Valencia receives a shot at a clinic in Los Angeles, California, the US, August 17 2021. Picture: REUTERS/LUCY NICHOLSON

The Biden administration will start offering booster shots on September 20 to all vaccinated US adults,  in a huge  expansion to a programme previously limited to those with weakened immune systems — as the coronavirus Delta variant continues its nationwide spread.

In a joint statement on Wednesday, the top US public health officials said a third dose of Pfizer  and Moderna shots “will be needed to maximise vaccine-induced protection and prolong its durability”. Healthcare workers and elderly people who got their shots at the beginning of the year will become eligible for the boosters first.

“Based on our latest assessment, the current protection against severe disease, hospitalisation, and death could diminish in the months ahead, especially among those who are at higher risk or were vaccinated during the earlier phases of the vaccination rollout,” according to the statement citing health officials including Centers for Disease Control and Prevention (CDC) director Rochelle Walensky, Food and Drug Administration (FDA) acting commissioner Janet Woodcock, surgeon-general Vivek Murthy, and infectious disease expert Anthony Fauci.

The US will begin issuing more booster shots in the week of September 20 to fully vaccinated people 18 years and older who received their second shot at least eight months earlier, Murthy said in a press conference on Wednesday. The plan, which does not include vaccinated people between the ages of 12 and 17, is still subject to an independent evaluation and clearance by the FDA.

Health officials are still studying a possible booster for the about 14-million Americans who received the Johnson & Johnson (J&J) single-dose vaccine, which didn’t use the same mRNA technology as Pfizer and Moderna. But the officials said they anticipate boosters for the J&J shot “likely will be needed”.

The US is facing a new wave of Covid-19 infection, primarily among the unvaccinated and driven by the Delta variant, which has fuelled concern over breakthrough infections. Deaths have been rising again, too, including 1,002 recorded on Tuesday.

Still, the medical community remains divided over the efficacy of widespread booster shots, though studies continue to roll in on breakthrough infections and whether vaccine efficacy wanes over time, in particular for older or more vulnerable people.

The CDC published three studies showing that mRNA vaccines continue to provide strong protection against hospitalisation from the coronavirus, even as efficacy at preventing infections has waned somewhat in the face of the highly infectious Delta variant.

In one study, published in CDC’s Morbidity and Mortality Weekly Report on Wednesday, researchers found that the vaccines remained 95% effective at preventing hospitalisation in New York at the end of July, after Delta had taken over, compared to the same rate of effectiveness against hospitalisation in early May.

A second study, published in the same journal, found the vaccine’s ability to prevent hospitalisations held up well from March through July, with no statistical lowering of efficacy in the second half of the period compared to the first. There was also no statistically meaningful drop-off in efficacy in preventing hospitalisations in the elderly, those with multiple chronic medical conditions, or other subgroups of patients, the real-world study found.

In a third report, researchers found that vaccine efficacy in preventing infections in nursing homes dropped from 74.7% before Delta took over in the spring to 53.1% after Delta became predominant in June and July. The study could not distinguish between symptomatic and asymptomatic infections. But the authors concluded that “additional doses might be considered” in nursing home residents.

Nearly 170-million people in the US have been fully vaccinated, though only some would become eligible in the next few months for a booster.

Officials said they have enough supply to continue donations and exports to other nations still struggling to procure vaccines. Still they’ve faced criticism for stoking inequities by handing out third shots while vast majorities of people in many countries haven’t had their first.

The World Health Organization (WHO) has called for a moratorium on booster shots through September to enable poorer countries to catch up on vaccination rates. A spokesperson for vaccine alliance Gavi, which co-leads the Covax sharing programme, said that rich countries giving boosters will only worsen inequities and called on countries to share all excess doses with Covax.

“The divide between the haves and have-nots will only grow larger if manufacturers and leaders prioritise booster shots over supply to low- and middle-income countries,” WHO director-general Tedros Adhanom Ghebreyesus said in a press briefing in Geneva.

Tedros pressed for J&J, which is manufacturing some vaccines in Africa, to distribute doses there before sending them to Western countries that have already inoculated large portions of their populations.

The move on Wednesday marks a huge expansion of the US’s vaccine plan, which had so far only included boosters for people with compromised immune systems.

The CDC said separately that it will launch a new outbreak analysis and forecast centre, picking a group of outsiders from academia and the private sector to lead the new initiative.

The 35-50 age group has turned out to be a vaccine-shy bunch, says ‘worried’ health department
National
9 months ago

Moderna’s valuation reflects expectations for big growth, in this case coming from two main drivers: continued sales of its Covid-19 vaccine and ...
Opinion
9 months ago
Next Article