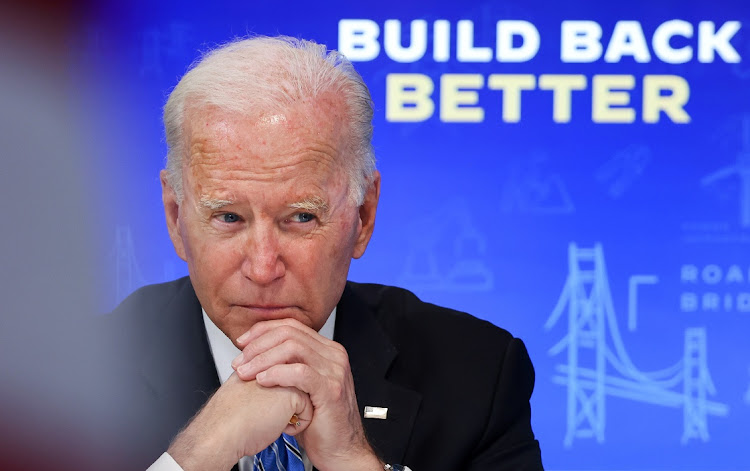 Donald Trump made the politically popular pledge to bring US troops home from the nation’s longest war. Now US President Joe Biden is delivering on the promise — and reaping growing criticism over the grim results that are unfolding in Afghanistan.

The US-trained Afghan military is shrinking as Taliban insurgents seize provincial capitals and reimpose their fundamentalist views. As they take towns and commandeer security checkpoints, waves of desperate people are fleeing. The situation is an especially difficult challenge for Biden, who has committed to champion human rights and democratic values.

Some of Biden’s fellow Democrats are expressing particular alarm that the Taliban’s rapid advance is already bringing a return to the attacks on women and other human rights violations familiar from its earlier rule of the country.

“We need to think about everything we can do that might have some influence,” Senator Jeanne Shaheen of New Hampshire said in an interview. “Maybe it doesn’t all work but we’ve got to keep at it. We can’t allow wholesale massacres of any woman who’s in the workplace in Afghanistan, or any woman who has an education, or allow them to kick all of the girls out of school and go back to, really, the days of cave people in the way they treat women and girls.”

Alarm has grown as some military experts predict that Kabul, the Afghan capital, may fall within 30 to 90 days. Some lawmakers are taking that prediction with a pinch of salt, according to a congressional aide, though they say that the Taliban may be able to seize the heavily fortified city in six months to a year.

“This is a handover to the Taliban,” Ryan Crocker, who served as ambassador to Afghanistan during the Obama administration, said in an interview on Wednesday on Bloomberg TV. The Afghan government, he said, now perceives “rightly that we have hung them out to dry. We did a deal with their enemy.”

Biden’s aides and Pentagon officials say it’s too early to proclaim the Taliban victorious. “We are closely watching the deteriorating conditions in parts of the country,” White House spokesperson Jen Psaki said on Wednesday, but “no particular outcome, in our view, is inevitable.”

They’ve also made it clear it’s up to the Afghans now.

“They’ve got to fight for themselves, fight for their nation,” Biden told reporters on Tuesday, and Pentagon spokesperson John Kirby reaffirmed that “the commander-in-chief has given us a new mission, and that mission is to draw down by the end of this month.”

Former president Trump made the call to bring American troops home a central part of his America First foreign policy. It’s proved popular, at least until now. An Economist/YouGov poll taken in July found 57% of Americans favoured withdrawing troops from Afghanistan, while just 20% opposed it.

The drawdown moved forward despite warnings from various figures — from former Democratic secretary of state Hillary Clinton to Republican senate minority leader Mitch McConnell — that a withdrawal could return Afghanistan to Taliban control, which ruled until US forces invaded in 2001 in the name of defeating the Al-Qaeda terrorists behind the Sept. 11 attacks.

Critics say the deteriorating situation raises questions of US leadership and credibility, even as the Biden administration tells allies that “America is back”, working with allies for common goals.

“The world is definitely watching US actions in Afghanistan to see whether the US is a reliable partner,” said Scott Worden, director of Asian and Central Asia Programmes at the US Institute of Peace. “While the short-term consequences in Afghanistan may be manageable in terms of the core goal of blocking Al-Qaeda from future attacks on the US, there are longer-term strategic consequences that could come from global doubts about American commitments to its partners.”

David Sedney, a former deputy assistant secretary of defence for Afghanistan, Pakistan and Central Asia under former president Barack Obama, put it even more bluntly: “The lesson here is that nobody should trust the United States, whether it’s Ukraine or Vietnam or Taiwan or any country.”

Russia has criticised the “hasty withdrawal” of US and allied forces, and increased its troops at the Tajikistan-Afghanistan border. The deteriorating situation is also giving China talking points.

“The US, in disregard of its responsibilities and obligations, hastily withdrew from Afghanistan, leaving a mess and turmoil to the Afghan people and regional countries,” Chinese foreign ministry spokesperson Wang Wenbin said last month. “This further exposed the hypocritical face of the US under the cover of ‘defending democracy and human rights’.”

Biden said on Tuesday that the US will continue “providing close air support” to the Afghan military.

The administration is debating whether to reverse an earlier decision to scale back that air support after the Aug. 31 troop withdrawal, according to a person who asked not to be identified discussing internal deliberations.

But the value of such “over the horizon” attacks from distant bases in the Middle East is limited, and without trusted spotters on the ground the toll of civilian casualties is likely to climb.

“You need to have a maintenance counterterrorism policy,” said Richard Fontaine, CEO of the Centre for a New American Security who was an adviser to the late Republican senator John McCain. To focus on big, strategic challenges such as China and Russia, “you need policies which manage acute threats that could distract from those overarching goals”.

The administration has indicated it would take action if the Taliban again gives shelter to terrorist groups such as Al-Qaeda despite Taliban promises not to do so in a now-tattered peace accord that the Trump administration negotiated with the group.

A former Trump administration official, who asked not to be identified describing internal policy positions, said Trump wouldn’t have completed the drawdown of American troops until the Taliban and the Afghan government reached their own agreement, as anticipated in the US-Taliban deal. The official blamed Afghan President Ashraf Ghani for the failure of those talks. Ghani has become an increasingly isolated figure, dismissing peace talks as dead, seeking support from his country’s warlords and predicting a civil war.

Zalmay Khalilzad, the US envoy to those talks, will meet separately in Doha on Thursday with the Taliban and Afghan officials to seek a reduction in violence, State Department spokesperson Ned Price said on Wednesday.

“What we are doing is galvanising the international community, supporting these intra-Afghan discussions, to attempt to make progress,” Price said.

Biden has said US troops have done all they can in Afghanistan — with thousands of Americans killed and wounded and more than $1-trillion spent over 20 years while training and equipping more than 300,000 Afghan forces.

Now, he said, there’s still hope that the fractious Afghan government will realise “they’ve got to come together at the top”.