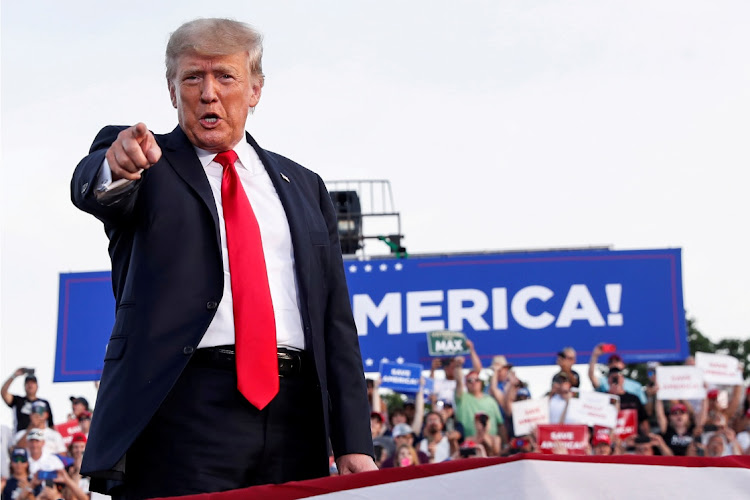 Former US president Donald Trump reacts at a rally in Wellington, Ohio, the US, June 26 2021. Picture: REUTERS/SHANNON STAPLETON

Former US president Donald Trump on Wednesday challenged in court last week’s justice department order to turn his tax returns over to a House of Representatives committee, part of his long campaign to keep details of his wealth secret.

In a filing in federal court in the District of Columbia, Trump’s lawyers said the House ways and means committee lacks a legitimate basis for seeking his federal tax returns, and that the department erred when it backed  the committee's request.

The department, reversing course from the stance it took when Trump was in office, on Friday told the Internal Revenue Service (IRS) to provide the Republican businessman-turned-politician’s tax records to congressional investigators —  a move he has long fought.

Trump was the first president in 40 years to not release his tax returns, as well as other documents, as he aimed to keep secret the details of his wealth and activities of his family company, the Trump Organization.

The Democratic-led ways and means committee has said it wants the tax data to determine whether the IRS is properly auditing presidential tax returns in general and to assess whether new legislation is needed.

The House ways and means panel has invoked a provision of US law that lets it obtain tax returns from the IRS to further a “legislative purpose”.

The department’s order “does a very good job of explaining” why that standard has been met, Repetti said.

Critics accused Trump of using the department to advance his personal and political interests during his four years in office, and the department has moved to reassert its independence since Democratic President Joe Biden took office.

After another legal fight, the Manhattan district attorney’s office in February separately obtained Trump’s tax and financial records in a criminal investigation centred on his company, though the material was not publicly disclosed. The US Supreme Court ruled against Trump in that case.

The Trump Organization and its longtime CFO Allen Weisselberg have been charged in what a New York prosecutor called a “sweeping and audacious” tax fraud. Trump himself was not charged in that case.

The organisation and CFO plead not guilty to charges of tax fraud, scheme to defraud, conspiracy and falsifying business records
World
2 months ago
Next Article