The 2,702-page bill, which will provide the biggest infusion of federal spending on public works in decades, was finished on Sunday after weeks of negotiations 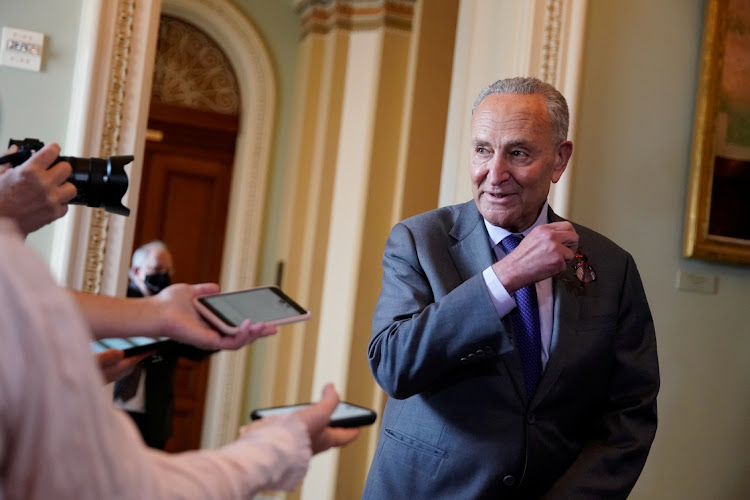 Senate majority leader Chuck Schumer speaks to reporters about the bipartisan infrastructure bill at the US Capitol in Washington, the US. Picture: REUTERS/ELIZABETH FRANTZ

The US Senate is heading towards passage this week of a $550bn infrastructure bill that would provide the biggest infusion of federal spending on public works in decades and mark a major milestone for President Joe Biden’s economic agenda.

Majority leader Chuck Schumer said the bill will pass “in a matter of days”, though minority leader Mitch McConnell made clear Republicans in the 50-50 chamber won’t be rushed and want numerous chances to offer amendments.

“Just as infrastructure itself is not a luxury but a necessity, the same goes for the Senate having a robust and bipartisan amendment process on legislation of this magnitude,” McConnell said on Monday on the Senate floor.

The 2,702-page bill, finished on Sunday night after weeks of negotiations, would ultimately touch Americans across the country, with broad subsidies for roads they drive on, water they drink and the electrical grid powering their homes and businesses. The bill is packed with benefits for numerous industries and regions.

“Every senator can look at bridges and roads and need for more broadband, waterways in their states, seaports airports, and see the benefits, the very concrete benefits, no pun intended, of this legislation,” Maine Senator Susan Collins, one of the GOP negotiators, said told CNN on Sunday.

It includes about $110bn in new spending for roads and bridges, $73bn of power grid upgrades, $66bn  for rail and Amtrak, and $65bn for broadband expansion. It also provides $55bn  for clean drinking water and $39bn for transit.

One provision that faced intensive lobbying provides for low-cost internet access plans as part of the huge broadband package. But in a nod to the telecoms industry it includes a clause making clear that the bill doesn’t authorise the government to set prices.

But Biden’s broader climate agenda, such as a clean energy standard and electric vehicle tax credits, isn’t in the bill. Those proposals still need the backing of West Virginia Democratic Senator Joe Manchin and every other Democrat as part of a follow-on package with the rest of Biden’s economic agenda totalling as much as $3.5-trillion over a decade.

The bill will be paid for largely by the equivalent of raiding the federal budget couch cushions for cash. Democrats were unwilling to cut much spending elsewhere, while Republicans early on declared a “red line” against Biden’s plans to raise taxes on corporations and the wealthy. Biden in turn nixed early talk of raising the fuel tax or imposing a tax on electric vehicles.

Offsets include such items as selling off billions of dollars worth of oil from the Strategic Petroleum Reserve starting in 2028, tapping assorted unspent Covid-19 relief accounts, extending some budget cuts from 2030 to 2031 and delaying a never-implemented prescription drug rebate rule under Medicare.

One item that has drawn fierce opposition in recent days would extend some tax reporting rules to cryptocurrency brokers — a move the joint committee on taxation says would raise $28bn, but the specifics of which drew a rebuke on Sunday from Senate finance chair Ron Wyden. A tax on chemical polluters would also raise an additional $14.5bn.

In total, the tax-related measures, including the cryptocurrency regulations, would raise $51.1bn  over a decade, according to an estimate from the joint committee on taxation on Monday, meaning less than 10% of the total revenue to pay for the roughly $550bn in new spending comes from tax increases. The remaining revenue offsets will be tabulated by the Congressional Budget Office, which has yet to release its projections.

Republican demands for an open amendment process could lead to dozens of votes over several days. Several Republicans spoke out against the cost of the plan, with Utah senator Mike Lee saying a vote should be delayed until after the Senate’s August recess to give legislators more time to review the bill.

“It took them four months, shouldn’t we at least have a month or two?” Lee said on the Senate floor.

Democrats are seeking consent from Republicans to hold three votes on Monday on bipartisan amendments to the deal. They are considered non-controversial and are cosponsored by Republican senators John Thune and Mike Rounds of South Dakota as well as Jerry Moran of Kansas and would need 60 votes to pass.

Senators of both parties say they expect the legislation ultimately will pass without major changes.

“Neither side got everything they wanted,” Mitt Romney, Utah’s other senator and one of the GOP negotiators, said on the Senate floor. “The American people have been waiting one president after another after another saying, ‘Let’s improve our infrastructure,’ and it just doesn’t get done. This time we have.”

Schumer said after the infrastructure bill passes the Senate would immediately turn to a budget resolution setting up a procedure known as reconciliation, which will allow Democrats to pass the bulk of Biden’s agenda without facing a filibuster by Republicans. Doing so could keep the Senate at work into next week, delaying the onset of an August recess scheduled to begin on August 9.

Schumer has committed to moving both the infrastructure bill and the budget resolution in tandem to keep the Democrats’ progressive and moderate wings in the House and Senate unified. The budget framework, which will enable a later bill including spending on child care, education and paid leave, as well as tax increases for the wealthy and corporations, would require every Democratic vote in the Senate, where the parties have a 50-50 split and a tiebreaker in Vice-President Kamala Harris. In the House, speaker Nancy Pelosi can spare the loss of only three Democratic votes.

However, Manchin and Democratic senator Kyrsten Sinema of Arizona have expressed reservations about the $3.5-trillion price tag currently being discussed, while progressives including New York representative Alexandria Ocasio-Cortez warn that she and her allies have enough votes to sink the infrastructure plan if their priorities aren’t addressed in the budget package.

“We can’t just have one body driving the entire legislative agenda for the country,” Ocasio-Cortez told CNN on Sunday.

Pelosi has said she won’t bring the bipartisan infrastructure bill to the floor until the Senate acts on the follow-on Democratic budget package.