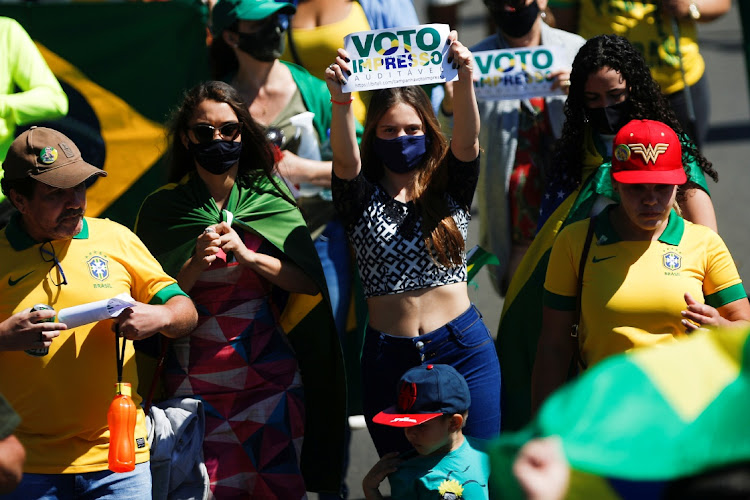 A supporter of Brazil's President Jair Bolsonaro holds a sign which reads "printed and auditable vote" during a protest in Brasilia, Brazil, August 1 2021. Picture: REUTERS/ADRIANO MACHADO

Brasilia  — A group of 18 active and former Brazilian Supreme Court judges, who also act as judges in the Supreme Electoral Court, said on Monday that the election system is free of fraud following a barrage of attacks by President Jair Bolsonaro.

At the weekend, protesters demanded that there be a paper trail of printed ballots, changing the South American country’s all-electronic voting system.

Bolsonaro has in recent weeks repeatedly claimed that the electronic voting system is subject to fraud, without providing any evidence. He has said he might not accept the result of next year’s presidential election if the system is not changed.

The judges said in a statement: “Brazil has eliminated a history of election fraud”, and that since the electronic voting system was adopted in 1996, there has never been a documented fraud case in any elections.

“The electronic voting system is subject to audits before, during and after the election”. The judges said all the steps are monitored by political parties, prosecutors, federal police, universities, and the Brazilian Bar Association.

The judges said printed ballots are less safe than electronic voting and that if Brazil goes back to manual counting of 150-million printed ballots, the chance of fraud would be higher.

The statement was sent by the judges after Bolsonaro said  in an interview with a radio station earlier on Monday that Supreme Court judge Luis Roberto Barroso, who heads the electoral court, “wants the elections to be manipulated”.

A congressional committee will vote on Thursday on a proposal pushed by Bolsonaro to introduce paper ballots.

Brazil’s leader, who was stabbed in the stomach in 2018, may need surgery after more than 10 days of hiccups
World
2 months ago

Brazil’s far-right leader is pushing a bill requiring the nation’s 470,000 voting machines to generate a paper record of each ballot
World
2 months ago

President Jair Bolsonaro has denied wrongdoing, saying on Monday he was not aware of any irregularities
World
2 months ago
Next Article