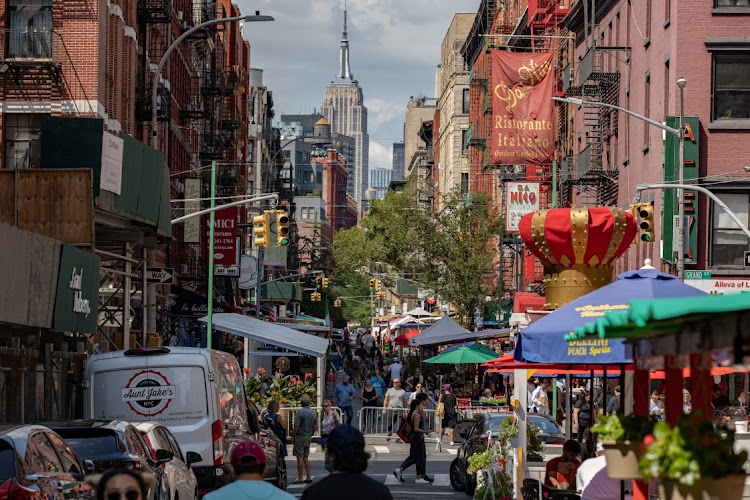 People walk down a street lined with outdoor seating for restaurants in the Little Italy neighborhood of Manhattan, in New York, the US, July 18 2021. Picture: REUTERS/JEENAH MOON

The rapid spread of the Delta variant sowed volatility in financial markets last week, but thus far economists are maintaining their forecasts for an historically strong US recovery.

Key to their relative confidence: officials are unlikely to order renewed lockdowns, and most consumers will not drastically alter their plans. Any change in that assessment, and bets are off.

“The Delta variant is posing a growing risk, but it’s probably not to the point that we should be making big, negative changes in our outlook,” Claudia Sahm, a former Federal Reserve economist who is now a senior fellow at the Jain Family Institute, said.

The outbreak has largely affected the unvaccinated so far, but Sahm said if it keeps spreading, “we’re going to find out a lot more about how much of that impacts the vaccinated and how much it freaks them out”.

For now, the rough consensus is that spending, travel and business activity will only be affected at the margin. Even late last year, when waves of Covid-19 cases hit the US, the recovery continued apace.

US GDP is on course to jump 6.6% this year, and quarterly growth rates will be handily beating the average of the past decade well into 2022, Bloomberg surveys of economists show.

Andrew Husby at Bloomberg Economics highlights three factors that give him some confidence:

Nationwide high-frequency data show that Americans continue to spend and eat out at restaurants, as seen from compilers including OpenTable. New York City last week saw demand for hotel rooms hit its highest since the pandemic hit.

Still, there are inklings of potential change: Los Angeles County has reimposed a mask mandate. Apple delayed its office reopening. In markets, longer-term Treasury yields — those most sensitive to the outlook for growth — on Thursday were heading for a fourth consecutive week of declines.

Here are the comments of a number of economists on the Delta variant’s economic impact:

“So far, we haven’t seen any impact in the US when it comes to real-time data,” said Aneta Markowska, Jefferies chief US economist. “In fact, it looks like momentum actually improved in June, with foot traffic in particular. And that requires the opposite of social distancing.”

If Covid-19 “spikes stay localised, it’s hard to imagine a big national impact. Is a school reopening in New York State or in California going to be delayed because of a localised outbreak in Louisiana? Probably not. Obviously, it’s a fluid situation. It changes the risk profile, but it doesn’t change the base case for the US outlook.”

JPMorgan trimmed its estimate for consumer spending growth to 4.5% for the third quarter from 5% previously. Still, with inventory gains offering upside risks, Feroli left this quarter’s GDP forecast unchanged at 8.3%.

“I do not think the impact will be marginal,” said William Spriggs, chief economist at the AFL-CIO. Policymakers are underestimating how many people will remain home from work amid rising infections, and that it will hit prime-age workers hardest this time, he said.

“Even though the most-affected states are extremely unlikely to shut down, people stopped economic activity because of local caseload — not because of public orders. So, we could see retail sales continue to remain flat, as they have since March.”

“The variant will do meaningful economic damage if it causes people to resume sheltering-in-place and forces schools to remain online when the school year starts in a few weeks,” Mark Zandi, chief economist at Moody’s Analytics, said.

“Odds are uncomfortably high there will be other variants that are highly contagious, virulent, and elude our vaccines,” he said. But, “putting aside these dark scenarios, it remains highly unlikely the Delta variant would short-circuit the economic recovery”.

“At least in the US, I just do not see the appetite for taking steps that would discernibly slow the economy — even mask mandates look like they will only be reapplied in a few places,” said Stephen Stanley, chief economist at Amherst Pierpont Securities.

Stanley pointed out in a research note to clients that even though cases have risen at a faster-than-expected pace, nearly half of Americans are now fully vaccinated and more are seeking to be inoculated each day as public health efforts ramp up. That limits the risk of the new Covid-19 variant and helps assuage consumers, he said.

In the UK, where the Delta variant spread rapidly before it became prevalent in the US, “hospitalisation and deaths remain so far below where they were the last time cases were this high”, said Neil Dutta, head of US economics at Renaissance Macro Research.

“I don’t see much downside to the economy. Consumers remain flush with cash and spending continues apace. Inventories remain low and are likely to rebuilt in the months ahead, supporting manufacturing production. Home builders are working through backlogs, particularly now as construction costs have moderated, supporting residential investment. Capital spending intentions remain strong.”