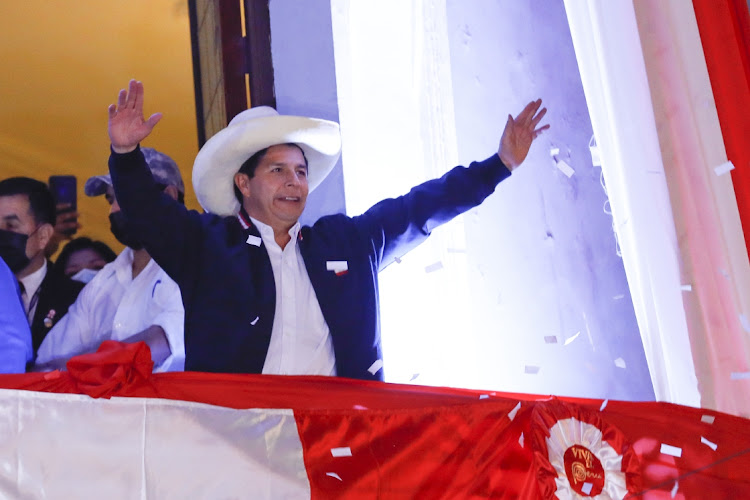 Pedro Castillo waves to supporters during a celebration after being confirmed as new president of Peru at the campaign headquarters on July 19 2021 in Lima, Peru. Picture: GETTY IMAGES/RICARDO MOREIRA

Peru’s Pedro Castillo, a rural union activist from a Marxist party, will take the reins of a deeply divided country after being declared president-elect following weeks of vote recounts, lawsuits and fraud allegations.

The result, proclaimed Monday night by Peruvian electoral authorities, will help to dispel the uncertainty that has gripped the Andean nation since the June 6 runoff. But it leaves Castillo, a teacher from the highlands with no previous experience of national politics, with the daunting challenge of trying to bridge an array of political, economic and geographical divisions laid bare by the election.

Castillo, who was virtually unknown six months ago, narrowly defeated right-wing candidate Keiko Fujimori, a leader of the country’s most powerful political clan. After alleging fraud and demanding the annulment of many votes, Fujimori said that she would accept authorities’ decision even as she called her opponent’s proclamation “illegitimate”.

Speaking right after the decision, Castillo thanked the Peruvian people and called for national unity, sending a special message to his main political adversary.

“I call on Ms Fujimori to not put up more barriers on this path,” he told a crowd of supporters from a balcony in a downtown Lima building. “Let’s not have more obstacles to move this country forward.”

He quickly received congratulations from Mexican President Andres Manuel Lopez Obrador and from the secretary general of the Organization of American States, Luis Almagro.

When he takes office on July 28, Castillo will inherit a nation in trauma. Peru has suffered the world’s highest death rate from Covid as well as a deeper economic slump than all the other major economies in the Americas. The country has also seen exceptional political volatility, with three presidents in little more than a week last year.

Castillo ran on the slogan “No more poor people in a rich country,” meaning that the nation’s vast mineral wealth must benefit ordinary people. He swept the rural and Andean regions of the country, while Fujimori won the capital Lima and coastal cities in the north.

He says his focus will be on education and health, making him the face of Latin America’s resurgent left and a symbol of growing disenchantment with elites following the ravages of the pandemic.

Castillo won by 50.1% to 49.9%, and Fujimori’s party alleged irregularities and tried to cancel votes deemed as fraudulent. The US and the EU said the ballot was clean.

His election initially spooked investors, but the nation’s bonds and currency rallied after he appointed mainstream economists as advisers, and pledged to respect the central bank’s autonomy.

His chief economic adviser, Pedro Francke, has called for fiscal prudence and inflation-targeting, and is opposed to nationalization of companies. But Marxists from Castillo’s Peru Libre party will try to get him to pursue a more radical course.

Castillo’s ability to govern is likely to be hampered by his limited support within congress, which is dominated by the centre-right. He will face not only opposition but the very real threat of impeachment, which was used to oust former President Martin Vizcarra.

His narrow victory, nonetheless, represents one of the most meteoric political journeys in recent history. Castillo rose from being a little-known union organizer just months ago to lead a country of 32 million struggling through one of the worst periods in its history.

His promises to raise corporate taxes, rein in big companies and pump 20% of economic output into social welfare struck a chord with the rural poor. But those same policies, and the roots of his political party, worried investors, who’d been used to Peru being one of the continent’s fastest growing and most reliable economies, even amid bouts of political turmoil.

While his Free Peru party was founded by a Marxist neurosurgeon who praised autocrats such as Cuba’s Fidel Castro, Castillo has tried to distance himself from party radicals.

During the campaign, Castillo criss-crossed the country wearing a broad straw-hat, riding a horse to the polls and dancing with supporters. He carried a giant pencil to signify his focus on education. On April 11, he beat 17 other candidates to win the first-round vote.