Federal court sends first of US Capitol rioters to jail 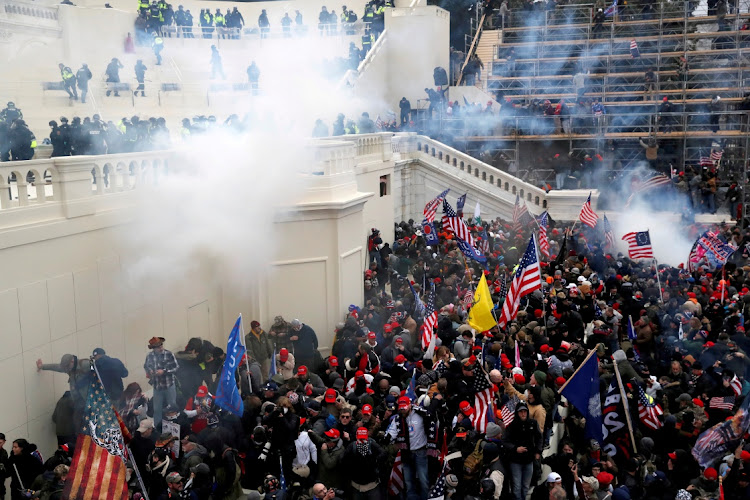 Police fire teargas into a crowd of pro-Trump protesters at the US Capitol Building in Washington, the US, January 6 2021. Picture: REUTERS/SHANNON STAPLETON

Washington  — A federal judge on Monday sentenced the first of  more than 530 people facing criminal charges over  the January 6 US Capitol attack to  eight months in prison.

Paul Hodgkins pleaded guilty on June 2 to one felony count of obstruction of an official proceeding, as Congress was in the process of formally certifying Joe Biden’s election last November as US president when supporters of then-president Donald Trump rampaged through the building.

Prosecutors had asked US district judge Randolph Moss to impose a sentence of 18 months in prison. Hodgkins’s lawyer, Patrick Leduc, had urged that his client serve no prison time.

During a sentencing hearing, Hodgkins told Moss he is “remorseful and regretful” for his actions and acknowledged that his conduct may have emboldened others to engage in destructive acts.

“This was a foolish decision on my part that I take full responsibility for,” added Hodgkins, a Tampa, Florida, resident who works as crane operator for a steel company.

Prosecutor Mona Sedky told the judge that Hodgkins donned protective goggles before entering the Senate chamber during the riot and “proudly posed for selfies”, which he texted to friends. Sedky acknowledged that Hodgkins did not destroy any property “and he did not injure anyone”.

Moss agreed that Hodgkins had not been violent, did not threaten anyone and did not organise the Capitol attack. But the judge said Hodgkins went to the Capitol “to impede the certification of the election, and he admitted that he did so”.

The judge said that while he believes Hodgkins’s participation in the riot was an “aberration in his life”, he also believed the attack had “tarnished” US history and that future riots needed to be deterred.

More than 535 people have been charged with taking part in the attack, which followed Trump's repeated false claims that the election was stolen from him through widespread voting fraud.

Hodgkins became the first person facing charges stemming from the riot to be sentenced to prison. The only other person so far to be sentenced on riot-related charges, Anna Morgan-Lloyd of Indiana, pleaded guilty to a misdemeanour and received three years of probation.

Moroccan Abdul Latif Nasir, imprisoned since 2002 and cleared for release in 2016, has been transferred from the US military prison
World
2 weeks ago