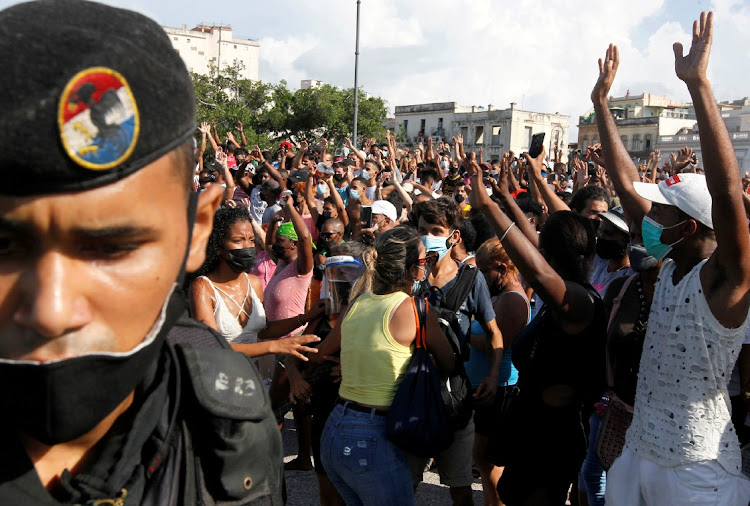 NetBlocks, based in London, said on its website that the platforms in Cuba were still partially disrupted on Tuesday, which was “likely to limit the flow of information from Cuba”.

The government did not immediately respond to a request for comment. Neither did Telegram and Facebook Inc, which owns Instagram and WhatsApp. Social platform Twitter Inc said it found no blocking of its service.

Thousands of Cubans joined demonstrations in cities and towns throughout the country on Sunday to protest against Cuba’s economic crisis and handling of the pandemic, with some calling for an end to communism.

The government has said the demonstrations were orchestrated by US-financed counter-revolutionaries, manipulating frustration with an economic crisis largely caused by the decades-old US trade embargo.

Underscoring the government's concern, state-run media reported on Tuesday that Raúl Castro, who stepped down as head of the ruling Cuban Communist Party in April, attended a meeting on Sunday of the political bureau to address the “provocations”.

Party leader and President Miguel Diaz-Canel said in April he would continue to consult Castro on matters of utmost importance.

US secretary of state Antony Blinken said on Monday that believing the demonstrations were US-directed would be a “grievous mistake” and show the government was not listening to the voices of the Cuban people.

Mexican President Andres Manuel Lopez Obrador said on Tuesday the tough situation in Cuba was “basically” due to the US economic embargo against the country.

Mexican foreign minister Marcelo Ebrard said on Tuesday he had spoken to his Cuban counterpart to determine what sort of humanitarian aid would help the Caribbean nation.

The protests, rare in a country where public dissent is tightly restricted,  stalled as police and military were deployed to the streets and Diaz-Canel called on government supporters to go out and fight to defend their revolution.

Still, a protest took place in the southern Havana suburb of La Guinera late on Monday, according to five locals and video footage obtained by Reuters.

Hundreds of protesters faced off with police, shouting “down with communism” and other antigovernment slogans, said two residents who requested anonymity for fear of reprisals, adding that they had heard gunfire.

About 150 people were arrested during or following the biggest wave of protests in various cities at the weekend, according to exiled rights group Cubalex, and only 12 had been confirmed released so far.

“In the multiple interrogations, we made it clear that no-one was directing us from abroad to take to the streets, that no-one paid us a centavo to do what we did,” theatre director Yunior Garcia, who was arrested at a protest in Havana on Sunday, wrote on his Facebook page.

He said he was released on Monday but police officials told him he remained under investigation.

The introduction of mobile internet two-and-a-half years ago is a key factor behind protests in Cuba, giving Cubans more of a platform to express their frustrations and enabling the word to get out quickly when people are on the street.

Reuters witnesses in the capital said on Tuesday they still had no mobile data.

Mobile internet outages have increased in 2021. Network monitoring company Kentik said it observed the entire country go offline for less than 30 minutes at about 4pm on Sunday, during the peak of protests in Havana.

Social media platforms are facing increased demands from governments globally to take down certain content, and in some cases are seeing their services restricted or banned during times of protests.

On June 4, Nigeria announced it had indefinitely suspended Twitter in the country, days after the platform removed a post from President Muhammadu Buhari.

Cuban vaccine producers expect emergency use authorisation in June, while government says it wants to get a head start on curbing infections
World
1 year ago

Are Cuban engineers here to teach us how to cope when our infrastructure implodes?
News & Fox
1 year ago