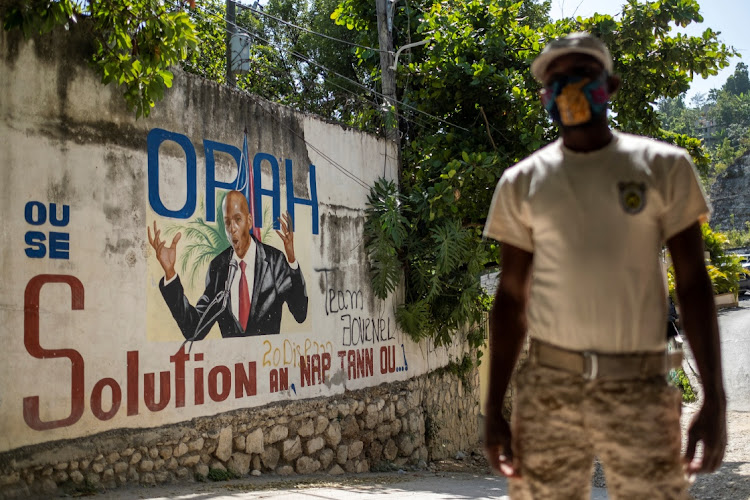 A Haitian police officer stands near a mural featuring late Haitian President Jovenel Moise at the entrance of the house where he was assassinated, in Port-au-Prince, Haiti, July 11 2021. Picture: REUTERS/RICARDO ARDUENGO

A Haitian man who has lived in the US was arrested for allegedly recruiting the hit squad that assassinated President Jovenel Moise, as police say they are closing in on the masterminds behind the plot.

Christian Emmanuel Sanon arrived in Haiti on a private aeroplane in early June with the intention of seizing the presidency, Haiti’s police said in a statement on Sunday.

Officials accuse Sanon of recruited former Colombian soldiers to carry out the July 7 assassination. After the murder, Sanon was the first person the alleged attackers called, they said. In turn, Sanon was in contact with two other unidentified people who are “suspected as intellectual perpetrators” of the crime, the police said in a statement.

The murder has stoked a power struggle and more unrest in the impoverished nation amid government pleas for the US to send troops. Interim President Claude Joseph has been leading the country of 11-million since the murder, but his claim on the government is disputed.

Public records show Sanon has lived in Florida, New York and Missouri, and in a 2011 YouTube video he identified himself as a doctor.

In that video, he denounces government corruption and says he will “bring hope” to Haiti’s poor and neglected masses.

E-mails and phone calls to accounts associated with Sanon were not immediately answered.

Many Haitians have expressed scepticism about the official version of events, since the alleged killers didn’t appear to have an escape plan despite staging a carefully executed raid in which none of the president’s security guards were killed.

Family members of some of the arrested men say they travelled to Haiti under the impression they would be working as bodyguards. But once they were in Haiti, they were told they would serve an “arrest warrant” against Moise, the police said.

US secretary of state Antony Blinken on Monday urged Haiti’s political leaders to work towards holding free and fair elections later in 2021.

So far, authorities have arrested 21 people for the murder: 18 Colombians, two Haitian Americans who say they were working as translators, and Sanon.

Haitian police say 28 people carried out the attack against the president, 26 of them Colombians and two US citizens of Haitian descent
World
3 weeks ago

Moise, accused by human rights groups of links to the gangs, was ruling by decree and increasingly seen as an autocrat
World
3 weeks ago
Next Article