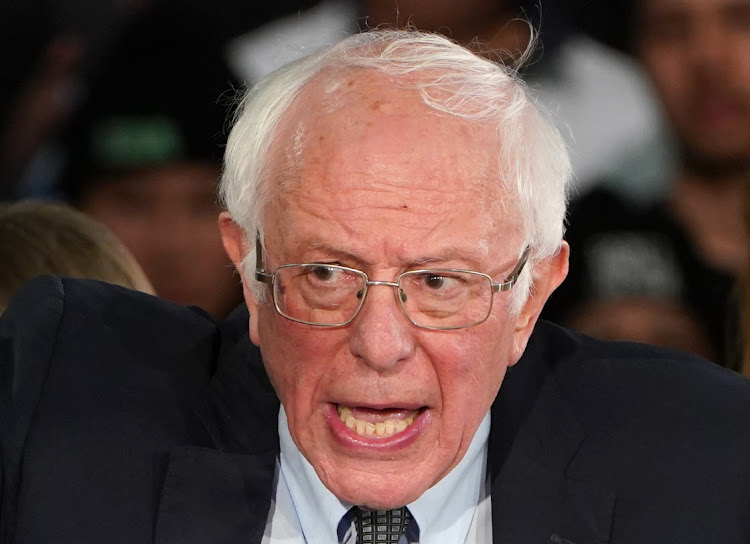 Bernie Sanders speaks to supporters in Des Moines, the US. Picture: REUTERS/CARLO ALLEGRI

President Joe Biden’s plans for the biggest expansion in social spending in decades is in the hands of the Senate’s only professed democratic socialist, Bernie Sanders, who must unite fellow progressives and moderate Democrats in the face of a tricky path through a sharply divided Congress.

Sanders, who chairs the Senate budget committee, wants to address income inequality and environmental challenges — central to his two failed White House bids — on an even greater scale than Biden. His opening bid for a $6-trillion package vastly outweighed the about $4.5-trillion vision the president outlined in the spring.

To succeed, the 79-year-old Vermont independent needs the votes of the entire Democratic caucus, including moderates such as senators Joe Manchin of West Virginia and Kyrsten Sinema of Arizona, to overcome almost certain opposition from all 50 Republicans in the chamber.

It is a task before a legislator known less for give-and-take compromises than for staking out far-left, unyielding positions. Yet those working with him say he is negotiating daily towards a consensus measure that is likely to be notably smaller than his initial pitch — while seeking to build in the priorities of individual Democrats.

“I’ve found him to be totally realistic and flexible” in discussions on a broad fiscal plan, said House budget committee chair John Yarmuth, a Kentucky Democrat who is working with Sanders to produce identical proposals in coming days. “He’s not just standing up on an altar and preaching. He’s working it, and I feel good about the way he’s managing it.”

Sanders, who declined an interview, said before a two-week Senate recess began in June he thought $6-trillion “the appropriate amount of money to address the crises facing this country, but obviously I have to work with 49 other senators to come up with a bill”.

An initial measure, known as a budget resolution, will open the way towards a so-called reconciliation package that is expected to encompass many tax increases on companies and the wealthy, with trillions of dollars of spending in areas Sanders has championed for years — such as climate change, expanded health and child care and free tuition at community colleges.

Sanders also said in June he will do what he can to help nudge the US well towards the Left in this debate.

“Our job right now is to continue working on a major bill that addresses the crises of working families and, by the way, has the wealthy and the powerful large corporations start paying their fair share of taxes,” he said.

Republicans on the budget committee expect little outreach and say time will tell if Sanders can manage Democrats’ competing demands.

A two-time runner-up for the Democratic presidential nomination, Sanders already influenced a leftward shift in the Democratic Party through his time on the campaign trail in 2016 and 2020. Biden has embraced a series of progressive priorities, including an expanded child tax credit and subsidies for clean energy, and made an attempt at increasing the national minimum wage earlier in 2021.

In this year’s economic-agenda debate, Sanders wants to go further than the White House. Besides the administration’s proposals for expanded tax credits for lower- and middle-income families, universal pre-kindergarten, more health-care premium subsidies for Obamacare and more funding for public housing and infrastructure, Sanders wants more for climate change, electric buses and cars, improvements in the power grid and residential solar technologies.

The Vermonter is also pursuing some initiatives Biden is not, such as lowering the Medicare eligibility age to 60 from 65 and expanding its health benefits for the elderly to dental, vision and hearing. He wants to expand the federal deduction for state and local taxes, or Salt, that was limited in 2017 and provide green cards for immigrants including migrant agricultural workers and so-called dreamers — young adults brought to the US illegally as children.

The draft budget outline from Sanders relies for about half of its financing from increased debt, with $2.4-trillion coming from tax hikes.

That is sharply different from what key centrist Manchin has supported.

“If they think, in reconciliation, I’m going to throw caution to the wind and go to $5-trillion or $6-trillion when we can only afford $1-trillion or $1.5-trillion or maybe $2-trillion and what we can pay for, then I can’t be there,” Manchin said on ABC’s This Week on June 27.

Yarmuth said Sanders is talking regularly with senate majority leader Chuck Schumer and potential defectors, a process that will continue after the Senate and House return to work in the coming week.

Sanders typically does not participate in the Senate “gangs” that seek bipartisan bargains, and he has not backed the $579bn infrastructure plan worked out by five Democratic and five Republican senators, which Biden has endorsed.

Still, Sanders has shown the occasional ability to cut a deal.

In 2014, as chair of the Senate Veterans Affairs Committee, he forged a compromise that yielded a $17bn overhaul of the department of veterans affairs after findings about excessive health-care wait times and poor treatment of veterans. It overwhelmingly passed the Senate and House.

If Sanders succeeds in getting a budget resolution through the Senate, which then passes also in the House — where speaker Nancy Pelosi can only afford to lose three or four from her caucus — focus will shift to the specific committees charged with detailing policy measures.

Later in the legislative process, Sanders will again be in focus in a partisan battle before the Senate parliamentarian if there are divisions over what qualifies for filibuster protection inclusion in the reconciliation bill, which needs just a simple majority for passage. He will then help shepherd the measure through a gruelling “vote-o-rama” of unlimited amendments, which could change the bill to make it unpalatable to the House.

Sanders is well aware of the limitations of reconciliation packages.

He lost a bid to include a $15-an-hour nationwide minimum wage in the $1.9-trillion March pandemic-relief bill. Back in 2017, he was on the winning side in a battle against a Republican drive for a comprehensive measure repealing Obamacare, successfully arguing to the parliamentarian that some key provisions failed to meet requirements. Republicans instead were forced to pursue a “skinny repeal” of the law, which failed on the floor.

“He’s worked very hard on both a bipartisan basis and with his Democratic colleagues in the past to move legislation successfully through Congress,” said Eric Ueland, who was the Senate budget committee’s GOP staff director in 2017 and later served as White House legislative affairs director under President Donald Trump. “I suspect we’ll see that again in the next few months as this process unfolds.”