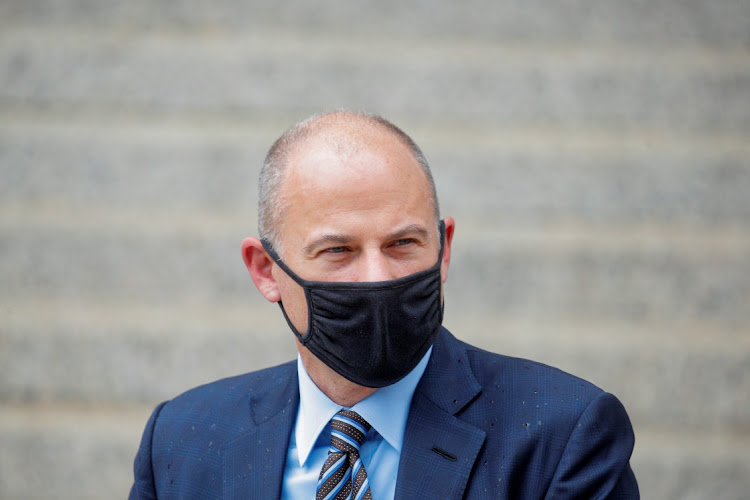 Attorney Michael Avenatti exits, following his sentencing for an extortion scheme against Nike Inc., at the United States Courthouse in the Manhattan borough of New York City on July 8 2021. Picture: REUTERS/BRENDAN MCDERMID

Michael Avenatti was sentenced to two and a half years behind bars for attempting to extort $25m from Nike, marking a steep fall for a celebrity lawyer who shot to national attention by styling himself as a foil to former president Donald Trump.

US district judge Paul Gardephe in Manhattan handed down the prison term on Thursday after a long delay due to the pandemic. Avenatti, 50, was found guilty on all counts in February 2020 after a three-week trial.

The sentence was significantly lower than what the government sought. Gardephe said a lower sentence was warranted due to the miserable conditions Avenatti endured while locked up in a Manhattan jail before trial, as well as the government’s decision not to charge another lawyer who worked with Avenatti in the Nike talks, even though that attorney was “a central figure in the criminal conduct.”

But the jail term is not the end of the legal woes for Avenatti, who was a fixture on cable news networks in 2018 while he represented adult film star Stormy Daniels and even weighed a run for the White House.

He is due to go on trial again this month in California where he is accused of defrauding clients and ripping off banks. And early next year a third trial is scheduled in Manhattan on federal charges alleging he stole Daniels’s book advance. He has denied wrongdoing in all the cases.

The California lawyer, wearing a dark suit and a mask, hugged a few family members as he entered court for the sentencing, chatting casually with them. But he broke down as he implored the judge to show leniency before the sentencing.

“I betrayed my own values, my friends, my family and myself,” he told the judge, crying. “I betrayed my profession. I became driven by things that don’t matter in life.”

The Probation Office had calculated that Avenatti should spend 11 to 14 years in prison under current guidelines. Avenatti had asked in a court filing for no more than six months.

Gardephe made it clear he was concerned about the government’s decision to not charge California lawyer Mark Geragos, who worked closely with Avenatti on the Nike matter and “sat by silently” while Avenatti tried to extort the company.

Geragos was identified early on by prosecutors as a co-conspirator, but he was not accused of wrongdoing, a point that Avenatti frequently raised in seeking to have the case tossed out. Gardephe on Thursday said Geragos stood to benefit greatly from the scheme, and that he and Avenatti played “good cop, bad cop” with Nike. The government’s decision to not charge him “has never been cogently explained,” the judge said.

Geragos did not immediately respond to a message seeking comment.

Avenatti was charged in March 2019 after he met with Nike attorneys to discuss claims by his then-client, a youth basketball coach, that the company bribed top players to attend colleges with Nike-sponsored teams. The US said he threatened to make the claims public if Nike did not pay him as much as $25m to investigate the alleged corruption.

The jury did not buy Avenatti’s defence that he had merely engaged in tough negotiations on behalf of his client, who wanted him to “take on” Nike.

Defense lawyer Danya Perry spoke to the court before the sentence was handed down, describing Avenatti as a devoted father of three who was known for working hard for his clients before his career imploded.

“He certainly has lost his way, and he knows that,” Perry said, adding that her client is in particular ashamed of the secret tape recordings of his attempt to shake down Nike, which were played for the jury during trial.

“I know how those tape recordings sound,” Perry said. “They almost made my skin crawl.”

Avenatti gained a national profile while representing Daniels in a suit against Trump, making regular television appearances to bash the president and his former fixer, Michael Cohen, over a hush-money payment to his client before the 2016 election.

According to the conservative-leaning media-tracking site NewsBusters, in the year ending April 2019 Avenatti made 254 appearances on cable news networks, 122 on CNN and 108 on MSNBC.

He still has almost 700,000 followers on Twitter, supporters who ate up his pugilistic style, frequently proclaiming him a hero who would take down Trump.

“All the fame, notoriety and money in the world is meaningless,” Avenatti told the judge, before his sentencing. “TV and Twitter, your honour, are meaningless.”

Trump had called Avenatti a “third-rate lawyer” and a “total low life” in a Twitter posting.

The public clash led to early claims by the brash lawyer that Trump’s justice department had set him up to silence a critic, but that allegation was rejected early on by the judge. Jurors were never presented with that defence.