Moise, accused by human rights groups of links to the gangs, was ruling by decree and increasingly seen as an autocrat 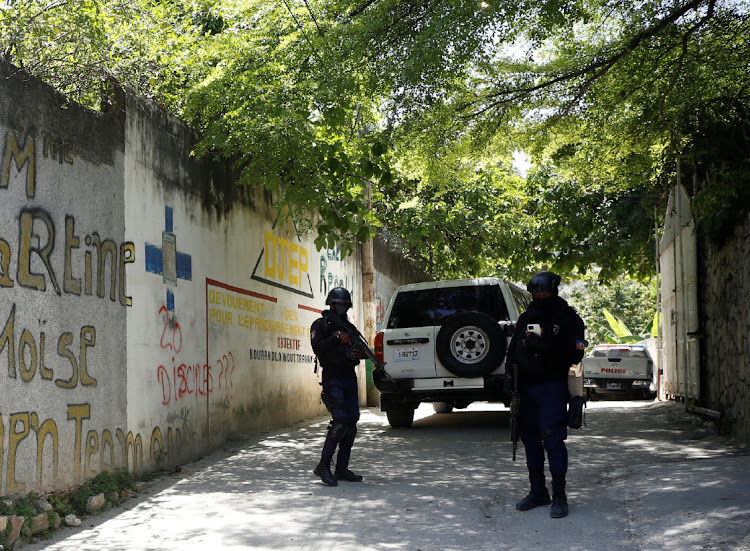 Police stand guard near the private residence of Haiti’s President Jovenel Moise after he was shot dead by gunmen with assault rifles, in Port-au-Prince, Haiti, on July 7 2021. Picture: REUTERS/ESTAILOVE ST-VAL

The troubled Caribbean nation of Haiti was plunged into chaos after its president, Jovenel Moise, was assassinated in a night-time raid and acting Prime Minister Claude Joseph declared a state of emergency.

Joseph said the president was murdered by highly trained and heavily armed killers who stormed the presidential residence above the capital Port-Au-Prince at about 1am on Wednesday. The first lady, Martine Moise, was also injured in the attack and Haiti’s ambassador to Washington, Bocchit Edmond, said she was being medically evacuated to South Florida.

Miami’s Local 10 News said the first lady had been taken to Jackson Memorial Hospital in stable but critical condition, with gunshot wounds to her arms and thigh.

The National Police said Wednesday night that four suspects had been fatally shot and two others arrested, according to the Associated Press. Leon Charles, the police chief, said three police officers taken captive by the gunmen had been freed.

The country’s communication secretary, Frantz Exantus, said on Twitter that the “presumed assassins” had been “intercepted” by the National Police. He did not elaborate.

The UN Security Council, in a statement on Wednesday night, condemned the assassination and called “on all political stakeholders in Haiti to refrain from any acts of violence and any incitement to violence.”

A nation of 11-million and the poorest in the Americas, Haiti has been terrorised for months by gang violence, driving thousands from their homes. President Moise, accused by human rights groups of links to the gangs, was ruling by decree and increasingly seen as an autocrat. Elections were scheduled for September but concerns were growing about whether they would be held.

“It’s highly likely that this was political violence in the prelude to the elections,” said Alan Zamayoa, an analyst at Control Risks who covers Haiti. He said Moise had been challenged by a series of crises — the unraveling economy, corruption allegations, deteriorating security and his attempts to carry on for another term.

Joseph, the interim prime minister, said he wanted an international investigation. He said the elections should be held as planned and pledged to work with Moise’s allies and opponents alike.

US President Joe Biden condemned the assassination as a “heinous act”, echoed by numerous regional and world leaders. He pledged to help work for “a safe and secure Haiti”.

That’s a tall order. Haiti is close to being a failed state in the grip of armed bandits who make a living through extortion and kidnapping. The pandemic has only made things worse with not a single vaccination yet administered. On top of that and a desperately faltering economy, the country is undergoing a constitutional power struggle stemming from a chaotic election which saw Moise only sworn in 15 months after a first-round vote.

Haiti’s security forces need international help to control the country, ambassador Edmond said. Video of the incident appears to show the attackers speaking English and Spanish, and presenting themselves as agents of the US Drug Enforcement Administration, he said. Since Haitians speak French and Creole, the suggestion is there is foreign involvement.

Port-au-Prince was mainly quiet during the day.

“There is no one on the street. Everyone is waiting to see what comes next,” said Jean Chevalier-Sanon, director of Haiti’s National Para-Olympic Committee, in a phone interview from the capital in the morning.

Moise had governed by decree since January 2020, when parliamentary terms expired without elections being held. He’d said his five-year term would run until February 2022, while the opposition said his term ended last February.

Adding to the uncertainty, this week Moise appointed Ariel Henry as prime minister, though he wasn’t sworn in, leaving Claude Joseph acting on an interim basis.

Since a popular uprising ended the 15-year rule of Jean-Claude “Baby Doc” Duvalier in 1986, Haiti has had numerous government changes, with about 20 administrations trying to exercise power. In 2010, it suffered a devastating earthquake that killed some 220,000 and left more than a million homeless. It hasn’t completely rebuilt, with disease and homelessness rampant.

Haiti’s economy contracted 3.7% in 2020, a smaller downturn than most other Caribbean nations, which suffered a slump in tourism.

At a time of mounting challenges across Latin America — the coronavirus, street demonstrations, food insecurity — Haiti hasn’t been a high priority for Washington or other powers, and there is little to suggest that will change soon.

It shares the island of Hispaniola with the Dominican Republic and in past years the border has acted like a pressure release valve as Haitians have gone there to work and send money back. Since the pandemic, the border has often been closed, adding to the difficulties.

Haiti’s early history is a source of great national pride. In a brave and remarkable slave rebellion, Haitians threw off French colonial rule, defeating Napoleon Bonaparte’s forces in 1803. The following year, Haiti became the first independent nation of Latin America and the Caribbean and the first to abolish slavery. But it faced ostracism and occupation for decades, and has never known stability or prosperity.

Laurent Lamothe, who was prime minister of Haiti from 2012 to 2014, said by phone that he was shocked at what had happened and the world needed to take notice and step in.

“There needs to be an international investigation,” he said. “Everyone should participate to ensure that those responsible and those that financed it — because these were mercenaries so someone had to pay them — are brought to justice.”