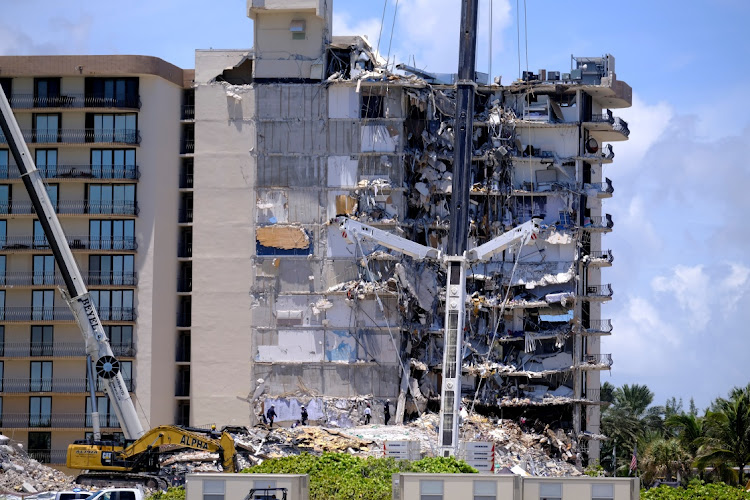 Search and rescue personnel continue searching for victims days after a residential building partially collapsed in Surfside near Miami Beach, Florida, the US, in this June 27 2021 file photo. Picture: REUTERS/MARIA ALEJANDRA CARDONA

Miami — The deadly collapse of an apartment building in Florida isn’t likely to end coastal living, but it could make it much more expensive.

Authorities still don’t know what caused Champlain Towers South to give way in June in Surfside, Florida, killing at least 46 people and leaving more than 90 unaccounted for. But early leads point to cracked concrete and frequent flooding in the building’s garage — damage that apparently went unaddressed for years amid questions over how to fund repairs.

The developments show the cost of maintaining older buildings against the deleterious effects of the rising sea, a burden many retirees and others on a fixed budget simply can’t shoulder. As regulatory scrutiny increases on ageing structures, developers in South Florida may simply raze more-affordable apartments built before the 1990s and replace them with luxury towers.

“A very real possibility is the old being replaced with the new, a gentrification of greatly increased prices,” said Jack McCabe, a Florida-based real estate consultant. “If you’re in South Florida, that means you are probably going to be a millionaire or multimillionaire or billionaire to be able to afford it.”

South Florida has become a bellwether for the effects of climate change, with billions of dollars of real estate often sitting on porous limestone in the heart of hurricane country. It’s also one of the US’s hottest residential real estate markets, where the rich come to live and play but the working class have already been priced out of many parts of the urban core.

Based on income, the Miami metropolitan region is the second-most unequal area with a population above 1-million in the continental US, after only New York City, according to the US Census Bureau’s Gini Index.

The tower in Surfside wasn’t glitzy, populated mainly by retirees and middle-class residents. When it fell, the disaster triggered a rush to review other apartments that have languished. Miami-Dade County mayor Daniella Levine Cava and other officials called for audits. McCabe, the analyst, said he counted at least 79 buildings in Miami-Dade and neighbouring Broward County that are on the water and built before 2000.

Even if the older buildings aren’t replaced, the cost of living there could increase in other ways. Florida legislators and local leaders are weighing proposals to ensure that coastal condominium associations have sufficient oversight and funding to make timely repairs, potentially driving up artificially depressed homeowner’s association fees or leading to exorbitant special assessments. Those charges can reach into the tens or hundreds of thousands of dollars per unit for the most seriously underfunded associations.

“There are many buildings that have not been subject to consistent, continuous inspections and not seen maintenance, just like our roads and bridges,” McCabe said.

It could take a year or more to fully understand what prompted part of the 12-storey building to collapse early June 24, and it’s still unclear the extent to which design, land, rising seas and intensifying storms may have played a role.

But a 2018 engineering report had already revealed significant deterioration, and the repairs were set to cost more than $15m — enough to upend household budgets in much of the 136-unit building. The special assessment was almost as much as many of the units originally cost in the 1980s. (Two-bedroom, two-bathroom units sold in the 1980s for less than $200,000, but have recently gone for more than $700,000.)

Fort Lauderdale attorney Gregg Schlesinger, who specialises in construction failure litigation, said buildings could be much older than 40 years and remain structurally sound — as long as maintenance is carried out regularly.

“If it’s well preserved and proper maintenance is done, you have no problem. None. Zero,” he said. “However, when it comes to condo associations, people that are on fixed budgets, elderly people and elderly condos that don’t want to pay the assessments and they kick the can down the road. That’s a recipe for disaster.”

Insurance companies may also make it harder to get coverage for older beachfront buildings, and lenders may pull back from financing mortgages, McCabe said, adding that areas of concern could extend along both of Florida’s coasts and into Gulf states, the Carolinas and Virginia.

The ripples of the collapse are being felt in apartments including Crestview Towers in North Miami Beach, which was evacuated on July 2 as part of the audit of older buildings. The 1970s-era structure with 156 units has many units that originally sold for about $30,000, and have recently traded at under $200,000 — pricing that’s increasingly hard to find just minutes from the glitzy towers of Sunny Isles Beach. Crestview residents, who had already been hit with a special assessment before the evacuation, now face uncertain living arrangements and even more financial hardship.

Esmie Moffatt, a 71-year-old retiree, had to leave behind her personal documents and hospital bed and move in with her daughter Sharon, who spoke on Esmie’s behalf because her mother was ill and bedridden. She said the rising costs of living in the poorly maintained Crestview, where her mother has owned a unit for 23 years, had already been pressuring the family.

“We have to help her, and it’s very difficult because everyone has their own bills to take care of,” she said. “And then just to be kicked out like that — they don’t treat animals the way they treated us.”

Real-estate agent Beatriz Isaza, 42, had to flee Crestview on Friday with her six-month-old daughter. A city official offered them a spot at a homeless shelter. She declined, and moved into her brother’s one-bedroom apartment. She said she was anxious that the repairs might mean even higher homeowner fees on top of the $500 she already pays, which includes the prior special assessment.

“If they come out and say we need millions to repair the building and every apartment needs to pay $100,000, I can’t pay it,” she said.

Isaza may not have an option. South Florida’s real-estate market had been humming, an outperformer in the late-pandemic boom amid low interest rates and heightened demand for the Sunshine State’s tropical, zero-income-tax lifestyle. The average sale price of town houses and apartments surged 64% in May to $676,675 from a year earlier, according to the latest report from Miami Realtors.

But the uncertainty surrounding the Champlain Towers South disaster has sent a chill through the market, and it’s unclear how long it will last.

“If I wanted to sell my apartment and live elsewhere, I would be selling at a bad moment, and at a really low price,” Isaza said. And she’d likely end up spending much more, “because rents in Miami are crazy right now”.