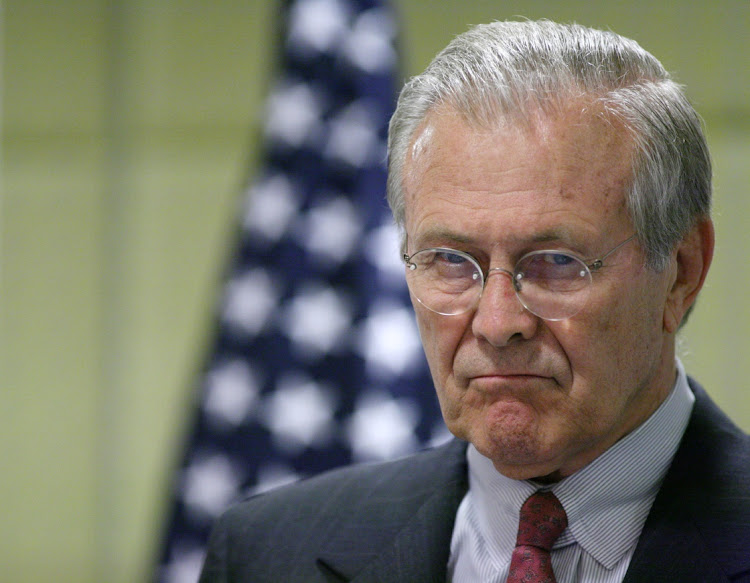 Donald Rumsfeld, the defence secretary who became the face of US foreign policy under former president George W Bush while the administration’s troop deployments toppled hostile regimes in Afghanistan and Iraq, has died. He was 88.

His death was confirmed by the Associated Press, citing Rumsfeld’s family. No details were provided.

Along with former US vice-president Dick Cheney, Rumsfeld was one of the main architects of Bush’s Middle East wars, triggered by the terrorist attacks of September 11 2001, when one of four hijacked airliners crashed into the Pentagon while he was still in the building. Rumsfeld’s job then evolved to include fighting two of the longest wars in US history, during which he was called upon to finesse the administration’s military shortcomings at press conferences.

“Defending against terrorism and other emerging 21st-century threats requires that we take the war to the enemy,” Rumsfeld said in speeches in 2002.

A former politician and bureaucrat, Rumsfeld was already a seasoned executive when he began his second term in the job as Bush came to power in 2001. During the 1970s, he became the youngest-ever defence secretary, at age 43, in then-president Gerald Ford’s administration. At the end of his tenure under Bush, he was the oldest American ever to hold the job.

Rumsfeld was assigned the task of reforming the military for the new challenges of the 21st century and ended up taking much of the flak for protracted campaigns abroad as the Pentagon budget swollen. His insistence on using light invasion forces in both Afghanistan and Iraq, and his lack of planning for the post-invasion periods were among the most salient criticisms of his tenure.

“Stuff happens,” Rumsfeld said in response to a reporter’s question about looting in Baghdad after the US had ousted Saddam Hussein in 2003. “There is untidiness.”

Rumsfeld became a figure of controversy as the wars ground on against a backdrop of rising insurgency. There were scandals over alleged torture of prisoners at Abu Ghraib in Iraq and Guantánamo Bay, Cuba, while the US failed to find Iraqi weapons of mass destruction, the pretext for the invasion. His brusque attitude and gnomic utterances such as “known unknowns” and “unknown unknowns” made him a lightning rod for the wars’ sceptics.

“You go to war with the army you have, not the army you might want or wish to have at a later time,” Rumsfeld said in 2004 in response to a soldier’s question about inadequate Humvee armour, according to a New York Times article in 2004. The comment drew condemnation, partly because it was the administration that had chosen the invasion date — March 20 2003.

By 2006, Rumsfeld’s popularity within the US armed forces had declined to the point where six retired generals, including some who had served in Iraq, called on him to resign. Bush accepted Rumsfeld’s resignation on November 7, a day after Democrats captured both houses of Congress in midterm elections.

Donald Henry Rumsfeld was born on July 9 1932, in Chicago, according to his 2011 memoir, Known and Unknown. He was the son of George Rumsfeld, a real-estate agent in Winnetka, Illinois, and the former Jeannette Husted, a homemaker.

A state champion wrestler and Eagle Scout, Rumsfeld attended Princeton University on scholarship and a Navy ROTC stipend. After receiving his arts degree in political science in 1954, he married his high-school girlfriend, Marion Joyce Pierson. He served three years in the US navy, during which he became a flight instructor.

In 1957, Rumsfeld became a legislative assistant to Ohio congressman David S Dennison. When a Chicago seat in the House of Representatives became vacant in 1962, Rumsfeld ran as a Republican and won. At age 30, he was youngest House member.

Rumsfeld gave up his seat in 1969, when then-president Richard Nixon persuaded him to head the Office of Economic Opportunity, according to his memoir. There, Rumsfeld’s hires included two future defence secretaries, Frank Carlucci and Cheney. Thirty years later as vice-president, Cheney helped bring Rumsfeld out of retirement to lead the Pentagon.

Rumsfeld later served Nixon as a White House counsellor and as ambassador to defence alliance Nato. The post kept him out of Washington for the Watergate debacle that brought down Nixon in 1974.

He returned to Washington in 1974 as Ford’s new chief of staff, and the following year, Ford appointed him defence secretary. Rumsfeld put into production the B-1 bomber, Trident submarine and the MX Missile — weapons that helped define the US military’s posture for decades to come.

With the election of Jimmy Carter as president in 1976, Rumsfeld left politics for business. He became CEO of Skokie, Illinois-based GD Searle & Co, a troubled pharmaceutical company. Rumsfeld masterminded a corporate turnaround and engineered its 1985 merger with Monsanto. He also held top jobs at General Instrument Corporaton and Gilead Sciences, a bioengineering and pharmaceutical company.

Rumsfeld kept his hand in Republican politics. In 1980, he was an also-ran for Ronald Reagan’s vice-presidential mate. In 1988, he made a short-lived presidential bid. He also served briefly as Reagan’s special envoy to the Middle East and journeyed to Baghdad in 1983 to meet Saddam Hussein.

In retirement, Rumsfeld was unapologetic for his role as planner of wars that stretched far longer than intended.

In addition to his memoir, he published in 2012 a book of aphorisms, Rumsfeld’s Rules, that he had collected over decades and once distributed to staff in Ford’s White House. Among these was “Plan for uncertainty”.

Rumsfeld and his wife had three children, Valerie, Marcy, and Nicholas.

In second strike ordered by Biden,  US military targets logistics and weapons facilities in Syria and Iraq
World
2 months ago

Ankara hopes to mend cool relations with the superpower, but a string of issues will need ironing out
World
3 months ago