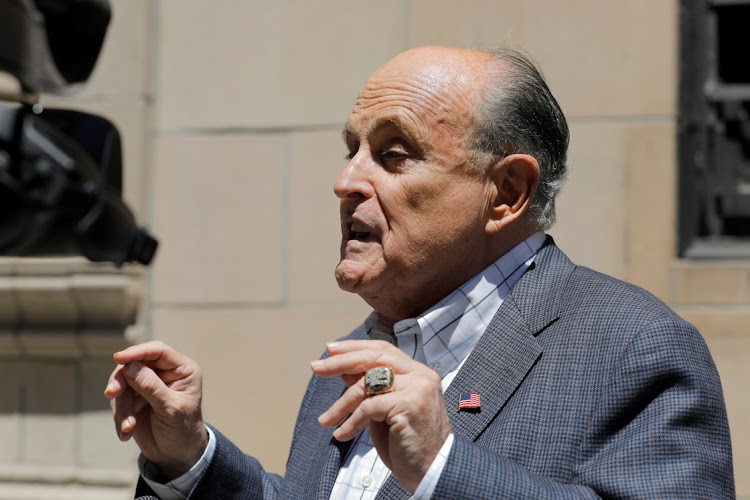 Former New York City mayor Rudy Giuliani speaks to media outside his apartment building after the suspension of his law licence in New York City, New York, the US, June 24 2021. Picture: REUTERS/ANDREW KELLY

New York — Rudy Giuliani has had his law licence suspended  in New York by a state court that said he put the public at risk by spreading lies about the 2020 presidential election.

The false statements were made to bolster the “narrative that due to widespread voter fraud, victory in the 2020 US presidential election was stolen from his client”, then-president Donald Trump, the Manhattan-based appeals court said in an order on Thursday. He was a personal lawyer to Trump.

It’s the latest blow to the 77-year-old former New York mayor, who was admitted to the bar in 1969 and once stood atop the Manhattan legal community as chief federal prosecutor and as a partner at several large law firms. His home and office were raided by the FBI in April as part of a federal criminal investigation.

Giuliani had faced several calls for disbarment after his election-fraud claims and the January 6 Capitol riot. Though suspension is short of disbarment, the court said disciplinary proceedings were ongoing and could lead to further sanctions. But the court said Giuliani’s conduct required an immediate response.

His “conduct immediately threatens the public interest and warrants interim suspension from the practice of law,” the Appellate Division,  said in its 33-page ruling. “This country is being torn apart by continued attacks on the legitimacy of the 2020 election and of our current president, Joseph  Biden.”

John M Leventhal and Barry Kamins, Giuliani’s lawyers, said they believed he would be cleared once a hearing was held.

“This is unprecedented as we believe that our client does not pose a present danger to the public interest,” the lawyers, both former New York state judges, said in a statement. “We believe that once the issues are fully explored at a hearing Mr Giuliani will be reinstated as a valued member of the legal profession that he has served so well in his many capacities for so many years.”

The suspension comes at a time when Giuliani is being investigated by the Manhattan US attorney’s office, which he led in the 1980s, for possibly illegally lobbying the Trump administration on behalf of Ukrainian interests who sought the ouster of then-US ambassador Marie Yovanovitch.

Federal Bureau of Investigation agents conducted April 28 raids on his home and office pursuant to warrants from that probe, seizing his personal electronic devices.

Giuliani, who openly sought information in Ukraine that could damage Biden in the run-up to the 2020 election, has denied acting for anyone in that county, saying he was only representing Trump as a lawyer.

The appeals court that suspended Giuliani rejected his argument that his statements were merely opinions and the disciplinary action violated his free-speech rights. The panel cited false statements of the fact made by Giuliani, including his claim that Pennsylvania processed more absentee ballots for the election than it sent out.

“This factual statement regarding the number of ballots mailed out before the election was simply untrue,” the panel said. “The true facts are that 3.08-million absentee ballots were mailed out before the general election, which more than accounted for the over 2.5-million mail-in ballots that were actually tallied.”

Giuliani “repeatedly advanced false statements that there were 600,000 to 700,000 fabricated mail-in ballots, which were never sent to voters in advance of the election”, the court said.

The court said the suspension will remain in place until disciplinary matters have been concluded and another issue is ordered. As part of the suspension, Giuliani is not only prevented from appearing in a court as an attorney, he also can’t give anyone “an opinion as to the law or its application”.

Ronald C Minkoff, who in January submitted one of several complaints against Giuliani to the New York attorney grievance committee on behalf of several lawyers’ groups and attorneys, called the ruling a “once-in-a-generation decision”.

It’s “hugely important” for the profession because it says that lawyers have to act honestly at all times, “perhaps especially in matters of great political import”, said Minkoff, who is chair of Frankfurt Kurnit Klein & Selz’s professional responsibility group in New York.

New York University legal ethics professor Stephen Gillers said the imposition of an interim suspension on Giuliani for lying to the public was “unique”. Such suspensions are usually only applied to lawyers who’ve been found to be cheating their clients, he said.

Trump slammed the decision, calling Giuliani a “great American patriot” who is fighting what the ex-president falsely says was “fraudulent election”.

“The greatest mayor in the history of New York City, the Eliot Ness of his generation, one of the greatest crime fighters our country has ever known, and this is what the Radical Left does to him,” Trump said in a statement.

The suspension is a striking development for a lawyer of Giuliani’s prominence. Before he was elected mayor in 1993, Giuliani was famous as the hard-charging Manhattan US attorney who prosecuted 1980s insider traders such as Ivan Boesky and Michael Milken and went after the heads of all five New York mafia families in the famous “Commission Trial”. He had been US associate attorney-general, the number-three figure in the justice department, before that.

His leadership of the city during the September 11 2001, terrorist attacks made him “America’s mayor” and made him hot commodity in the legal profession. In 2005, he made a lucrative deal with the Texas law firm Bracewell, which adopted the name Bracewell & Giuliani until he left in 2016.

Giuliani’s growing association with Trump estranged him further from the legal community though. He resigned from his last major firm, Greenberg Traurig, in 2018 to focus on his work for Trump during the investigation by special counsel Robert Mueller.

He made his first court appearance in decades on Trump’s behalf, pushing voter-fraud claims to try to convince a federal judge in Pennsylvania to set aside the state’s election results in favour of Biden. US district judge Matthew Brann subsequently issued one of the most stinging rebukes to the Trump team’s claims.

“This court has been presented with strained legal arguments without merit and speculative accusations, unpled in the operative complaint and unsupported by evidence,” Brann wrote. “In the USA, this cannot justify the disenfranchisement of a single voter, let alone all the voters of its sixth most populated state. Our people, laws, and institutions demand more.”

Trump and Giuliani sued over violence in US Capitol riot

Trump and Giuliani sued over violence in US Capitol riot