Governor Greg Abbott says law, which also does away with background checks and firearm training, turns Texas into a ‘second amendment sanctuary’ 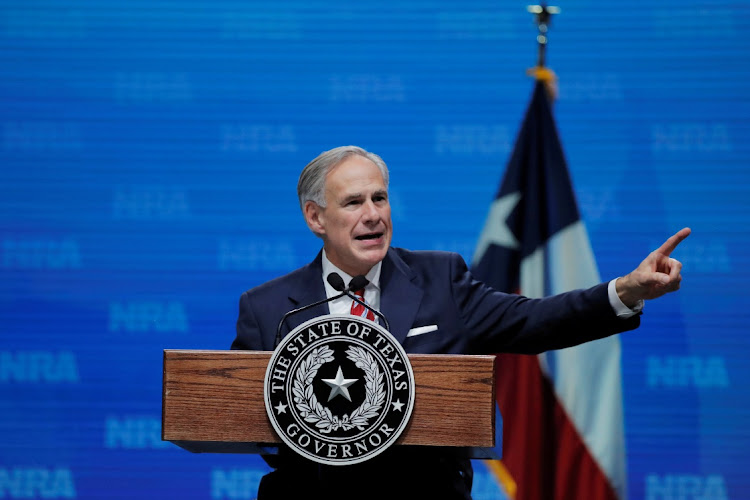 Texas governor Greg Abbott speaks at a convention in Dallas, Texas, the US, May 4 2018. Picture: REUTERS/LUCAS JACKSON

Lubbock —  The governor of Texas has signed into law a bill allowing people to carry concealed handguns without any permit, joining 20 other states that already have such measures.

Governor Greg Abbott touted the law as part of a package that he said turns Texas into a “second amendment sanctuary” where any new federal gun restrictions will not be enforced.

Abbott was holding a ceremonial signing of the bill on Thursday, but had already signed the bill into law on Wednesday, according to the Texas legislature website, as first reported by the Texas Tribune. The law goes into effect on September 1.

The Texas law is the latest in a back-and-forth battle at the state level between those who support stricter gun laws and those who want to strip away most barriers to owning a gun.

Gun violence killed 38,707 people in the US in 2019, the most recent year for complete statistics, according to the Centers for Disease Control and Prevention (CDC) — far higher than any other developed nation.

Representative Matt Schaefer, a Republican who authored the bill, which gun rights advocates call a “constitutional carry” law, said in a written statement that the law defends the Second Amendment of the US Constitution, which protects the right to bear arms, and restores all law-abiding Texans’ rights to carry guns.

Kevin Lawrence, executive director of the Texas Municipal Police Association, the largest group representing officers in the state, said the law will be a tremendous burden for police on the street.

“We were opposed to this bill from the very get-go,” Lawrence said.

“We've shifted the burden to the cops on the street, and made it a lot more difficult for them,” Lawrence said.

He added that police much preferred an administrative vetting process that determines who can carry a gun, “rather than a cop having to figure that out at 3am on the south side of Lubbock”.

Previously, if a person in Texas wanted to carry a concealed weapon, they had to go through a background check and undergo four to six hours of training on gun laws, conflict de-escalation and live-fire training, before obtaining the licence.

Everytown for Gun Safety, an advocacy group that works for tougher gun regulations across the US, sharply criticised the move, saying it would add to the number of gun deaths in Texas. The group, which spends millions of dollars on political races across the country, vowed to target politicians in Texas who supported the measure.

Last week, Abbott said Texas would start building its own wall along the Mexican border. He also  launched an aggressive campaign to arrest immigrants and asylum seekers. The moves may result in another clash with the Biden administration over immigration.

This is unlikely to change as small, rural states where gun ownership is widespread have disproportionate influence in the US Senate
World
3 months ago

Alleged attacker, who was an employee of San Jose’s transit service, died at the scene
World
2 months ago

Police were responding to traffic congestion reports when shots were heard, a spokesperson says
World
3 months ago

A 17-year old high school student, who opened fire at a Tennessee high school, was shot dead on Monday during a confrontation with police
World
3 months ago
Next Article