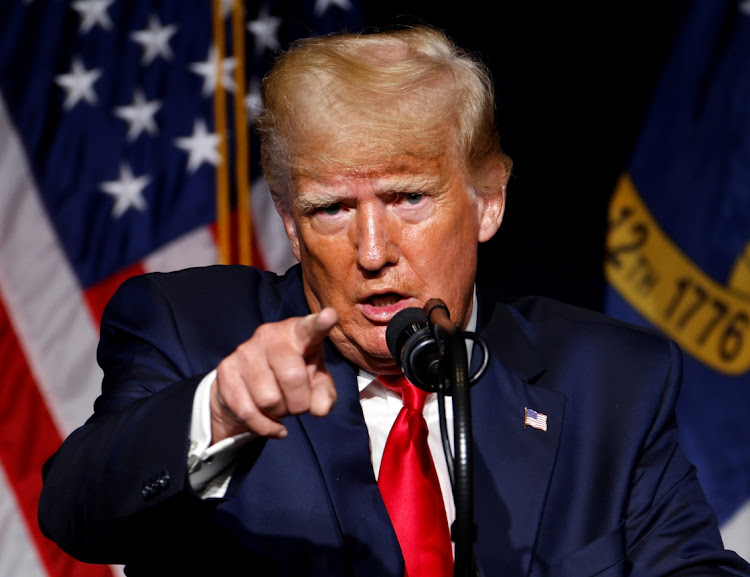 Former US President Donald Trump points at the media while speaking at the North Carolina GOP convention dinner in Greenville, North Carolina, the US, June 5 2021. Picture: REUTERS/JONATHAN DRAKE

Columbus, Ohio — Donald Trump began his public re-emergence with a rambling speech in which he aired long-standing grievances, highlighted his actions as president, and decried President Joe Biden and Democrats for undoing them.

The former president spoke for about 90 minutes at the North Carolina Republican Party’s convention in Greenville on Saturday night. He’s expected to restart campaign-style rallies this northern hemisphere summer, as Republicans look to regain control of Congress in 2022’s midterm elections, and continues to hold out the prospect of running for the White House again in 2024.

“Our movement is far from over,” Trump said. “In fact, it is just getting started.”

Trump had barely begun his critique of the Biden administration when he called his daughter-in-law, Lara Trump, to the stage. She announced she’s not running for an open US Senate seat in North Carolina, her home state, in 2022.

Trump then tried out his king-making role by endorsing one of several Republicans seeking the seat being vacated by three-term incumbent senator Richard Burr, opting for US representative Ted Budd.

The former president drew standing ovations from the crowd of about 1,250 as he called for a ban on the teaching of “critical race theory” in schools, accused Biden and Democrats of “destroying our country”, criticised infectious diseases expect Anthony Fauci, and demanded that China pay $10-trillion in reparations for its role in the coronavirus pandemic.

Trump repeated his false contention that the 2020 election was stolen through fraud, and praised the efforts in Arizona and elsewhere to audit the results of the November vote. He also called investigations by New York prosecutors into his real estate company “prosecutorial misconduct”.

Trump’s speeches are providing his biggest platform since leaving office on January 20 because he was banned by most social-media companies for his posts that seemed to encourage the January 6 insurrection at the US Capitol.

The former president is supporting candidates loyal to him and his agenda, as well as those challenging the few Republican legislators who backed his second impeachment. That’s worried some Republican leaders that Trump will hurt the party’s efforts to retake control of Congress in the 2022 midterm elections.

But Trump said relitigating the past election was necessary for voters to have the confidence to participate in 2022.

“Without going back, you’re not going to go forward,” he said.

Bid to flog hotel lease a test for tarnished Trump

Various probes have been launched, but it is hard to keep partisan politics out of them
Opinion
4 months ago
Next Article