It's possible and necessary to improve the Brazilian agribusiness industry while preserving the environment, a study finds 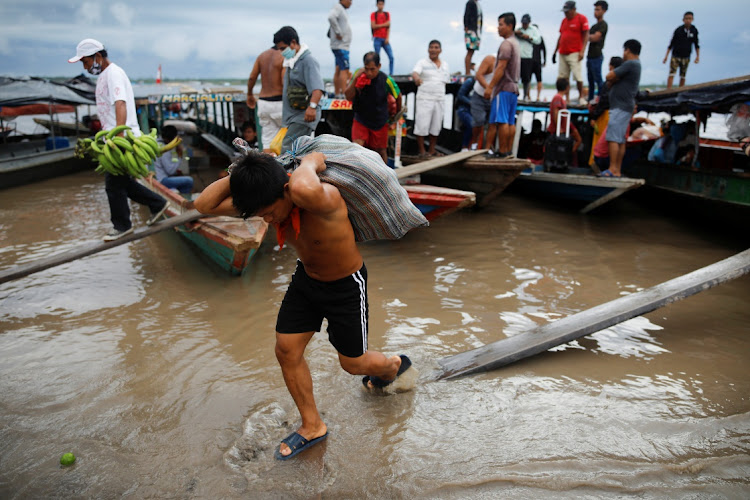 A merchant unloads cargo on the shore of the Ucayali River in an area of the Amazonian rainforest in Pucallpa, Peru. File photo: REUTERS/SEBASTIAN CASTANEDA

Brasilia — Brazilian agribusiness is losing up to $1bn a year as rising deforestation cuts rainfall in the southern Amazon — a problem set to expand if forest loss continues, a group of Brazilian and German researchers have warned.

In a study published in the journal Nature Communications in May, they found that smaller-scale forest losses can enhance rainfall on adjoining agricultural land — but once losses pass 55-60%, rainfall plunges.

Losses of tree cover in particular seem to delay the start and shorten the length of the rainy season, they found.

Brazil is the world’s top soybean producer, and its second largest producer of beef, as well as the globe's biggest beef exporter.

In parts of the country, Brazil's farmers are already battling unusually dry weather this year, with government agencies warning in late May of drought threats as the country faces its worst dry spell in 91 years.

The new study looked at rainfall changes between 1999 and 2019 in the southern Brazilian Amazon, a 1.9m sq km area that has so far lost about a third of its forests, as a model for future rainfall shifts.

Researchers predicted what might happen through 2050 under continued weakening of Brazil's conservation policies and strong political support for agricultural expansion compared to effective enforcement of forest protection laws.

Co-author Britaldo Soares told the Thomson Reuters Foundation that the difference was stark.

Unless Brazil's government quickly shifts its pro-development policies, which favour economic growth over conservation, agribusinesses could become victims of the measures many of them support.

The effect would be like “shooting yourself in the foot,” said Soares, who is project coordinator for the Centre for Remote Sensing at the Federal University of Minas Gerais (UFMG).

Environmentalists say President Jair Bolsonaro's policies have weakened conservation efforts and his rhetoric has emboldened illegal ranchers, loggers and land speculators to cut down the Amazon forest to expand their business.

Bolsonaro's office did not respond to a request for comment.

Amazon forest losses have soared to a 12-year high since Bolsonaro took office in 2019, with deforestation rising 43% in April compared to the same month a year ago, according to government data published in May.

Removing trees to plant crops and raise cattle reduces the forest's ability to trap and store planet-heating carbon dioxide in the atmosphere, and can contribute to emissions if forests are burned.

But more fragmented forest, as losses grow, also is less able to produce the same volume of water vapour that rises to become rain, and can make the forest drier and more vulnerable to burning.

Less rainfall can mean lower yields and force farmers in the southern Amazon and beyond to adapt by moving to new areas or growing more drought-resistant crops, the study noted.

It did not discuss prospects for irrigating crops in the region.

Farmers in the Amazon also commonly profit from double-cropping, or growing at least two crops per year.

But that could become more difficult or impossible if continuing tree losses cause rainy seasons to become delayed and shorter, the study noted.

Researchers said that if Brazil's government fails to act against deforestation, international responses — including potential sanctions and exclusion of Brazil from international treaties — could also result in lost revenue for Brazil's farm-related businesses.

Stopping forest loss in the Amazon is vital not only to protect biodiversity and the global climate but to protect agribusiness itself, they said.

As part of their study, the researchers used mathematical modelling to predict the economic losses that southern Amazonian agribusiness is expected to suffer if current policies continue and rainfall in the Amazon keeps dropping.

By 2050, the beef industry could lose more than $180bn and the soy industry up to $5.6bn in total due to the effects of decreased rainfall, the study found.

Soares said for long-term economic prosperity the Amazon region needed to find a more sustainable economic model not reliant on land-hungry commodities such as soy and beef whose expansion were leading to major forest loss.

A study he and other researchers carried out in 2018 found landowners could potentially earn more than $700 per hectare each year in international payments to keep climate-stabilising forests standing as well as by created processed products from forest species such as Brazil nuts.

Cattle ranching on deforested land, by comparison, earns a landowner about $40 per hectare each year, it noted.

As well, other nations need to put more pressure on the current Brazilian government to boost forest conservation, said Paulo Barreto, a researcher who has studied the Amazon for three decades and works at the non-profit research institute Imazon.

That should include “immediate and concrete measures” such as refusing to purchase beef, soy or other products from deforested land, he said.

Argemiro Teixeira, one of the study's co-authors and an environmental systems modeller, said profitable agriculture and forest protection in the Amazon did not have to be at odds.

Agribusiness can be profitable without continued expansion at the expense of the forest, he noted, calling it “possible and necessary to improve the industry while preserving the environment.”

Not only will this create jobs and grow economies, but the region could help in the global fight against climate change
Opinion
3 weeks ago

Norway has paid $1.2bn into the Amazon Fund so far, but under President Jair Bolsonaro, rainforest destruction has surged
World
2 months ago
Next Article