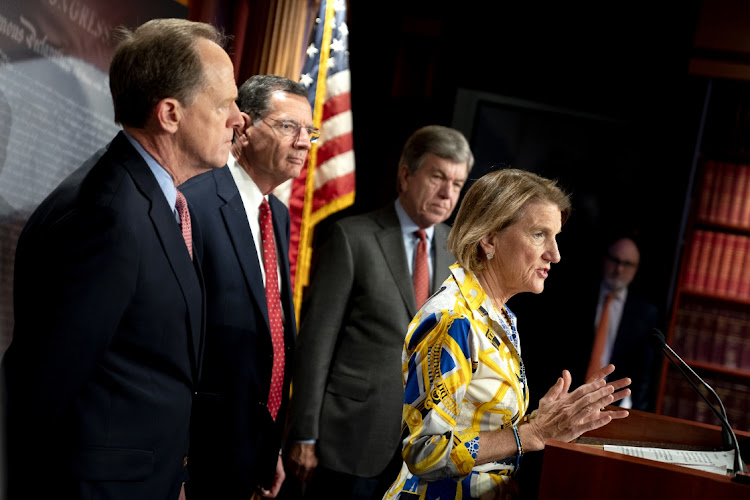 From left, senator Pat Toomey, senator John Barrasso and senator Roy Blunt listen as senator Shelley Moore Capito speaks during a news conference at the US Capitol in Washington, DC, the US, May 27 2021. Picture: STEFANI REYNOLDS/BLOOMBERG

The plan, from a group of six Republicans led by senator Shelley Moore Capito, represents their counter-offer to a week-old $1.7-trillion White House proposal that slashed more than $500bn from Biden’s original $2.25-trillion plan in a bid to reach a bipartisan agreement.

“Senate Republicans continue to negotiate in good faith,” Capito told a news conference, where she was flanked by members of her negotiating team. “There is a real hunger for bipartisanship in the US Senate.”

The Republican proposal includes $506bn for roads, bridges and major projects, with another $98bn allocated to public transit. Just $257bn of the funds represented an increase over existing spending plans.

Republicans proposed using funds previously authorised for Covid-19 relief to fill a $575bn gap between expected revenue from the US Highway Trust Fund and the offer’s $928bn top line.

Senator Roy Blunt said Republicans are willing to consider other means of paying for the plan, including a fee on electric vehicles and nearly $350bn in “public-private” investments identified by business leaders.

A Biden administration official said on Thursday the White House was considering the offer seriously.

But at a news conference on Wednesday, deputy press secretary Karine Jean-Pierre had rejected the idea of repurposing already authorised Covid-19 funding for infrastructure.

“We should also be clear that there are simply not hundreds of billions of dollars in Covid-19-relief funds available to repurpose,” Jean-Pierre said.

Senator Pat Toomey rejected that argument at Thursday’s press conference: “Repurposing these funds needs to be a really important part of how we fill this gap ... there’s more than we need.”

Biden has imposed an unofficial end-of-May deadline on the negotiations, and some Senate Democrats have been pushing to go it alone if Republicans do not reach an agreement soon.

Capito warned that any decision to move forward on a Democratic infrastructure plan without Republican support could have consequences for legislation down the road. “A partisan reconciliation process would be destructive to our future bipartisan attempts,” the West Virginia Republican said.

The White House has expressed willingness to negotiate on some of the finer details but has said it wants a large package that expands the definition of infrastructure to include items such as free community college and paid family leave.

To pay for it, the administration has said it is open to any ideas as long as they don't include asking Americans earning less than $400,000 to pick up the bill.

US Republican senators on Thursday unveiled a $928bn infrastructure blueprint as a counter-offer to Biden’s latest $1.7-trillion package proposal.

Republicans initially proposed a $568bn, five-year plan and increased the top line to about $800bn over eight years when the two sides met on Capitol Hill on May 18, according to the legislators.

The proposal still leaves the two sides hundreds of billions of dollars apart, with no agreement on the scope of a package or how to pay for it.

Republicans want the package limited to roads, bridges, airports, waterways and broadband access. The group rejected the White House's $1.7-trillion offer, saying it still contained social spending provisions and tax hikes on US corporations that they have opposed.

Joe Biden’s policing bill still being negotiated but not imminent

The US president promised a bill within the one-year anniversary of George Floyd’s murder, but civil rights groups are more interested in a ...
World
3 weeks ago

Vineyard Wind’s $2.8bn installation of up to 84 turbines off the East Coast may face legal challenges from fishing groups and others
World
1 month ago
Next Article