Alleged attacker, who was an employee of San Jose’s transit service, died at the scene 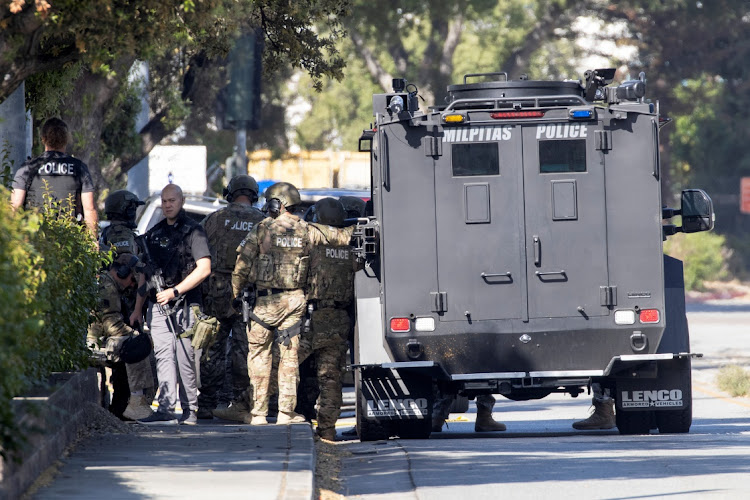 Police secure the scene of a mass shooting at a rail yard in San Jose, California, the US, May 26 2021. Picture: REUTERS/PETER DASILVA

Davis said he could not say how the gunman died or whether police officers fired their weapons at the scene.

The shooting took place just before 7am at a light rail yard run by the VTA near the city's main airport. A bomb squad was searching the yard after “at least one” explosive device was found, Davis said.

“A horrible tragedy has happened today and our thoughts and love go out to the VTA family,” Glenn Hendricks, the chair of the VTA board, said at the news conference.

He said the shooting took place in a part of the yard where workers do maintenance on vehicles, and was not in the yard's operations and control centre.

San Jose, a city with about 1-million residents, lies at the heart of Silicon Valley, a global centre of technological innovation and home of some of the US’s biggest tech companies.

“We are in a very dark moment,” San Jose mayor Sam Liccardo said at the news conference. “We will do everything possible to ensure this never happens again in our city.”

The Federal Bureau of Investigation said it had agents assisting at the crime scene.

Mass shootings are common in the US, which has one of the highest rates of gun ownership in the world.

President Joe Biden has declared: “This has to end. It’s a national embarrassment,” before calling on Congress to ban assault weapons and large-capacity ammunition magazines.

In April, five people were hospitalised after being shot and injured in Shreveport, Louisiana and three people died in a shooting at an apartment complex in Austin, Texas.

In March, eight people, including six women of Asian descent, were shot dead in a string of attacks at day spas in and around Atlanta, and less than a week later, 10 people were killed at a supermarket in Boulder, Colorado.

Police were responding to traffic congestion reports when shots were heard, a spokesperson says
World
1 month ago

A 17-year old high school student, who opened fire at a Tennessee high school, was shot dead on Monday during a confrontation with police
World
1 month ago

US president announces broader registration requirements, including for 'ghost guns' and pistols, to end 'epidemic' of gun violence
World
2 months ago
Next Article