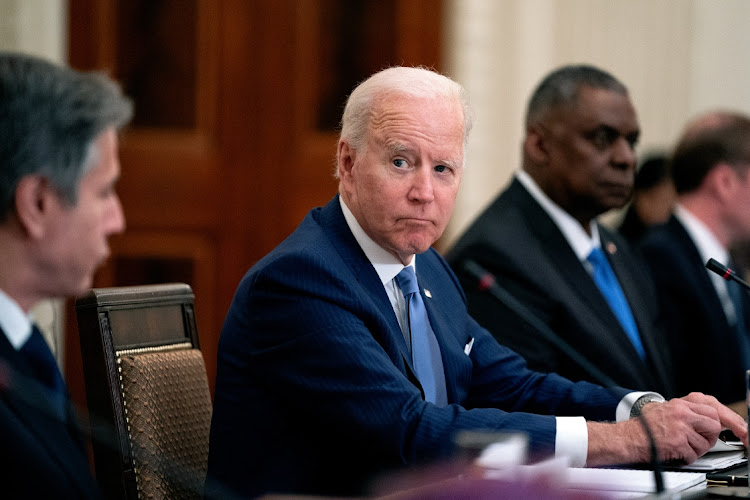 Washington — Weeks after US President Joe Biden pitched the first major set of tax increases since 1993, signs are mounting that anxiety among congressional Democrats will significantly temper any increases that manage to pass Congress.

“We are trying to identify a menu of options” that can pass, Senator Chris van Hollen of Maryland said in an interview. “You need to get every one of your 50 Democratic senators on board. There is no room for error.”

The treasury department is slated to release the administration’s most detailed tax proposals yet, in a report known as the Green Book. But congressional staff are already paring down the ideas that have been floated and fine-tuning them to make them workable from both policy and political standpoints, a Democratic aide said on condition of anonymity.

With the economic recovery still leaving more than eight-million Americans without jobs compared with before the coronavirus pandemic, some Democrats are wary of criticism that higher taxes could damage growth. Moderate Democrats in the House — vital to holding the party’s slim majority in 2022’s elections — are well aware of Republicans’ success in tarring the Obama administration’s spending and tax plans in the 2010 midterm elections.

Biden’s proposal to increase the corporate tax to 28% from 21% hit a roadblock early on, with moderate Democratic Senator Joe Manchin of West Virginia saying he preferred 25%. Another element — a dramatic hike in the capital gains tax, especially for the wealthy at the time they inherit assets — has recently been subject to potential easing, with the staff of House ways and means committee Richard Neal floating options, Bloomberg News has reported, has reported.

At the same time, a group of lawmakers from high-tax states are demanding greater relief for some taxpayers, whose state and local tax deductions were capped in the Republican tax overhaul of 2017.

Months of negotiations are likely, not least because lawmakers need to determine how much new spending has to be funded from the tax measures. Talks on a bipartisan infrastructure deal showed no progress Friday, increasing the likelihood of a Democrat-only push for Biden’s $4-trillion in spending and tax proposals.

Neal, whose committee is in charge of drafting tax legislation, said he’s been inundated with ideas from colleagues about how to craft a package, and said he intends to move quickly. Yet he’s mindful of what can get through the 50-50 Senate.

“As closely as we can align ourselves with Senate thinking and administration thinking, the better off we are going to be,” Neal said in an interview. “That’s why I’ve been so deliberative about not thinking out loud about tax policy. I’ve been very guarded on it and I’m going to stay that way” until a consensus is reached among Democrats and on the panel, he said.

These machinations showcase the challenges the White House faces to finance the president’s sweeping legislative proposals on infrastructure and social spending.

White House aides and Democrats are continuing to make the case with the public, while assessing what is politically possible on Capitol Hill. Biden aides frequently cite nonpartisan polling from CBS News, Monmouth, Morning Consult and ABC/Washington Post, which shows a majority of Americans support raising taxes on the rich or corporations. But there is no guarantee this level of public support will translate into Democratic legislators voting for a raft of tax increases ahead the 2022 midterms.

One Democratic operative who has worked with both the White House and legislators highlighted that many of the party’s lawmakers remember the 2010 elections, during which nascent Tea Party Republicans pummeled them for passing the Affordable Care Act and its accompanying tax increases. Democrats lost the House that November.

Representative Josh Gottheimer, a New Jersey Democrat who co-chairs the bipartisan problem solvers caucus, has cautioned that there is little enthusiasm for tax increases among moderates. Gottheimer is also leading a charge to balance out some of the hikes with a more generous state and local tax, or Salt, deduction that had been limited under President Donald Trump.

Progressives in turn have become frustrated with the moderates, arguing that the coming year is the party’s best chance to roll back the Trump tax cuts and use that money to fund spending on items including child care, community college and universal preschool.

“The tax increases, in a way, are the most popular parts of the proposal,” said Chuck Marr, who served as an economic policy adviser to former Senate majority leader Tom Daschle, and now works for the left-leaning Center on Budget and Policy Priorities. “The public is so there.”

“It’s critical that Democrats do all we can with this opportunity to make real progress for the American people,” said Senate finance committee chair Ron Wyden. “While conversations about infrastructure are ongoing, it’s critically important that we move forward.”

Neal, a Massachusetts Democrat, said he soon plans to schedule public hearings from stakeholders who would be affected by Biden’s infrastructure and tax proposals. Among the target groups are the AFL-CIO labour group, the US Chamber of Commerce, the American Trucking Associations and the Teamsters union.

“I think they may get the broad support at the end of the day,” said Ben LaBolt, who worked in the Obama White House and remains close to several Biden aides. “If you are someone like Manchin, if this can be the ticket to getting a bunch of middle class union jobs in West Virginia that don’t require a four-year, or even two-year degree, this could have a major impact on the state.”

By undoing the successes of his predecessor, the US president has created chaos on the Mexican border
Opinion
1 month ago