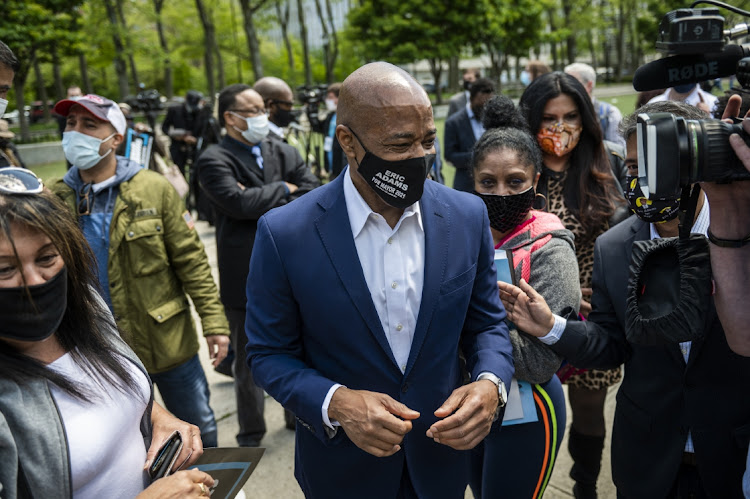 New York City is gearing up for the last month of a mayoral race that is coinciding with a spike of gun violence the city hasn’t seen in decades, including a 166% increase in shootings in April from a year before and a shooting in Times Square that’s rocked the city.

It’s also hitting as the broader US grapples with a spate of shootings that President Joe Biden has called a “national embarrassment”. The impact is upending the race for the mayor of the most populous US city and elevating Brooklyn borough president and mayoral hopeful Eric Adams, a former policeman.

After initially making his mark as a police reformer, Adams is campaigning on a violence crackdown against the orthodoxy of Democratic Party and criminologists who have been trying for decades to address the overall causes of violence, rather than just adding more police officers.

The issues playing out in New York City are sure to influence cities across the US experiencing similar spikes in crime, said Robert Shapiro, a Columbia University political scientist. “Any time the political discourse turns towards law and order nationally, Democrats tend to lose influence,” he said.

Homicides increased nearly 30% in 34 major US cities in 2020 from a year ago, surpassing the previous largest single-year increase of 12.7% in 1968, according the National Commission on Covid-19 and Criminal Justice in a study financed by Arnold Ventures, a philanthropy.

The political debate has also pivoted to focus on the role of policing after three visitors to Times Square were wounded as bystanders to a shooting in broad daylight, including a four-year-old. Candidates decried the violence and offered plans to redeploy police and modify gun-suppression tactics.

“Crime is going to become The Issue in the city as the pandemic’s impact recedes and people return to offices, ride the subways,” said George Fontas, a government affairs consultant. The first signs came in a January poll Fontas commissioned, conducted by New York-based Core Decision Analytics. It found crime and public safety to be voters’ most important concern, after getting the spread of Covid-19 under control and regaining the city’s economic footing.

This shift has put a spotlight on Adams, a 22-year New York Police Department (NYPD) veteran who retired as a captain. Adams has made law and order a focus of his campaign ahead of the June 22 Democratic primary. Because New York City is so heavily Democratic, the winner of that primary will be heavily favoured to be the next mayor.

Adams recently pulled ahead to first place in a late-April survey by GQR, becoming the first candidate to outperform former presidential candidate Andrew Yang, who has the highest name recognition.

“Adams has an opportunity to appeal to voters in minority communities concerned about public safety issues whose first reaction might be the city needs more cops and better policing to solve the problem,” Fontas said.

However, for all his law enforcement experience, Adams’s focus on police tactics instead of non-police crime-fighting strategies could prove risky. His insistence that stop-and-frisk encounters can be “an effective tool” provokes scorn among activists, whose rebellion led to the eventual repudiation of the practice.

“The root cause of gun violence isn’t something that Eric Adams or the NYPD can control,” said Kirsten John Foy, a church pastor and founder of The Arc of Justice, a civil-rights group. “It’s about eliminating abject poverty and creating conditions in these neighbourhoods that offer young people a full range of options and opportunity.”

Activists also reject Adams’s call for a plainclothes “gun-suppression” unit, which for some sounds too similar to the aggressive street-crime unit deployments, which, before they were disbanded, accounted for a disproportionate percentage of abuse complaints.

A quarter of Thursday night’s two-hour televised mayoral debate was spent on the topic of policing. Moderator Errol Louis asked for a show of hands among the eight top Democratic contenders as to who would be willing to send more cops into the subway. Only city comptroller Scott Stringer, civil-rights lawyer Maya Wiley and non-profit executive Dianne Morales did not raise their hands. Wiley said: “We need mental health professionals.”

The morning after the debate, police said two men stabbed several commuters in Manhattan subway stations in a matter of hours. In a media conference on Friday, Stringer said: “The rush to send thousands of police officers into the subway system with no plan makes no sense.” New York City’s transit system resumed 24-hour service on Monday after a year of overnight closures because of the need to combat Covid-19.

Increasing police presence will have no effect on shootings in neighbourhoods characterised by economic and social deprivation, said Erica Ford, founder of Life Camp. The community-based “cure violence” group views the shootings instead as a public health problem.

“If you go back to the old playbook it won’t produce a return to the days of low crime,” said Arnold Ventures vice-president Jeremy Travis, who for 13 years served as president of John Jay College of Criminal Justice, a division of City University of New York. “The key here is to make the right diagnosis as to what’s causing the increase, and then act after understanding how deep the pandemic’s disruption goes, and with it the lack of opportunity young people experience in these neighbourhoods.”

The violence is caused by a relatively small number of people in a small number of neighbourhoods, said Richard Aborn, president of the Citizens Crime Commission, a business-supported non-profit that supports and monitors the performance of law enforcement agencies. The winning political message, Aborn said, is one that will credibly combine innovative policing with increased community investment and involvement.

“What you’re going to see emerge is a much more comprehensive approach to fighting crime,” Aborn said. “Involvement by the community is good, but we’re not going to see the end of police.”