One analyst says the inflation hype is a red herring, and comes up every time a Democrat president is in charge 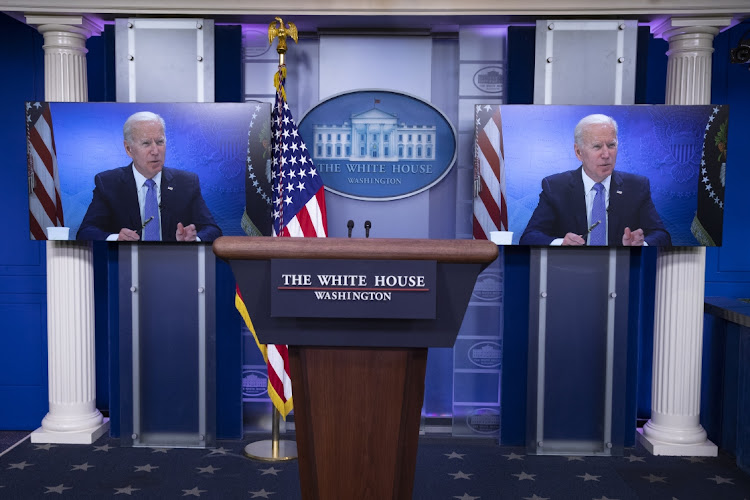 US President Joe Biden in a virtual meeting at the White House on May 11 2021. Picture: BLOOMBERG/EPA MICHAEL REYNOLDS

Biden’s Republican opponents have begun seizing on rising prices, the slower-than-expected pace of hiring and even growing fuel shortages after a cyberattack on Colonial Pipeline to compare his administration with the “stagflation” era of former president Jimmy Carter. The spectre of hours-long waits in lines to fill up with petrol has only enhanced the parallel.

“There’s so much money in the economy that the demand is high, and it’s out pacing supply and it’s starting to push prices up,” Republican senator John Thune said. “We need to be a little more cautious and restrained.”

The GOP criticism has helped put a spotlight on a monthly report on inflation due on Wednesday. Another large year-over-year increase may fan anxiety in Biden’s own party and among lawmakers about his plans to spend some $4-trillion to remake the US economy.

The consumer price index already climbed 2.6% in March from a year before, and is forecast to have gone even higher in April — though depressed levels back when the pandemic struck have distorted the readings.

The latest economic trends, if sustained, pose a threat to an administration that just two months ago was able to trumpet rapidly rising vaccination rates, strengthening job gains and a major victory in the enactment of the $1.9-trillion pandemic-relief bill.

Now, surging prices, along with some evidence suggesting that generous federal benefits may be impeding job openings getting filled, could hurt Biden’s case for his infrastructure-led American jobs plan and social programme-focused American families plan.

White House aides say Republican concerns about the economy are overblown, insisting that any significant inflation spurt this year will be temporary as the economy rights itself after more than 12 months of the pandemic.

Current job growth is hardly anaemic and likely to accelerate in the coming months, accompanied by rising wages. Aides are closely watching a potential increase in prices in areas such as the travel sector and household goods as places where demand may outstrip supply and prices could rise.

The US Federal Reserve has said it sees no risk of broad or sustained inflation. Democrats are pushing ahead with Biden’s plans, with a news conference set for Wednesday at the Capitol, where House speaker Nancy Pelosi and other party leaders will highlight the need for nationwide infrastructure investment.

“The problem most of the inflationists have is that they have cried wolf too many times,” said Austan Goolsbee, former chair of the council of economic advisers under former president Barack Obama, who now teaches economics at the University of Chicago’s Booth School of Business.

“They have predicted major inflation for 13 consecutive years from the Fed’s actions, from the stimulus, from anything that happens when a Democrat is the president,” he said. “Yet in all that time there has been no sustained inflation even when unemployment was 3.5%. Seems more like Republicans throwing up arguments to try to stop Biden’s agenda than about inflation.”

The GOP has seized on rising costs for petrol, lumber, semiconductors and other goods as evidence of a potential inflation spike — and cause to water down, or altogether halt, Biden’s sweeping spending plans.

The majority of independent economists say they expect any rise in inflation to ultimately be temporary. Inflation has not been much of a problem for the past three decades, despite talk of hyperinflation when Obama took office in 2009, following a global recession.

Senate minority leader Mitch McConnell has decried the $1.9-trillion Covid-19 relief package Biden signed in March, which extended a $300 a week jobless-benefit bonus to September. McConnell said virtually all the employers he spoke with in Kentucky last week told him they are having a hard time finding workers with Washington paying “a bonus to stay unemployed”.

“We should not still be taxing the Americans who are working to fund continued extra benefits for those staying home,” he said.

Biden aides argue that the pandemic and lack of childcare is the main cause of the slow return to employment. The president’s allies say proposed spending in the infrastructure and families proposals is spread over several years — meaning the cash will not all flood into the economy quickly. Biden also says all his proposed spending is offset by tax increases, so the proposed packages pay for themselves.

Such arguments may not matter if Republicans can capitalise on rising prices on necessities such as petrol and groceries to cast doubt on Biden’s new economic plans. Far more worrisome to the White House is the risk that Republicans’ arguments will keep moderate Democrats such as senator Joe Manchin of West Virginia from supporting Biden’s plans.

“The highest inflation numbers are just ahead of us,” the chief economist for Goldman Sachs Group’s Jan Hatzius told Bloomberg Television in an interview on Tuesday. “I do think, though, that ultimately it’s going to be more temporary.”