Cheney’s ouster almost a given as Trump voices contempt 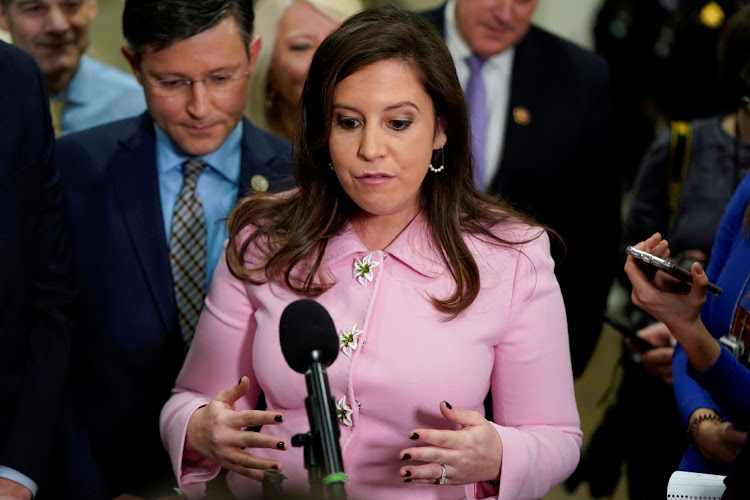 Donald Trump’s grip on the GOP will tighten with a vote by House Republicans on Wednesday to depose representative Liz Cheney from her leadership post for her persistent rebuttals to Trump’s false claims that the 2020 election was stolen from him.

The outcome of the closed-door vote of the 212-member Republican conference is largely settled. House GOP leader Kevin McCarthy and his chief deputy, representative Steve Scalise of Louisiana, are publicly supporting Cheney’s ouster and her replacement with New York representative Elise Stefanik, a Trump loyalist. The former president also is backing Stefanik.

Cheney, a Wyoming conservative and daughter of former vice-president Dick Cheney, has not campaigned to keep her job as conference chair, but her spokesperson said in a text message on Tuesday night that she will not step down before the House Republican meeting. She warned anew in a House floor speech on Tuesday that the GOP’s embrace of Trump and his repeated unfounded election claims is damaging the party and the country.

“Remaining silent and ignoring the lie emboldens the liar,” Cheney said. “I will not participate in that. I will not sit back and watch in silence while others lead our party down a path that abandons the rule of law and joins the former president’s crusade to undermine our democracy.”

The House Republican vote, which is set to take place at a private meeting, underscores internal fissures created by Trump and his determination to exercise control over the GOP as it charts a path to recapture control of Congress in the 2022 midterms and the White House in 2024.

Cheney was one of 10 House Republicans who voted to impeach Trump over his role in encouraging the violent mob that stormed the Capitol on January 6. She survived one attempt to remove her after that vote, but she has continued to criticise Trump and assail his repeated false election claims.

“The electoral college has voted; more than 60 state and federal courts, including multiple judges the former president appointed, have rejected his claims,” she said on Tuesday evening on the House floor. “Those who refuse to accept the rulings of our courts are at war with the constitution.”

McCarthy and others insist the party remains a “big tent”, and that lawmakers are able to speak freely and debate issues. But they also argue that the party’s leadership team should reflect rank-and-file sentiment and not be a distraction from party goals.

“The problem is you can’t have a Republican conference chair who continually recites Democrat talking points,” said representative Jim Jordan of Ohio, an outspoken Trump booster.

Trump, who had long been critical of Cheney despite her solid conservative voting record, has kept up a drumbeat against her and on behalf of Stefanik, who was a staunch defender during his impeachment trials.

“The House GOP has a massive opportunity to upgrade this week from warmonger Liz Cheney to gifted communicator Elise Stefanik,” Trump said in a statement released on Monday. “We need someone in leadership who has experience flipping districts from Blue to Red [sic] as we approach the important 2022 midterms, and that’s Elise!”

Cheney did not support Trump’s first impeachment, and voted for his agenda more frequently than Stefanik.

A vote on Cheney’s successor could come as early as Friday, after Republicans hold a candidate forum, or it may be held over until next week.

Stefanik, who has been asking colleagues for their backing, appeared confident. “We have broad support,” she said.

The leadership post Cheney is likely to lose is little-known outside Washington, with a scant policy portfolio. It has only a modest modern history in being a springboard to higher leadership positions, and even has been a dead end for some.

While she will remain in the House, she faces a potentially competitive primary in Wyoming in 2022  as other GOP candidates attempt to use fealty to Trump as their campaign issue.

“In the short term it will be a hit, obviously, to truth,” he said. “But in the long term, history will judge this exactly what it was, which was a really dumb move by a party that is trying its best to be irrelevant.”

US Republicans and voting to impeach Donald Trump: will they or won’t they?

Trump’s trial in the Senate will begin on Monday when House impeachment managers deliver their single article accusing him of inciting the January 6 ...
World
4 months ago
Next Article