Beyond their disease prevention benefits, masks in the US have become symbols of political views and morality 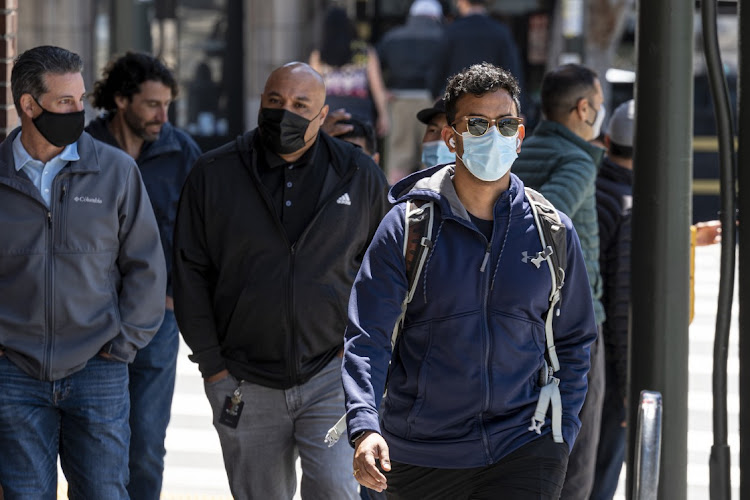 Washington — Anita Glick felt somewhat liberated as she walked her friend’s dog around Washington’s Capitol Hill neighbourhood this week, her face mask looped around a wrist thanks to US health authorities’ new guidance on outdoor mask wearing.

But even under the eased US Centers for Disease Control and Prevention rules, which say people like her who are vaccinated against Covid-19 need not wear masks outside in most cases, the 70-year-old retired teacher said she would keep hers on around others as a courtesy.

“I don’t really want to make a total stranger go through, ‘Should I cross the street? Has she been vaccinated? Could she be infected?’”said Glick, fully inoculated since February.

She added that she might keep wearing masks in the future to help with her seasonal allergies, even though “they’re a pain, and they fog up my glasses, and if I've just eaten something I’m smelling it all day”.

Many vaccinated Americans started tentatively shedding their masks this week, a major break from behaviour they were conditioned to exhibit for more than a year to help curb the coronavirus pandemic.

Beyond their disease prevention benefits, masks in the US have become symbols of political views and morality. Those associations have made it harder for some people to take off their masks, despite the developing scientific guidance.

Interviews with more than a dozen people in and around the nation’s capital revealed a variety of reasons why some Americans are reluctant to remove their masks — or never felt compelled to wear them outside in the first place.

Long worried that the CDC was premature in saying wearing masks outdoors was not necessary unless in crowds, since Covid-19 is still a very real risk, particularly for immunocompromised people.

“You feel naked if you don’t go outside with a mask on,” Barber said.

The CDC’s rule change has tested Americans’ faith in the Covid-19 vaccines, which have been administered to more than 148-million people in the US. Some who are vaccinated noted the rare cases where inoculated people contract the virus as their reason for feeling uncomfortable without a mask.

“I don’t think I'm Superman,” said Andrew Nussbaum, his mask nearby as he drank coffee at an outdoor table in Great Falls, Virginia, a suburban community some 20 miles from Washington.

Nussbaum, who is vaccinated against Covid-19, said he was recently alarmed when he went to a friend’s house and learnt that some at the indoor gathering had not gotten their shots.

“I still worry that I will pick it up, I might be one of those weird cases,” he said.

Vivi Smith, a 60-year-old lawyer in Washington, said the CDC lost some credibility with her when it “flip-flopped” on masks at the start of the pandemic. The agency and other health officials initially said the public did not need to wear masks, but later walked back that guidance and attributed it to their concerns over mask shortages for healthcare workers.

Smith wore a mask as she and several friends planted elderberries at her local community garden last week. Although they are fully vaccinated, she knows many in her area who are not and does not want to take a chance.

“I respect your right, right now, to follow the CDC and not wear a mask outdoors,” she said. “But if I see you coming, I'm crossing the street!”

The new guidance also rang hollow in some suburban and rural areas where mask-wearing was less common outdoors, and in conservative states and counties where the practice was never widely adopted.

Many Americans in those places saw mask mandates as infringing on personal liberty, views encouraged by former president Donald Trump, who said mask use should be voluntary, undermining the advice of his public health advisers.

Erin Lobato said the CDC announcement had not changed her life in Great Falls. She said she rarely wore a mask outside, although she is not vaccinated, and never felt the peer pressure to do so that she said she had heard about in larger, more liberal cities.

“It's nice to be able to see that the CDC is catching up and hopefully enabling all of us to get back to some sense of normal soon,” said Lobato, who runs a local nonprofit promoting the town.

City-dweller Tobias Krahnke felt a different kind of relief. Previously, the economist said, he had been wary of giving any appearance that he supported the conservative, anti-mask movement. But this week he felt empowered to go maskless while playing tennis at a DC park.

“You don’t want to be associated with a Trump voter,” he said. “But now you can just say ‘Look, I’m just following the CDC guidelines.’”

Riot police responsible for deaths in protests in Colombia

In a sign the US jobs market recovery is accelerating, weekly claims drop to a pandemic low of 498,000 last week
World
1 month ago