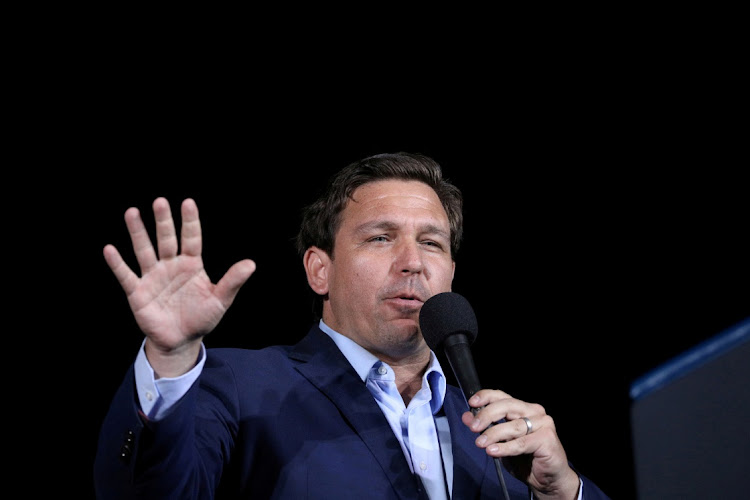 Washington — Shut out of power in Washington, Republicans are using their dominance in state houses across the country to oppose Democratic President Joe Biden’s agenda and appease the diehard supporters of his Republican predecessor, Donald Trump.

In Texas, Republican legislators are pushing for legislation that would allow citizens to carry a handgun without a permit or any training.

In Florida, Oklahoma and Iowa, Republican legislators passed bills granting immunity to drivers who hit protesters, part of a wave of Republican-led legislation aimed at cracking down on public protests of the kind that followed the police killing of George Floyd. Across the country, a bevy of states have passed bills preventing transgender athletes from playing high school sports.

And on Thursday, Florida’s Republican governor Ron DeSantis  signed a sweeping new reform bill that limits mail-in voting and ballot drop boxes, making the state the latest to restrict voting access in the aftermath of Trump’s false claims that he lost the November election due to widespread fraud.

These actions have made for a stark contrast with the first few months of the Biden administration, which has pursued a sweeping liberal agenda on civil rights, police reform, gun control and voting rights.

Although Democrats control the White House and both chambers of Congress, Republicans dominate the nation’s statehouses. After a dismal showing by Democrats on the state level in the 2020 elections, Republicans now control the legislatures of 30 states and also hold the governor’s office in 23 of those states.

Republicans are using that power to serve as “counterweight to the Democratic trifecta” in Washington, said Dee Duncan, president of the Republican state leadership committee, an arm of the party that supports state legislative candidates.

But civil rights groups, Democrats and even some Republicans say the party is doubling down on a host of hot-button social and cultural issues to only appeal to the party's activist base.

“It’s a toxic combination of grievance politics and the traditional culture wars,” said David Jolly, a former Republican congressman from Florida who left the party over Trump.

So far in 2021, Republican state legislators have proposed or advanced more than 250 bills regarded by activists as being restrictive of LGBTQ rights, 361 bills with restrictive voting provisions, and passed 35 bills to relax gun regulations, according to advocacy groups tracking the legislation.

Meanwhile, the 83 anti-protest bills introduced so far in 2021 are more than double the number introduced in comparable periods of prior legislative sessions, according to Elly Page, a senior legal adviser at the International Center for Not-for-Profit Law.

The trend signifies that the Republican Party, after its surprising performance on the state level in November's election despite Trump’s own loss, continues to believe that it must play to the former president's base to win, says Jacob Rubashkin, a nonpartisan elections analyst in Washington.

“They are going to run not so much on Trump’s policies but on his issues, on his grievances,” he said.

The risk, he said, is that Trump’s voters end up staying home when he isn’t on the ballot next year, while Republican policies undermine the party’s push to woo back the suburban, women and independent voters it has lost to the Democrats, both in Senate elections in 2022 and in 2024.

Duncan contended that voters largely support election reform and anti-protest laws, saying they serve election integrity and public safety. The party also hopes to point to Republican-run states such as Texas and Florida, where the economies are swiftly recovering from the pandemic and schools are open to draw a contrast with Democratic states.

“We are proud to run on the things that we have done,” he said.

Darrell West, director of governance studies at the nonpartisan Brookings Institution, said Republicans have no choice but to exploit divisive cultural issues because they will not be able to run on the US economy, which is poised to grow dramatically in the coming year with Biden in the White House.

“They want to stoke outrage,” West said. “The side that’s angriest is most likely to show up in the midterms.”

Florida, with DeSantis at the helm, is leading the way in advancing right-wing legislation.

Beyond the election measure, Florida passed bills in the last two weeks prohibiting businesses from requiring proof of Covid-19 vaccination in the state and social media companies from silencing conservatives on their platforms.

Florida’s new anti-riot law, which DeSantis called “the strongest anti-rioting, pro-law-enforcement measure in the country”, creates new offences with which authorities can charge protesters, enhances other penalties and immunises drivers from liability if they drive their car into a crowded street.

The office of DeSantis, a close ally of Trump and who has been mentioned as a possible presidential candidate in 2024, did not respond to a request for comment.

After edging Democrat Hillary Clinton in the state by just over one percentage point in 2016, Trump won Florida by more than three points in 2020. Former President Barack Obama, a Democrat, had twice won the state.

Lurch to the right

In Texas, the debate over “permitless carry”, which would residents to carry a handgun in public without a permit or training, is illustrative of the lurch to the right among state Republicans.

On Wednesday, a divided Texas Senate approved the bill on a party-line vote, returning it to the House for review. Governor Greg Abbott has promised to sign it into law, even though most Texans and major law enforcement associations oppose it. National opinion polls consistently show a sizeable majority of Americans favour tighter gun laws in the wake of mass shootings.

Abbott’s office did not respond to a request for comment.

Jolly, the former Republican congressman, said the Republican legislative strategy is less concerned with aligning with public opinion and more focused on galvanising an activist minority of voters.

“They’re doing it so they can have high-profile fights,” he said. “You always have to have an enemy.”

However, some companies say independent contractors enjoy the flexibility and freedom that come with not being an employee
World
2 months ago

Facebook’s policies do not authorise an indefinite suspension, and users must not be left in a ‘state of uncertainty’ about their accounts, according ...
World
2 months ago
Next Article