If farmers deliver, traders make the profits; if farmers can break their deals, they can double their income 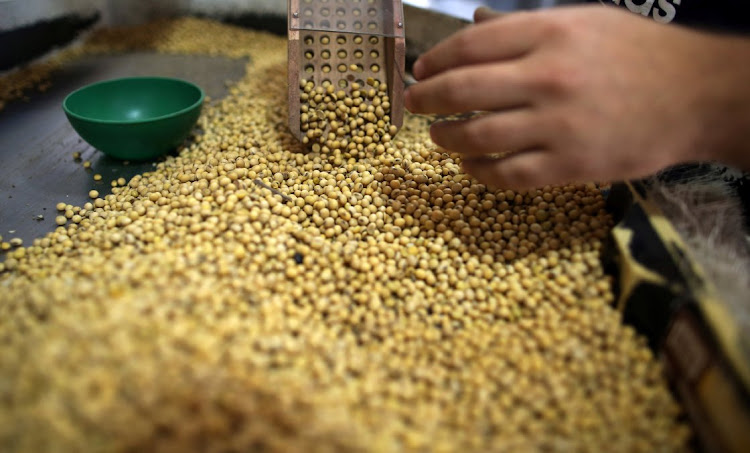 São Paulo — Global grains merchants are using satellites and spies to surveil Brazil’s soybean heartland and deploying an army of lawyers to ensure farmers deliver promised crops instead of finding a different buyer at prices that have doubled since deals were made.

At stake are billions of dollars and the sanctity of crop contracts in Brazil, the world’s top soy exporter accounting for roughly 50% of the global trade.

Soybeans have rallied to an eight-year high and Brazil soy exports have soared, in particular, especially to China, which needs feed to rebuild a pig herd devastated by African swine fever.

If farmers deliver, traders make the profits. If farmers can break their deals, they could double their income.

The disputes have tested a somewhat informal business culture in rural Brazil. Farmers say traders are demanding delivery even when no contracts were signed. There are cases when only a verbal agreement was struck on WhatsApp. Other commitments were made over the phone or by e-mail.

Those deals are much less appealing to farmers now, as prices soared 71% from May 2020, when many were closed.

Traders say farmers should honour their agreements, and lobbyists for top grains merchants such as Archer-Daniels-Midland, Bunge, Cargill and Louis Dreyfus (LDC) detailed the tactics they are using to keep farmers to their word.

Nancy Franco, a lawyer who represents all major trading companies and has been overseeing dozens of lawsuits against farmers reneging on contracts worth millions, said the number of cases against soy farmers skyrocketed to 40 this season from “two or three” in recent years after growers threatened to renege on contracts or asked for higher prices.

“This year traders are a lot more proactive,” said Franco, who declined to discuss specific cases.

Courts have mostly sided with trading companies, but farmers argue that informal contract talks should not be legally binding

The last wave of Brazilian farmer delivery defaults came in 2003 and 2004, when soybean rust disease devastated crops. This year, traders say force majeure clauses apply to a tiny number of farmers, with most looking to cash in on high prices. Traders say trust in the integrity of contracts sustains Brazil’s $45bn soybean industry, from input and machinery sales to crop financing.

Yet farmers have accused buyers of harassing them and violating their privacy to ensure soy deliveries.

In a March police report, a farmer in Goiás alleged intimidation from a contractor hired by Gavilon do Brasil, saying it was filming his farm without permission and claiming rights to his crop, 12,000 tonnes of soy worth almost $7m at current prices, according to court filings related to the dispute.

US-based Gavilon said its contract with the Goiás farmer was legal and binding. It said the soy rally created challenges in Brazil, where it was able to enforce fulfilment of most disputed contracts and get the soybeans it had negotiated for.

In 2020, Brazilian soybean farmers sold an unprecedented volume of crops before planting a seed, as prices seemed attractive. Soon, dwindling supplies spurred an even bigger rally. Traders arrange to buy soybeans in advance to secure supplies and fix purchase prices. Trades are hedged, and commitments to process or export are tied to these contracts.

Sources at trading firms and their lawyers said tough tactics are needed to enforce contracts, formal or informal. Farmers insist that a washout clause gives them the right to exit contracts without paying fines of 30% to 50% of the spot price of the soybeans committed.

“We do not admit calling this contractual non-compliance, this is a contractual resolution,” said Wellington Andrade, executive director of grower group Aprosoja.

“If we hadn’t organised, the supply chain would be disrupted,” said Alessandro Reis, COO of CJ Selecta, the local unit of South Korean group CJ Cheiljedang.

The CJ group bought 4-million tonnes of soybeans in Brazil this season to process and resell to international clients such as Unilever and Norwegian salmon producers. CJ Selecta had about 2,000 active Brazilian soybean contracts and more than 400 farms under surveillance, Reis said, to ensure farmers do not take soy to warehouses owned by another company that pays more.

In February, after watching one grower in Minas Gerais state, CJ Selecta secured a court order to ensure delivery of 3,600 tonnes of soybeans. Court documents show the farmer committed soy to CJ Selecta in May 2020 at between 90 and 95 reais ($17.48) per bag, but later sought a better deal.

Using evidence from WhatsApp messages, Marcus Reis, a lawyer for Brazilian grain buyer Agrobom, obtained a court order to seize thousands of bags of soy from producers seeking to renegotiate prices. Agrobom had contracts to sell soybeans to Bunge and could not afford to buy soy on the spot market if the farmer defaulted, Reis said.

Courts have mostly sided with trading companies, but farmers argue that informal contract talks should not be legally binding.

“There was this WhatsApp chat in February last year with my client trying to sell the soy,” said Nelson Barduco, who defends grower Marcelo Rezende, one of the farmers sued by Agrobom. He said the farmer later rejected a formal contract.

Agrobom said a simple “OK” from a farmer is a real commitment, especially when parties have done business before. Barduco said his client had to accept 80 reais per bag of soy worth double the amount, otherwise the court case could drag on while the soy sat in a storage facility.

Rezende and other farmers named in lawsuits declined to speak on the matter.

A source close to China’s state-run trading house Cofco , who requested anonymity, said defaults are up by “two or three times” from prior seasons. The company invested in monitoring and satellite technology “knowing this season would be challenging”, the person said.

In February, Abiove, an association representing oilseeds crushers and traders, announced the creation of a database allowing members to share information on farmers and certain details about contracts. This angered farmers.

Abiove said the database is legal and managed by a third party. Combined with surveillance efforts, it helped keep defaults below 1% of contracts, said André Nassar, Abiove’s president, adding a similar tool could be used to monitor Brazil’s corn growers.

Abiove members Bunge and LDC declined to comment. Cargill’s president in Brazil, Paulo Sousa, admitted default concerns this year but said cases are “isolated”. ADM did not respond to a request for comment.

Aprosoja criticised the sharing of information from private contracts, saying it may breach data protection laws: “Obviously this monitoring system will serve to blacklist a farmer when he decides to re-discuss the contract.”

Hotels and outside dining at restaurants and bars will be allowed in the country from May 8 and 15, respectively
Companies
2 months ago

HILARY JOFFE: All eyes on what will be a (noisy) crossroads for SA public finances

Workers own shares worth more than R100bn via corporate schemes

Ebrahim Patel says that more than 150,000 are benefiting as companies strive to meet broad-based BEE rules
National
2 months ago
Next Article