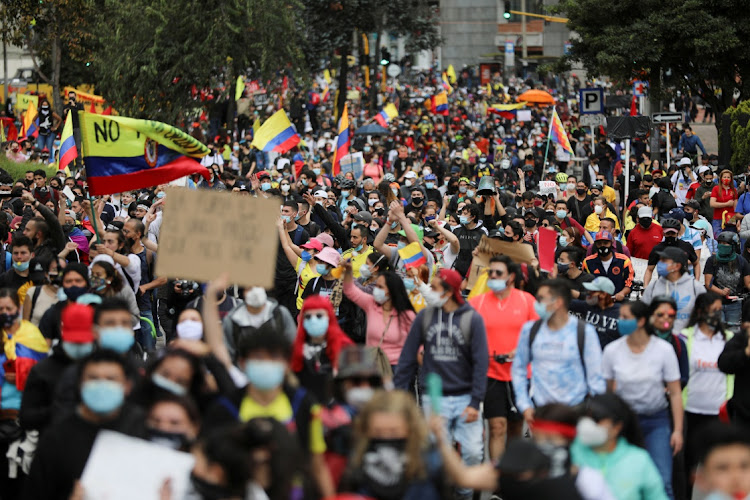 Demonstrators take part in a protest against the tax reform of President Ivan Duque's government in Bogota, Colombia, May 1 2021. Picture: REUTERS/LUISA GONZALEZ

Bogota —  Colombian President Ivan Duque said on Sunday he would withdraw a proposed tax reform after sometimes violent protests and widespread parliamentary opposition, though he insisted a reform is still necessary to ensure fiscal stability.

Duque said on Friday the law would be revised to remove some of its most controversial points — including sales tax on utilities and some food — but the government had previously insisted it could not be withdrawn.

Protests against the reform have led to several deaths around the country since they began on Wednesday.

“I am asking Congress to withdraw the law proposed by the finance ministry and urgently process a new law that is the fruit of consensus, in order to avoid financial uncertainty,” Duque said in a video.

The reform, which the government has insisted is vital to stabilising Colombia's finances, maintaining its credit rating and funding social programmes, remains necessary, Duque said.

There is consensus on the need for temporary taxes on businesses and dividends, an increase in income tax for the wealthiest and deepened state austerity measures, Duque said.

“It is a moment for all of us to work together without malice,” he said.

The central bank warned on Friday failure to approve the reform could have a negative impact on the economy, while a loss of the country's investment-grade credit rating has already been priced in by many investors.

Legislators, unions and other groups hailed the announcement as a victory. Celebratory cacerolazos, a traditional protest where people beat pots and pans, could be heard in some neighbourhoods.

“It is the youth, social organisations and mobilised citizens who have seen deaths and defeated the government,” leftist senator Ivan Cepeda said on Twitter. “May the government not present the same reform with make-up. The citizens won't accept tricks.”

There is not yet a definite national count of deaths connected to protests, amid incidents of looting, destruction of public transport and road blockades in several cities.

Local officials in Cali, the country's third-largest city and where demonstrations have been the most violent, have confirmed three. Another death occurred in Neiva and a police officer was killed in Soacha.

Duque said late on Saturday cities at high risk for disturbances would get military assistance, an offer rejected by Bogota mayor Claudia Lopez.

Coopercuc is one of several women-led co-operatives aiming to help increase the number of trees while also providing a livelihood for the people ...
World
1 week ago

Pact’s success will depend on the commitment of governments and big business, watchdogs say
World
2 weeks ago
Next Article