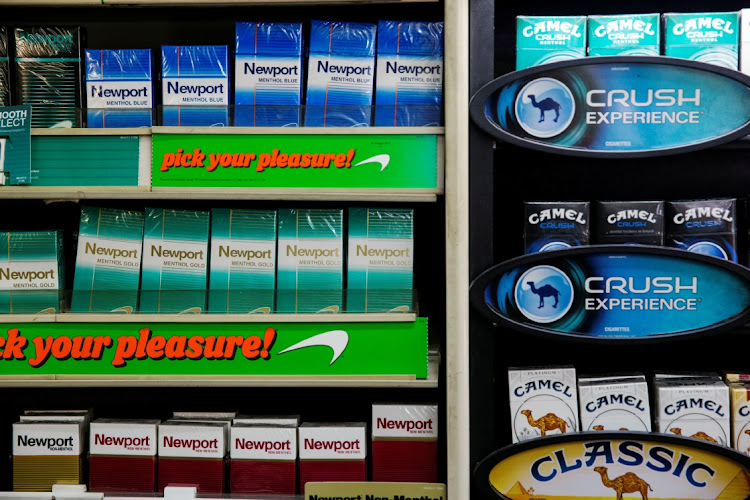 Cigarettes stacked on a shelf inside a tobacco store in New York, the US. Picture: REUTERS/LUCAS JACKSON

Washington — The US Food and Drug Administration (FDA) has moved to ban the sale of menthol cigarettes, citing their disproportionate impact on the health of African Americans.

In its announcement on Thursday, the FDA said it’s “working towards issuing proposed product standards within the next year to ban menthol” as a flavour in cigarettes. It also plans to ban all flavours, including menthol, in cigars. The agency will allow an opportunity for public comment, and a ban would likely take years to take effect.

“Banning menthol —  the last allowable flavour — in cigarettes and banning all flavours in cigars will help save lives, particularly among those disproportionately affected by these deadly products,” acting FDA commissioner Janet Woodcock said in the statement.

She said the ban would save lives and address health disparities in communities of colour and in low-income populations. About 85% of black smokers in the US favour menthols, by some estimates, compared with just 29% of white smokers.

The move comes after more than a decade of inaction. Congress first recommended in 2009 that the agency decide what to do about menthol flavouring in cigarettes, which gives them a minty taste and soothes the throat but can make smoking more addictive, the FDA said.

But the move drew immediate pushback from cigarette makers, including Altria Group, which was in the middle of its quarterly earnings conference call when the news was announced. CEO Billy Gifford said the effect on the industry is unclear at this stage, but he was sceptical that a menthol ban would have the desired effect on public health.

“We don’t think prohibition works,” he said on the call, adding that a ban “is fraught with unintended consequences”.

The company, which makes and sells Marlboros in the US, has cautioned that if there aren’t enough satisfying alternatives for smokers to switch to, they will keep using regular cigarettes or move to black-market products.

“A far better approach is to support the establishment of a marketplace of FDA-authorised noncombustible alternatives that are attractive to adult smokers,” the company said in a statement. It also said youth smoking rates, including menthol cigarettes, are at historical lows.

Imperial Brands, whose US unit, ITG Brands, makes Kool cigarettes, in a statement called the decision “disappointing, but not unexpected”. The company said it believes the rule making process “will reveal that there is no clear scientific evidence to support a federal menthol and flavour ban”.

British American Tobacco (BAT), which owns Reynolds American, in a statement said the scientific evidence “neither shows a difference in health risks between a menthol and a nonmenthol cigarette, nor does it support that menthol cigarettes adversely affect initiation, dependence or cessation”.

The FDA disagreed, saying its decision “is based on clear science and evidence establishing the addictiveness and harm of these products”.

“Menthol acts like a drug when it is smoked,” Woodcock said in a call after the announcement. “It is has anaesthetic qualities and qualities that help mask the irritation of tobacco smoke.”

The FDA also emphasised that a menthol ban won’t lead to increased policing of African American communities because the ban addresses manufacture and sale of flavoured tobacco, not individual use. What’s more, state and local police don’t have authority to enforce FDA law.

US menthol cigarettes make up about 25% of BAT’s profit, 20% of Altria’s and 15% of Imperial Brands’, according to estimates from Jefferies analyst Owen Bennett.

Altria shares in New York were down about 1.9%. Imperial Brands and BAT also ticked lower.

Cigarette makers might have to realign their businesses if sales decline and menthol smokers don’t switch to regular cigarettes or nicotine alternatives, such as e-cigarettes and oral tobacco. About 35% of US cigarette sales by volume are menthols, according to an estimate from Adam Spielman, a Citigroup Inc. analyst.

The FDA in 2009 created a committee to review scientific research on menthol and make a recommendation. In 2011, the agency concluded that removing menthol tobacco products would help public health. Yet the agency never issued a final rule, spurring the lawsuit from the African American Tobacco Control Leadership Council.

“We brought our lawsuit to compel the agency’s determination, and more importantly, to protect the public health. We’re hopeful today that FDA’s announcement is a significant step in the right direction,” said Christopher Leung, a lawyer with Pollock Cohen who brought the lawsuit against the FDA.

A ban also could particularly benefit the health of African Americans of all ages. Studies have shown that tobacco companies for decades have used targeted ad campaigns and lower prices to market menthols to black people.

The ban doesn’t cover e-cigarettes or oral tobacco, where flavours including menthol are still popular. Cigarette companies and foundations that they fund have said it’s important that those continue, as they help attract smokers onto their growing stable of reduced-risk products. Indeed, the results of menthol bans in other countries have shown that many menthol smokers will turn to regular cigarettes without attractive alternatives.

In Canada, a recent study found that almost 60% of people switched to other kinds of cigarettes when menthol was banned in 2017. However, the ban did lead to almost 22% of people quitting smoking. But nearly 20% still smoked menthols, primarily purchased from areas where Canada’s indigenous people live, where they were still available.

In Europe, a ban prompted workarounds from some companies, such as cardboard strips that can be inserted into packs to impart a peppermint aroma. And companies said they weren’t badly affected.

Spielman, the Citi analyst, said a menthol ban would have only a modest effect on smoking rates. He cited the menthol bans in Canada and the EU, where most of the consumption moved to normal cigarettes, according to the tobacco companies.

Pressure on the FDA to act on menthol has ramped up recently. Action on Smoking and Health urged the UN to address menthol as a human-rights issue.

Tobacco companies have used so-called racialised experiential marketing — encouraging consumers to experience or interact with a brand at recreational venues and events, such as concerts, bars and nightclubs — to specifically target certain populations, including African Americans, the group said.

An April 16 letter from 17 US senators to the department of health and human services urged the FDA to ban menthol, saying it would “protect youth from nicotine addiction and tobacco use, reduce tobacco-related health disparities, and save lives”.

Black civil rights organisations also wrote to the agency, saying that menthols have taken a disproportionate toll on the black community. Since smoking increases the risk for severe Covid-19, the urgency of the situation has increased, they wrote.

Michael R Bloomberg has campaigned and given money in support of a ban on flavoured e-cigarettes and tobacco. He is the majority owner of Bloomberg LP, the parent company of Bloomberg News.

While survey shows people are smoking more during the pandemic, global cigarette volumes remain on a downward trend
Opinion
2 weeks ago