Alex Oh had only been on the job for a week, but her departure means the financial watchdog may stop hiring Wall Street defence lawyers 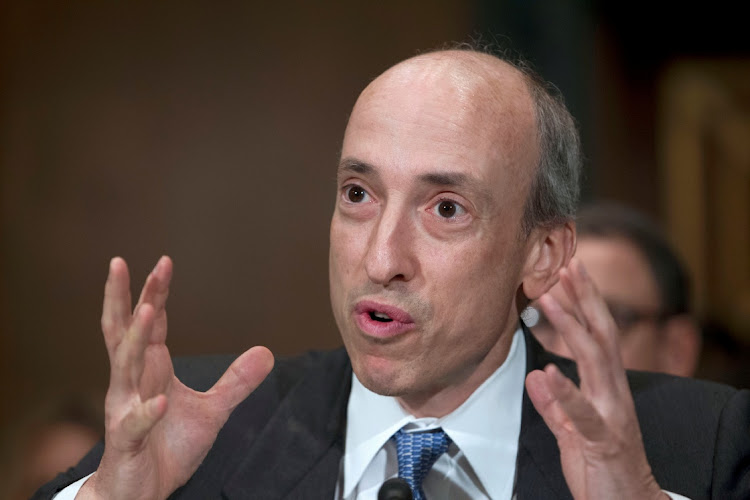 Gary Gensler of the US SEC. Picture: REUTERS/JOSE LUIS MAGANA

Washington/New York — The US Securities and Exchange Commission’s (SEC) new enforcement head abruptly resigned on  Wednesday, citing a complication in a case from her prior legal career, an early and significant setback in chair Gary Gensler’s tenure running the Wall Street regulator.

Alex Oh’s surprise move, announced just a week after she got the job, means Gensler won’t have his preferred pick leading what’s arguably the agency’s most important division. Melissa Hodgman, who was previously serving as acting director of the enforcement division, will return to that role, the SEC said in a statement.

“A development arose this week in one of the cases on which I worked while still in private law practice,” Oh, the first Asian-American woman to head the enforcement division, said in an e-mailed resignation to Gensler that was reviewed by Bloomberg. “I have reached the conclusion that I cannot address this development without it becoming an unwelcome distraction.”

Before joining the SEC, Oh was a partner at Paul, Weiss, Rifkind, Wharton & Garrison, where her corporate clients included ExxonMobil. In that role she was defending the oil company against two-decade-old allegations that it supported killings and tortures in Indonesia, according to court documents.

Her conduct during the litigation was called into question this week by the US district court judge overseeing the case. On April 26, judge Royce Lamberth ordered Oh to demonstrate why she shouldn’t be sanctioned for alleging that her opposing counsel was “agitated, disrespectful, and unhinged” during a deposition without providing evidence.

The enforcement head is one of the most distinguished jobs at the SEC, with the director leading a group of 1,300 officials who investigate violations of securities laws and sanction individuals and firms for misconduct. Former heads of the division have gone on to be the top lawyers at global banking giants, including JPMorgan Chase, Morgan Stanley and Deutsche Bank.

While Oh’s departure represents a headache for Gensler, left-leaning advocacy groups seized on it to push him to appoint someone with fewer ties to firms the SEC regulates. The practice of the agency hiring corporate defence attorneys has long been a sticking point with progressive lawmakers including Elizabeth Warren, the Massachusetts senator and vocal financial industry critic.

US, UK, Switzerland and Japan regulators closely monitoring developments at US investment firm
Companies
1 month ago
Next Article