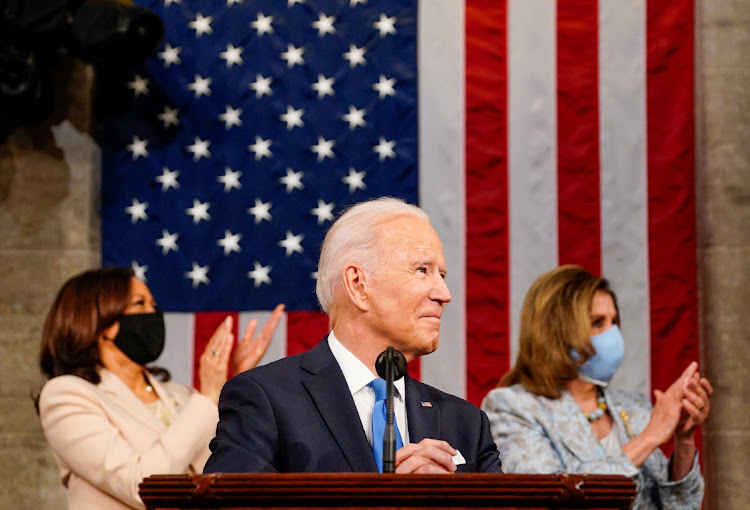 President Joe Biden addresses a joint session of Congress, with Vice President Kamala Harris and House Speaker Nancy Pelosi (D-Calif.) on the dais behind him, in Washington on April 28 2021. Picture: MELINA MARA/REUTERS

Washington — US President Joe Biden took the riskiest step of his presidency with a call for higher taxes on the wealthy to fund a massive investment in the nation’s social safety net, betting he could sell the American public on sweeping change following a pandemic that exacerbated economic and social divides.

Biden devoted his first address to a joint session of Congress to a call for a “a once-in-a-generation investment in our families”, prescribing trillions of dollars in new spending for infrastructure spending, child care, paid leave, community college tuition, and a bevy of subsidies for working-class families.

And in a full-throated confrontation of Wall Street, Biden said the nation’s wealthiest taxpayers and companies should foot the bill. He declared investors “didn’t build this country” and said the wealthy had lined their pockets during the pandemic without paying their fair share.

“I stand here tonight before you in a new and vital hour of life and democracy of our nation,” Biden said.

The speech was delivered to a House chamber where heightened security and social-distancing measures underscored the disease and division still confronting the nation. It amounted to an audacious gamble that Biden can harness public support not only for trillions of dollars in new federal programmes for lower- and middle-income Americans, but the biggest tax hikes in decades.

But his ambitions rest on a narrow Democratic majority in the Senate, where the defections of only a single moderate or two would mean failure.

Biden painted the deadly course of the virus as embodying and exaggerating the inequalities that have broadened in recent decades, with working-class Americans shouldering economic and health insecurity while the wealthiest flourished. At risk is not only his vision for rebuilding the economy, but the razor-thin advantage his party holds in Congress ahead of the 2022 midterm elections, when Republicans are well positioned to retake the majority at least in the House.

“Doing nothing is not an option,” the president implored.

Biden’s effort was in many ways a break from the cautious centre-left triangulation that has defined Democratic presidential politics since the so-called Reagan Revolution. His calculation is that voters battered by the virus just a decade after a painful recession are no longer as concerned about deficit spending or retaining low tax rates for a tier of wealth that seems increasingly unattainable.

And Biden used one of the biggest bully pulpits he’s provided to offer a presidential validation of the growing influence of the progressive Left, pitching at least $3.8-trillion in new spending, sweeping new changes to the health-care system, and substantial gun-control measures.

Biden’s own tendencies are more conciliatory, and he’s likely to ultimately jettison some of the more ambitious proposals as he seeks to navigate legislation through Capitol Hill — particularly with moderate Democrats already expressing scepticism about new taxes and spending. He took pains to caveat his broadsides against the nation’s wealthiest, saying he was “not out to punish anyone” and, in a line improvised from the prepared text, acknowledged the “good guys and women on Wall Street”.

But he left little room for critics within his party to argue he lacked ambition, and his presidential legacy will now be defined by his ability to deliver a once-in-a-generation suite of new government investments, services and programmes.

The forum for Biden’s call for structural economic change itself seemed designed to underscore the unprecedented moment. Because of coronavirus precautions, only about 200 legislators were invited to attend the speech in person, and some of the Senate’s most powerful moderates — including West Virginia Democrat Joe Manchin and Utah Republican Mitt Romney — were relegated to seats in the upper balcony.

The president’s tone and tenor suggested that even if ordinary Americans weren’t in the room, he felt emboldened by polls that suggest his proposals are popular — and that he himself has been buoyed by a largely successful vaccine campaign that’s administered more than 315-million shots and a stimulus programme that provided more than 160-million cheques to taxpayers.

The president’s approval rating is at 57%, according to a Gallup poll released on Friday, matching his post-inauguration high. And seven in 10 Americans favoured Biden’s initial $1.9-trillion stimulus bill, with only about a third of those surveyed by the Pew Research Center earlier in April saying it spent too much.

His new $1.8-trillion families plan and the $2.25-trillion infrastructure proposal — which he christened a “blue-collar blueprint to build America” — directly targeted two key constituencies: suburban mothers and the white working class of the Rust Belt.

The Bloomberg Dollar Spot Index erased its losses as of noon in Hong Kong, as traders who were betting on a bigger spending plan from Biden cut back on currency risk positions. Treasury futures were little changed and US equity futures maintained their gains.

There’s reason for Biden to direct his appeal to those he said “feel left behind and forgotten”.

The pandemic ushered in not only disproportionate health outcomes — a recent study by Ball State University showed a higher death rate among counties with higher poverty levels — but deepened disparate economic trends.

While the richest 1% in the US saw their wealth increase by $4-trillion, the bottom half of Americans shared just a $471bn increase. Female participation in the labour force has slipped to 57% — the lowest level since 1988 — and 500,000 more women exited the workforce than men during a crisis that saw 10-million jobs disappear.

White House advisers have made no secret about the opening they see.

Chief of staff Ron Klain has spent recent weeks promoting stories that bluntly describe Biden’s plans to hike taxes on the wealthy in a flurry of social media posts.

Economic adviser Brian Deese declined to publicly address any element of Biden’s families plan ahead of its rollout on Wednesday — except a provision to hike capital gains taxes on Americans making more than $1m a year. And political adviser Anita Dunn on Tuesday penned a memo to “interested parties” pointing to recent Fox News polling that showed 56% of respondents backed paying for infrastructure through increased taxes on corporations and 63% supported raising income taxes on the wealthiest Americans.

“We need to make the case, but the American people seem very supportive of the idea that when it comes to long-standing challenges in this country, we need to come together and make the investments we need in order to address them,” said White House economic adviser David Kamin.

Still, the success of Biden’s effort will hinge on parlaying that popular support into votes in a narrowly divided Congress, where Republicans remain loathe to offer any assistance and without them, moderate Senate Democrats like Arizona’s Kyrsten Sinema and Manchin can scuttle any piece of legislation single-handedly.

Both have already voiced scepticism about Biden’s proposed tax increases, leaving open the question of how the White House’s proposals can proceed. And Republicans looked to fan that uncertainty, painting the president’s vision as excessive and ineffective.

“Our best future won’t come from Washington schemes or socialist dreams,” senator Tim Scott, a South Carolina Republican, said in the GOP rebuttal to Biden’s address. “It will come from you — the American people.”

Biden, for his part, said big investments in jobs and infrastructure “have often had bipartisan support” and looked to win sceptics by adopting rhetoric more familiar to Republicans and painting his plans as essential to winning a global battle for the future.

“We have to prove democracy still works,” the president said. “That our government still works — and can deliver for the people.”

Aided by advisers keen to address economic disparities, US president plans to take from the rich to give to the poor
World
1 week ago
Next Article