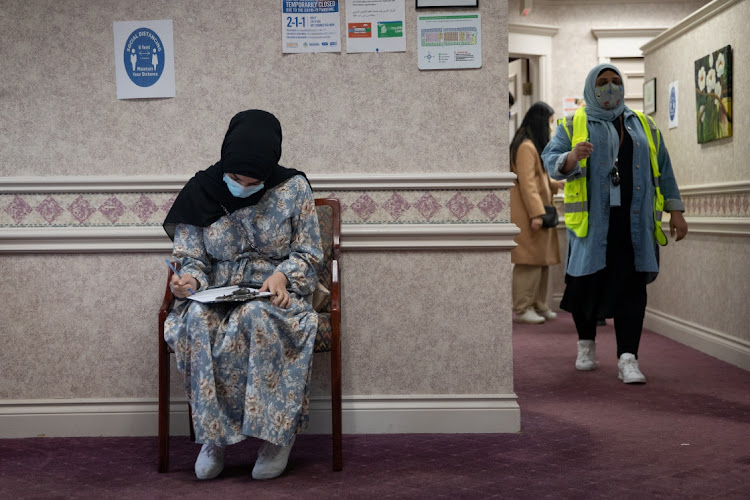 Fadak Aljavery fills out forms before she is vaccinated against the coronavirus disease (COVID-19) at a clinic hosted by the Arab Community Center for Economic and Social Services (ACCESS) in Sterling Heights, Michigan on April 20 2021. Picture REUTERS/EMILY ELCONIN

New York — Thirteen months and two presidents into a once-in-a-century public-health crisis, toxic politics still bedevil effective policies against Covid-19 — an indication of the challenges the US will face in any future pandemic.

Michigan governor Gretchen Whitmer, a Democrat targeted in a kidnapping plot due to her early lockdown, has lost the will to impose new restrictions even as the virus surges there. In California, Republicans are pushing to recall governor Gavin Newsom for his strict response. And Florida governor Ron DeSantis, who still eschews a mask mandate, is claiming vindication because his state’s death toll was lower than many Democratic bastions — making him an early favourite for the Republican presidential nomination in 2024.

But as politicians jockey over whose states performed best, a key takeaway seems to be that the entire country fared worse than it should have.

Even the nation’s vaccination race against fast-spreading variants is shaped by party affiliation: about 29% of Republicans say they definitely won’t get the jab, compared with about 5% of Democrats and 9% of independents, according to a poll last month for the KFF Covid-19 Vaccine Monitor.

“Something as simple as mask-wearing became so political,” said University of South Florida epidemiologist Jason Salemi. “It became such a reflection of whose side you are on, instead of ‘we’re all in this together.’”

The ranking of states by deaths per capita defies tidy conclusions. If the numbers show anything, it’s that states aren’t directly comparable; they should be measured only against their unique expectations. Hawaii saw the least loss of life relative to its population — probably because it’s an island. No amount of restrictions can turn California into New Zealand. And the outcome in Florida was likely the product of its Sunshine State advantages as much as its governor’s policies.

There’s no better illustration than Michigan of how political divisions perverted the response to Covid-19. For the past month, Whitmer has rejected calls for new rules — a stark departure from her earlier approach — even as cases and hospitalisations surged. She advised Michiganders to avoid indoor restaurant dining for a few weeks and log into high-school classes from home, but stopped short of mandates.

The pressure on Whitmer has been intense. A year ago, then-president Donald Trump attacked Whitmer and tweeted “LIBERATE MICHIGAN!” Soon after, armed anti-lockdown protesters entered Michigan’s capitol, and the FBI said in October it had foiled an attempt to kidnap and possibly kill her.

“The governor of Michigan was surrounded,” said Ali Mokdad, a professor of health metrics sciences at the University of Washington’s Institute for Health Metrics and Evaluation, which produces Covid-19 projections. “Even knowing the problem, even believing in science, she had kind of a rebellion at hand.”

Since then, resistance to mitigation has only grown. While the latest surge likely isn’t purely a function of behaviour, residents are doing little to help matters. As hospitals fill, Michigan has largely pushed ahead with reopening, much like the rest of the US.

“A lot of things have changed,” Whitmer said in an interview on Sunday with NBC’s Meet the Press, noting that the legislature won a Michigan supreme court case stripping her of emergency powers used to issue public-health directives. “I don’t have all of the exact same tools,” she said, though she previously had found a workaround when she wanted one.

If DeSantis and his advisers are to be believed, his laissez-faire approach should be a model. Such was the message at an April 12 round-table convened by DeSantis that included two authors of the Great Barrington Declaration, a manifesto for reopening America amid the deadly pandemic.

But viruses simply have a hard time spreading in Florida, meaning its experience might not be replicated. The state is among America’s safest places when flu strikes, perhaps partly because of its uniquely humid and warm climate among a confluence of other factors that work together in somewhat mysterious ways.

In the past five years, its age-adjusted flu and pneumonia fatality rates are the nation’s second lowest — despite an exceptionally low vaccination rate. New York gets about twice as many age-adjusted flu deaths per capita. (Covid-19 has proved far deadlier, but the data is a handy proxy for environmental factors.)

Given Florida’s inherent advantages — and that it dodged the first wave that blindsided the Northeast — the state’s record seems less worthy of braggadocio. Similarly, Arizona and Texas, Florida’s Republican-led Sun Belt peers, do exceptionally well with the flu, but much worse with Covid-19.

DeSantis won credit for locking down nursing homes early, while sparing other residents and the economy. Adjusting for age and gender, Florida comes in 17th in deaths per capita, according to a University of California at Los Angeles paper.

But its most populous county, Miami-Dade, still has a mask order in place that many people follow. “Even though there was a narrative that Florida was wide open and nobody was paying attention, I do not believe that was the case,” said Salemi, the Florida epidemiologist, who runs a popular Covid-19 dashboard.

In an e-mailed response, DeSantis spokesperson Cody McCloud said Florida performed better than both comparably warm areas and those that are less densely populated. “Under the leadership of governor DeSantis, Florida has done it right from the beginning,” McCloud wrote.

Nationwide, pandemic behaviour aligned with whom a resident favoured in the presidential election. Based on phone data, nine of the 10 states that reduced mobility most supported Joe Biden, even though Republican governors lead four of them. Florida was the exception, but broke for Trump by only a slim margin.

The pandemic has been about one-eighth as lethal for the Hawaiian archipelago as it was for, say, New Jersey or New York, largely because every new arrival since March 2020 has had to self-quarantine or show a recent negative Covid-19 test.

“Being an island, in and of itself, is not protective,” said Andrew Noymer, associate professor of public health at the University of California at Irvine. Puerto Rico, for example, so far has had a higher case rate and double the death rate of Hawaii.

Hawaii hasn’t been completely spared. Cases spiked in August and again around the holidays, but the overall number of deaths during the pandemic, regardless of cause, has been close to normal.

That’s a blessing for a state with limited health-care infrastructure — at 219 ICU beds, it’s tied with Vermont for fewest per capita, according to the Kaiser Family Foundation. It would be easy for a hotspot to drive up Hawaii’s death toll, which is under 500.

Its year-round warm weather helped keep Hawaiians in open spaces where the virus can’t spread as easily. But residents also followed public-health guidance to an exceptional degree. Hawaiians reduced mobility the third most in the US after Massachusetts and New York. And the state health department estimates that 79% wear masks correctly.

As the pandemic unfolded, forecasting models attempted to harness information on government policies and phone data to understand the patterns of our unpredictable society. But one of the best focused on the metric that mattered most: deaths.

Youyang Gu, a 27-year-old Massachusetts Institute of Technology graduate with no formal epidemiology training, used his background in high-frequency trading systems to develop a model so narrow and accurate that it consistently beat the pros. For Gu, the best way to anticipate the virus was to abandon the idea that we understand it.

“The pandemic is unpredictable,” Gu said. “There’s only so much you can predict, and, for the most part, people have been more wrong than right.”

Simpler models performed best when projecting deaths, while complex ones often lagged, according to a paper by the Covid-19 Forecast Hub, a project of the University of Massachusetts Amherst’s Reich Lab.

The reason is unclear. Understanding of the virus may still be too poor; some models may have been badly constructed; or data was insufficient.

Different models performed well at different tasks. For the University of Washington’s Institute for Health Metrics and Evaluation, one of the best calls was California. Most of the public was surprised by its November and December surge, but IHME called it by using the same measure that explains why DeSantis’s Florida success story isn’t as impressive as he suggests.

California’s age-adjusted flu and influenza deaths are typically about 57% higher than Florida’s, and it seems to get hit every year around October and November. A Covid-19 surge in that time frame was predictable, said IHME’s Mokdad.

“It’s not fair to compare California to Texas or Florida,” he said. “The deck of cards worked against it.”

The US, the world’s second-biggest emitter of greenhouse gases behind China, will host a virtual climate change summit this week
World
4 weeks ago

Hundreds of US corporations and executives have  signed a two-page ad that opposes Republican-created laws that would make it harder to vote, ...
Companies
4 weeks ago
Next Article