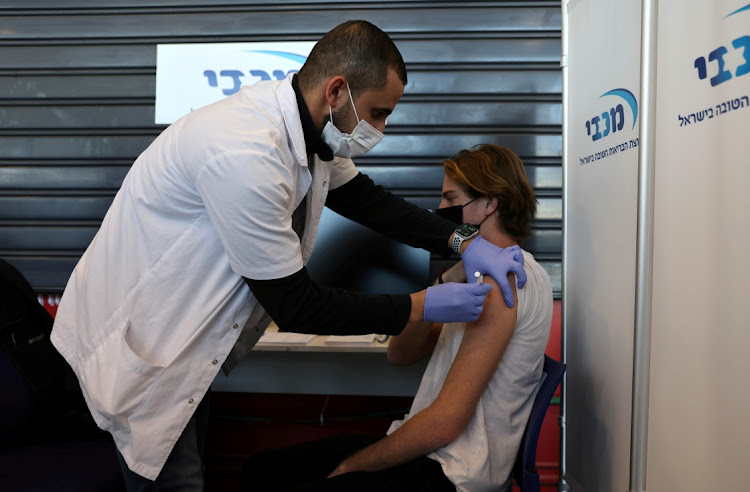 A teenager receives a vaccination against the coronavirus disease in Tel Aviv, Israel, in this photo taken on January 24 2021. Picture: REUTERS/RONEN ZVULUN

Tristen Sweeten, a 34-year-old nurse in Utah, hopes her three children will receive Moderna’s Covid-19 vaccine through its paediatric clinical trial. The sooner the better, she said, for their safety and the greater goal of ending the pandemic.

Angie Ankoma, a 45-year-old black mother of four who works in philanthropy in Rhode Island, believes trials must include diverse populations, and participated in one for a Covid-19 vaccine herself. Volunteering her children for possible inclusion in Moderna’s trial was a tougher call.

Sweeten and Ankoma are among thousands of US parents who volunteered to have their children participate in new trials run by Pfizer with BioNTech or Moderna, the first companies making strides towards developing a safe Covid-19 vaccine for the country's 48-million children under age 12 years.

Health officials say vaccines are crucial to ending the pandemic. But many are concerned that vaccine hesitancy in some adults will be even more pronounced when it comes to their children. Parents may question the risks vs benefits, given the unknowns about the vaccines’ long-term effects on children’s development and data on how few young children have been hit hard by Covid-19.

To ease those concerns, some scientists say the US Food and Drug Administration should slow the review process for paediatric Covid-19 vaccines.

Pfizer spokesperson Jerica Pitts said it was premature to speculate on an approval pathway for children, but the company planned to work with public health institutions to promote the importance of vaccines.

Moderna research scientist Dr Jacqueline Miller said the company had talked to the US Food and Drug Administration (FDA0 about the best way to clear the vaccine for use in children. She said the company hoped to make the vaccine available to children through emergency use authorisation (EUA) that got it to US adults in record time, in part to be able to get kids back to school “and the things that they all are longing to be doing”.

Sweeten’s husband Scott is a clinical researcher whose company has worked on the Johnson & Johnson and AstraZeneca adult vaccine trials, so the couple, whose children are aged 5, 8 and 10 years, are comfortable with how they were developed, Tristen said.

Ankoma consulted her paediatrician given her nagging doubts about unknown long-term effects. She ultimately decided the risk was worth it to immunise her four children aged seven to 16 years.

“It was easier for me to decide for myself than it was for the kids, because ... it was my own body,” she said.

Researchers leading paediatric trials for Moderna and Pfizer in children as young as six months feel confident the vaccines will be just as safe and effective for children as they have been for adults.

Pfizer’s vaccine, already available to people aged 16 years and up in most US states, was found to work well in children 12 to 15 years old and may receive regulatory authorisation for that age group as soon as May.

Moderna and Pfizer have said vaccines could be widely available to even younger children by early 2022.

An Axios/Ipsos poll from April 2-5 found that just 52% of US parents said they were likely to get their children vaccinated as soon as the vaccines became eligible.

Children under 12 years have so far been at relatively low risk from the coronavirus.

Still, 284 children have died from Covid-19 since last May, about 0.06% of all Covid-19 deaths, according to American Academy of Pediatrics data from about 43 states. There were 14,500 hospitalisations among children in 24 states during that time, about 2% of the total.

“It is certainly not correct to say it's benign in children. Anyone that has worked in a children's hospital can tell you how many sick kids we’ve taken care of,” he said.

Children already receive vaccines for illnesses that have similar or lower levels of related mortality in children, such as hepatitis A, varicella, rubella and rotavirus.

Health officials warn that if left unvaccinated, children could be a reservoir for infection, allowing virus variants that may evade vaccines to circulate and grow.

That these vaccines will have been widely used in adults before being made available for children should reassure parents, said Emmanuel Walter, head of Pfizer’s paediatric vaccine trial at Duke University.

Some other vaccines have been developed for and only given to children, such as the chickenpox shot.

More than 63-million Americans have received the Pfizer vaccine and about 55-million the Moderna shot.

The trials for young children are more involved than for adolescents because they begin by testing very small doses and gradually increase the dosage while monitoring for side effects.

“What we’re trying to find is that Goldilocks moment when we have just enough vaccine to generate a really good immune response, but we don’t have so much that we’re causing a lot of fever and arm pain and distress in the baby or in the younger child,” said Buddy Creech, a Vanderbilt University professor working on Moderna’s paediatric trial.

Some scientists said waiting for standard approval instead of seeking an EUA would add months to the timetable but allow for gathering more safety data that could help boost public confidence.

Dr Cody Meissner, head of paediatric infectious disease at Tufts University's medical school, said it comes down to one question: “Does the low burden of disease in children justify a more protracted evaluation of safety?”

The Covax vaccine-sharing initiative needs another $2bn by June so it can buy up to 1.8-billion doses in 2021 amid ‘shocking disparity’
World
1 month ago