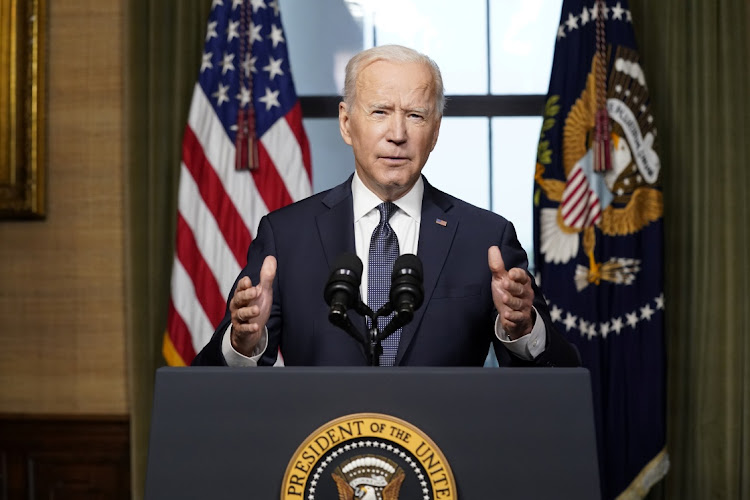 US President Joe Biden delivers remarks on his plan to withdraw American troops from Afghanistan, at the White House, Washington, the US, April 14 2021. Picture: ANDREW HARNIK/REUTERS

Washington — President Joe Biden announced his decision Wednesday to fully withdraw US forces from Afghanistan by the 20th anniversary of the September 11 2001 attacks, declaring it was “time to end America’s longest war”.

Biden said that the “reasons for remaining in Afghanistan have become increasingly unclear” and that only the Afghan people could rebuild their country.

“We cannot continue the cycle of extending or expanding our military presence in Afghanistan hoping to create the ideal conditions for our withdrawal, expecting a different result,” Biden said in remarks from the Treaty Room of the White House.

The announcement was made from the same spot president George W  Bush announced the beginning of US air strikes in Afghanistan almost two decades ago. After speaking, the president  travelled to Arlington National Cemetery to visit section 60, the final resting place for US troops who died in the Afghanistan and Iraq conflicts.

The events are intended to underscore the scope of the country’s longest armed conflict, and Biden — who consulted with multiple former presidents before he made his announcement — said he was unwilling to pass responsibility to another US president.

The September deadline isn’t “conditions-based” and could be completed early, according to a senior administration official who briefed reporters on the condition of anonymity on Tuesday. The official said Biden’s administration concluded it could address any terrorist threat emanating from Afghanistan from elsewhere.

The new deadline means Biden will leave a few thousand troops in the war-torn country beyond the May 1 target set in an agreement between the Trump administration and the Taliban last year. Biden had signalled he viewed that original deadline as “tough” to meet given continuing violence in the country and a lack of progress in peace talks between the Afghan government and the Taliban.

The only US forces remaining in the country after September will be there to protect US diplomats in Afghanistan, but the administration still hasn’t decided on the size and scope of its diplomatic presence or the accompanying military footprint, the official said.

In delaying the troop removal, Biden risks Taliban-led retaliation for breaking the ceasefire agreement struck during the Trump administration, and political fallout from an American public weary from the two-decade long war. But military and diplomatic leaders had said a rushed withdrawal could destabilise the country, leaving allied troops at risk and risking a resurgence of terrorist groups.

President Ashraf Ghani of Afghanistan said he discussed the US decision with Biden and that his country’s defence forces are “fully capable of defending its people and country”.

“The Islamic Republic of Afghanistan respects the US decision and we will work with our US partners to ensure a smooth transition,” Ghani said on Twitter.

US secretary of state Antony Blinken was in Brussels on Wednesday, meeting with leaders of the defence alliance as they worked to co-ordinate the drawdown. Blinken said the US would seek “a safe, deliberate and co-ordinated withdrawal”.

Nato allies agreed on Wednesday that all foreign troops under its command will withdraw from Afghanistan in co-ordination with a US. There are now more than 2,500 US troops in the country, working alongside about 7,000 allied forces from mainly Nato countries, as well as Australia, New Zealand and Georgia. They rely on American air support, planning and leadership for their training mission.

Nato secretary-general Jens Stoltenberg, speaking alongside  Blinken and US defence secretary Lloyd Austin, said the decision was tough. "This is not an easy decision, and it entails risks. As I said for many months, we face a dilemma. Because the alternative to leaving in an orderly fashion is to be prepared for a long-term, open-ended military commitment with potentially more Nato troops," Stoltenberg told a news conference.

Afghanistan’s parliament speaker Mir Rahman Rahmani warned on Wednesday that the troop withdrawal will lead to a “dangerous civil war and Afghanistan will once again become a geography of international terrorism”.

Abdullah Abdullah, the head of Afghanistan’s High Council for National Reconciliation, told reporters on Wednesday that he did “not think the world support will end with the announcement of the withdrawal of US troops from Afghanistan by 9/11.”

Biden’s decision was met with mixed reaction on Capitol Hill, with criticism — and support — cutting across party lines.

“A residual counterterrorism force would be an insurance policy against the rise of radical Islam in Afghanistan that could pave the way for another attack against our homeland or our allies,” Graham said.

Senator Jack Reed, the Rhode Island Democrat who is chair of the Senate armed services committee, said he believes the US would need to maintain a presence in the region “for regional stability”. Senator Jeanne Shaheen, a New Hampshire Democrat, tweeted her disappointment with the announcement.

But other legislators applauded the decision.

“President Biden recognises the reality that our continued presence there does not make the US or the world safer,” senator Elizabeth Warren, a Massachusetts Democrat, said in a statement. “Year after year, military leaders told Congress and the American people that we were finally turning the corner in Afghanistan, but ultimately we were only turning in a vicious circle.”

Beyond ousting the Taliban, who were hosting Al-Qaeda leader Osama bin Laden when the US entered the war, the Pentagon has struggled to sustain gains in Afghanistan over the past two decades. The Taliban are at their strongest since being forced from power, opium production remains high and Ghani’s government has seen its legitimacy erode as it loses control of swathes of the countryside.

Violence has even climbed since peace talks started in September of last year, including targeted killings of journalists, civil society members and politicians. In 2020, 8,820 Afghan civilians were killed or wounded, according to the UN.

Biden’s announcement has thrown into doubt a US-backed peace conference in Istanbul that representatives of the Afghan government and the Taliban were due to attend from April 24.

The Taliban said in a tweet late Tuesday that it wouldn’t participate. “Until all foreign forces completely withdraw from our homeland, the Islamic Emirate will not participate in any conference that shall make decisions about Afghanistan,” wrote Mohammad Naeem, a spokesperson from the group’s Doha political office.

A report on worldwide threats issued by US intelligence agencies on Tuesday forecast that “prospects for a peace deal will remain low during the next year. The Taliban is likely to make gains on the battlefield, and the Afghan government will struggle to hold the Taliban at bay if the coalition withdraws support.”

Deported from Europe, a Kabul resident is pioneering spore cultivation and reaping the rewards of his fungal foray
World
10 months ago