Reforming credit scores is one of US President Joe Biden’s priorities as minorities, women and low-income earners suffer the most 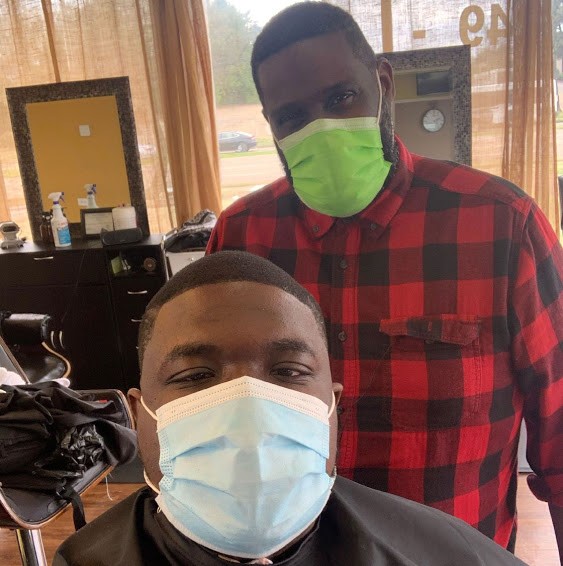 Donald Hall and Vincent Lipford at a barber shop in Memphis, Tennessee, US, March 23 2021. Picture: HANDOUT VIA REUTERS/HOPE CREDIT UNION

New York — A chance conversation with a customer ended up saving Vincent Lipford, a self-employed barber in Memphis, Tennessee, more than $20,000.

The single father was stuck in a sub-prime vehicle loan with a 25% annualised interest rate because he lacked the credit history that would allow him to obtain financing from traditional lenders. The interest would have cost him nearly as much as the Kia Forte itself if he followed the payment plan to fruition.

When Donald Hall, regional vice-president at the Hope Credit Union, strolled in one Saturday for his weekly haircut, he was alarmed to learn about Lipford’s situation. He helped refinance the loan into another deal with an interest rate of just 4.2%, based on his mobile phone and utility bill payment history — factors that firms that determine credit scores and banks ignore.

“That made a huge difference. It took a lot of pressure off me,” Lipford said. “It’s given me more financial freedom to pay some other bills and do some things with my children.”

Reforming credit scores is one of US President Joe Biden’s many priorities as he tries to repair the financial wreckage caused by the coronavirus pandemic, which disproportionately harmed minorities, women and low-income workers, according to government data. During his campaign, Biden talked about creating a public entity that would determine credit scores in a more accurate and less discriminatory way.

As it stands, lenders rely on three big rating firms — Equifax, Experian and TransUnion — to determine creditworthiness. They generate a “Fico” score for borrowers, on a scale of 300 to 850, based on income, savings, assets, loans and history of debt repayment. Scores above 700 are generally considered solid.

The Biden administration wants to create an entity within the Consumer Financial Protection Bureau (CFPB) that would incorporate factors such as rent and utility payments into lending decisions, three sources familiar with the plan said.

Such a move would require congressional approval but CFPB officials are already discussing how it might be set up, the sources said.

Credit reporting firms oppose the move, saying they are already working to provide fair and affordable credit to all consumers. A public credit bureau would be bad for consumers because it would expand the government’s power in an inappropriate way and its goals would shift with political winds, the Consumer Data Industry Association, which represents private rating firms, said in a statement.

Almost half of consumers in low-income neighbourhoods do not qualify for traditional loans under current methods, according to CFPB research. A public entity utilising non-traditional data could change that, experts say.

Changes in the wind

The CFPB has already been examining ways to make the existing system fairer. Rohit Chopra, Biden’s nominee to lead the CFPB, mentioned problems with credit scores during his testimony before a Senate committee on March 2.

Nearly 60% of complaints the CFPB received last year were about errors and other issues with credit scores. Under Chopra, the bureau would push private firms to fix inaccurate information, the sources said.

CFPB officials are also discussing how to use artificial intelligence (AI) in lending decisions, sources said. The bureau may issue guidelines to ensure lenders can use algorithms in a manner that is inclusive and does not reinforce discriminatory practices, they said.

The CFPB declined to comment on any of the issues.

The bureau and other US regulators said last week they are seeking public input on the growing use of AI by financial institutions.

The planned changes could help people such as Andrew Ballentine, a skilled labourer from Cleveland, Ohio, who had his hours cut during the pandemic. Without much credit history, Ballentine was unable to qualify with traditional lenders. Eventually, HFLA of Northeast Ohio, a non-profit, offered him a $1,500 interest-free loan.

“If they weren’t there, I hate to think what would have happened to me,” he said. “I would probably have been evicted.”

No sooner had US President Joe Biden’s $1.9-trillion stimulus package passed than attention turned to his big spending bill for infrastructure — and ...
Money & Investing
1 week ago