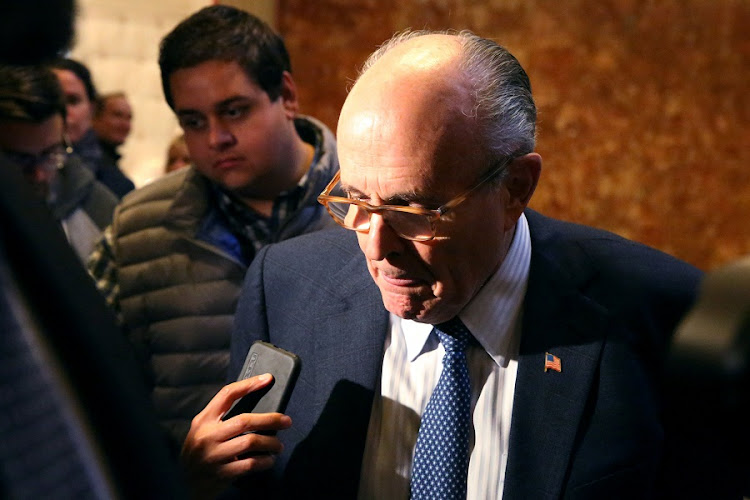 New York — Donald Trump’s lawyer Rudy Giuliani asked a judge to throw out a $1.3bn defamation lawsuit by a voting machine company he accused of helping to steal the presidential election from his client.

Giuliani’s motion to dismiss the suit by Dominion Voting Systems was filed Wednesday in federal court in Washington. The former New York mayor is accused of exploiting false election-fraud claims to hawk gold coins, cigars and supplements on a podcast.

The case is one of several that Denver-based Dominion filed over baseless claims made in the aftermath of the election that it conspired to switch votes from Trump to Joe Biden. The company has also sued Fox News and former Trump campaign attorney Sidney Powell, as well as MyPillow CEO Mike Lindell, all of whom have publicly accused Dominion of helping to steal the election from Trump.

In his Wednesday filing, Giuliani portrayed himself as a victim, claiming that Dominion made 50 “false and defamatory statements” about him in its complaint. He also claimed the lawsuit improperly sought “exorbitant” damages without actually identifying any financial harm it suffered as a result of the lawyer’s claims about Dominion.

The filing didn’t attempt to back up any of Giuliani’s wild claims about Dominion, but it suggested he may do so later if the case continues.

“Should this matter reach legal or factual adjudication on the merits, Giuliani will provide a vigorous and complete response,” his lawyer, Joseph Sibley, said in the 10-page filing.

Claims of widespread voting fraud advanced by Trump, Giuliani, Powell and others were rejected by dozens of judges across the country. Trump’s attorney-general, William Barr, also said there was no evidence to support such claims.

The suit against Giuliani was filed a few weeks after the conspiracy claims helped inspire the deadly January 6 insurrection at the US Capitol. Trump and Giuliani both spoke at a rally that preceded the riot.

Fox News has defended its coverage and moved to dismiss a similar suit filed by a Dominion competitor. Powell is seeking to dismiss the suit against her, saying “no reasonable person” would believe her claims were “statements of fact”. Lindell has also denied Dominion’s claims.

Dominion has raised the possibility of suing Trump himself. In December, it sent a letter to the White House asking that documents be preserved for possible litigation. It sent similar letters to Fox News and competing conservative media outlets such as One America News and Newsmax, as well as individual commentators.

Some of Trump’s most fervent supporters, 200 of whom have been charged, have moved quickly to cast blame on the president and his rhetoric
World
1 month ago
Next Article