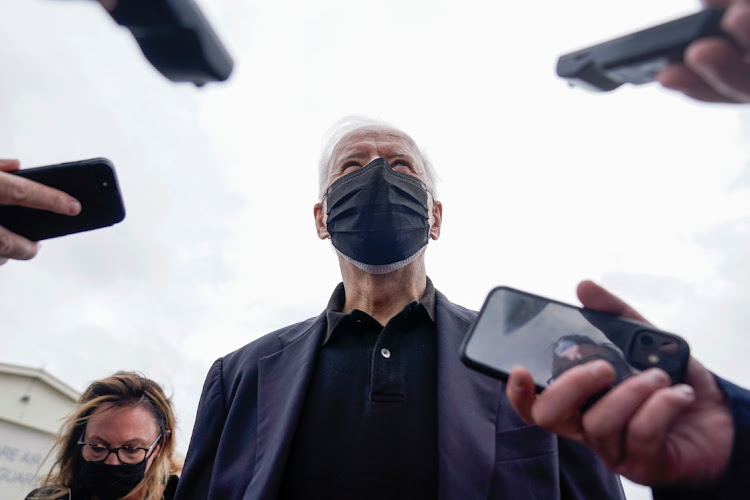 US President Joe Biden speaks to the media as he boards Air Force One upon departure for Washington, DC on March 28 2021. Picture: REUTERS/JOSHUA ROBERTS

Washington — President Joe Biden this week will reveal the scope and ambition of his plans to expand and reorient the US government, setting the stage for a bitter fight on Capitol Hill that could define his presidency.

Biden will unveil the framework for a major infrastructure-and-jobs programme on Wednesday in Pittsburgh, and later in the week offer the first glimpse of his 2022 budget, which promises to redirect federal funds to areas such as climate change and health care.

The announcements will offer the first concrete details of Biden’s plan to overhaul federal spending, in a sales pitch without the immediacy of the pandemic emergency he had for his first package. To succeed, Biden will have to convince the public and legislators on a multitrillion-dollar investment in infrastructure and social safety nets, along with a revamp of the tax code to help tackle funding needs and widening inequality.

“Successful presidents — better than me — have been successful in large part because they know how to time what they’re doing,” Biden said last Thursday when asked why he was pursuing the huge spending package instead of other legislative priorities, such as gun control. Infrastructure is “the place where we will be able to significantly increase American productivity, at the same time providing really good jobs”.

While Biden has made clear his plans will include tax policy changes to help fund what aides have laid out as a roughly $3- trillion long-term programme, how specific he will be on Wednesday is uncertain. His budget plan also will not include a comprehensive breakdown about the agency-by-agency spending increases the administration is seeking.

Republican legislators are already greeting Biden’s intentions with stiff opposition, as they look to build a case against tax and spending increases ahead of the midterm elections in 2022. The GOP needs just one seat in the Senate and a handful in the House to retake control of Congress and cripple the rest of the Biden agenda.

And even keeping Democrats united will be a challenge, given rising deficit concerns among moderates and escalating demands for higher spending from progressives.

Justice Democrats want $2-trillion in climate change initiatives alone. The Sunrise Movement has called for a $10-trillion bill — investing $1 trillion a year in infrastructure and climate change efforts. Some legislators are pushing a major Medicare expansion.

White House aides have discussed breaking Biden’s proposal, dubbed “Build Back Better”, into two separate pieces of legislation, after Republicans signalled they thought the administration was trying to shoehorn “social infrastructure” — such as child and elder care — into the package.

The idea: one bill with strong bipartisan appeal, centred on physical infrastructure such as roads, bridges, waterways and broadband internet, with the other containing tax benefits for the poor and a strengthening of the social safety net. The latter, which would feature the largest tax hikes since 1993, would likely need to pass by a party-line vote.

Senate Democrats could use the same budget tool they used to pass the stimulus bill with just 51 votes — including the support of vice-president Kamala Harris — to enact part of the jobs bill. Senate majority leader Chuck Schumer is exploring whether he has the option of doing more than one such budget reconciliation bill before September 30, according to a Schumer aide.

“There are badly needed investments in our infrastructure, in R&D, in our workforce” that could lift productivity and job growth, White House economic adviser Cecilia Rouse said on Friday. “That is the focus of the next round.”

West Virginia senator Shelley Moore Capito, the top Republican on the committee responsible for transportation infrastructure, said she is concerned the administration is trying to slip social programmes under the infrastructure hood.

“We’ve got to define what infrastructure is and has been over the years, and one of those is, I mean, it wasn’t free public school and pre-K [pre-kindergarten],” Capito said.

Biden’s budget office also plans to send to Congress its request for regular 2022 agency funding. That comes at a pivotal moment: it is the first time in a decade without the budget caps that were put in place by an agreement between the Obama administration and congressional Republicans. This year’s cap was $1.298-trillion.

Defence spending is expected to come in largely flat, a rebuff to Republican demands for a 3%-5% increase above inflation. Richard Shelby, the top GOP senator on the appropriations committee, called for equal treatment with non-defence outlays if Biden moves to boost those.

Meantime, progressives advocate a significant shift of defence resources to the state department for aid and diplomacy. About 50 House Democrats sent Biden a letter earlier in March urging him “to seek a significantly reduced Pentagon top-line”.

Biden has signalled that one priority for his administration will be the fight against cancer, an issue with personal salience for Biden, who lost his son Beau to glioblastoma.

During a visit to a cancer hospital in Ohio earlier in March, Biden floated the idea of a federally backed health research agency that mirrored the experimental role the Defense Advanced Research Projects Agency plays for the defence industry.

The effort would “deliver health breakthroughs to find cures for cancer and other diseases by investing billions of dollars that companies are not willing to”, Biden said.

That effort would likely be in addition to a boost he has pledged for the National Institutes of Health’s (NIH’s) National Cancer Institute, building on the $1.8bn he secured as vice-president for a “moon shot” type initiative launched in the wake of his son’s death.

Other areas of NIH and the Centers for Disease Control are also expected to receive a funding boost, with money focused on emerging disease detection, treatment research, and stockpiles of supplies and equipment depleted during the Covid-19 crisis.

And the budget could provide some insight into how or whether the president aims to boost efforts to process child migrants at the US-Mexico border, or address Democratic priorities such as prescription-drug prices and health-care costs.

The 2022 budget proposal this week will not contain the tax revenue, mandatory entitlement-spending figures and deficit-reduction proposals that come in the usual full 10-year budget vision from the White House. That is expected later in 2021.

Amid all the looming changes, one element will be familiar to Washington watchers. If there is no agreement on spending levels, there is at least some risk of a government shutdown, after the October 1 start of the new fiscal year.

At his first White House news conference, the US president also compares Xi to Putin and takes aim at Republicans' tactics
World
8 months ago